Anyone for a TT? 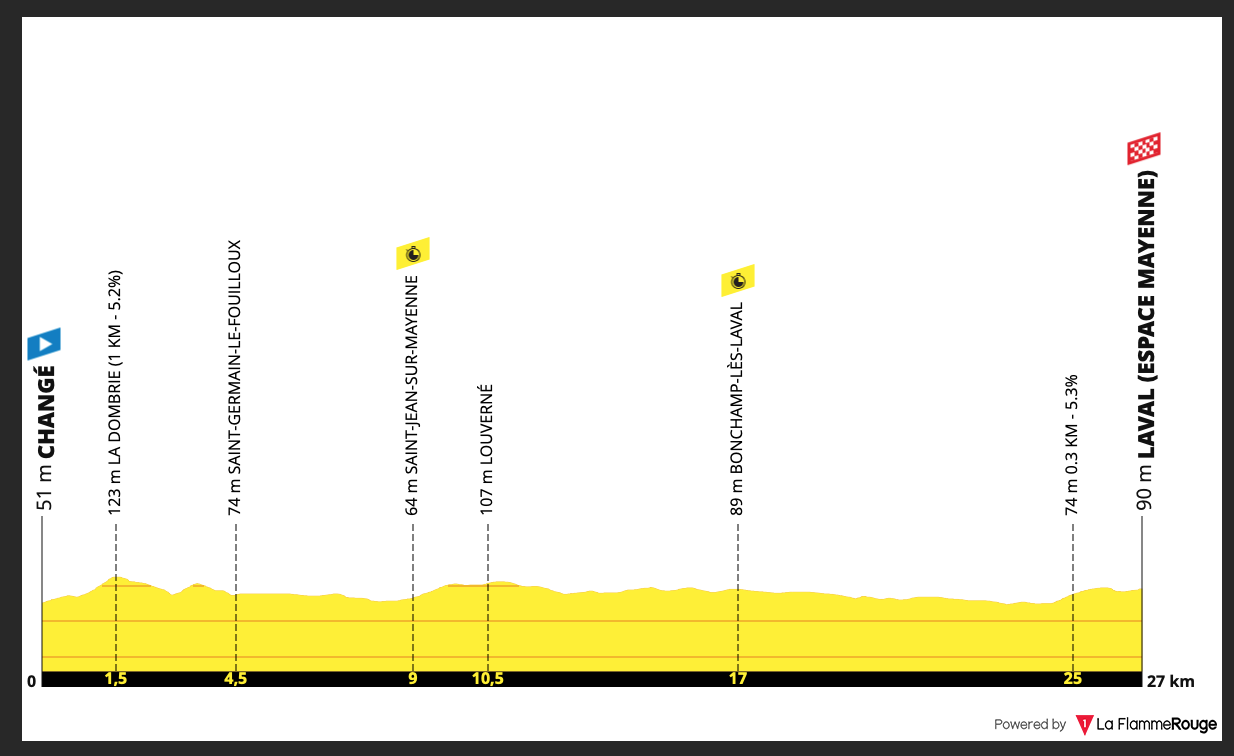 27km in length and full of little lumps, this TT offers hope for the non-specialists. The profile above doesn’t really do the hills justice, the one below gives a better indication of what the riders must tackle. 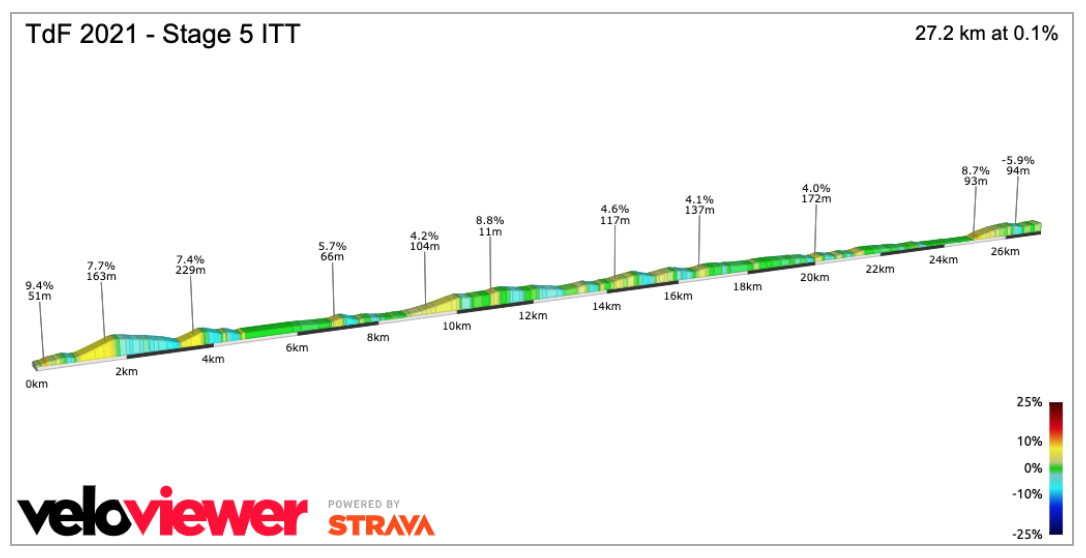 The climbing starts immediately, and the hardest climb tops out after just 2km, this hill is close to 1km at 6%. The route isn’t flat, rolling is the best way to describe it. It looks fairly like the Dauphiné TT, a stage that produced a surprise winner. GC riders will like the look of the day, the hills will give them a chance of limiting their losses, but as it’s 27km in length, those that have a bad day will ship a lot of time.

Should be a sunny day and the wind will be consistent for all. One report does suggest the possibility of rain, but most say it will be dry.

Stefan Küng – he’ll see this as a huge chance to win his first grand tour stage. Confidence will be high, his results this season have been very good in this discipline. Küng will have this stage as a massive target, is the time right for him to land a big one?

Stefan Bissegger – the young pretender. He’s taken well to riding at this level, but can he really win a grand tour stage? The TT is on the long side for him, his recent success has come in shorter events. He’ll be many the favourite for many people, but I’m not too sure.

Wout Van Aert – he has the stage win and the yellow jersey in his sights. He’s 31 seconds behind van der Poel and 23 down to Alaphilippe, this is an enormous opportunity to get his first yellow jersey. Jumbo-Visma’s plan was always for him to try and be in yellow after this stage, that’s why he didn’t wait for Roglič on Monday. He’s done just one TT this year, winning in Tirreno against Ganna and Küng. We all know about his rivalry with van der Poel, he’d love to take yellow off his old foe.

Julian Alaphilippe – his TT win in the 2019 Tour comes to mind, but that route was a little harder than this one. His recent TT results have been good, you can bet he’s hoping to end the day back in yellow. Winning against the pure specialists won’t be easy, but I expect him to be up there.

Tadej Pogačar – for a skinny climber he can put out big watts on the flat. He was 4th in the TTs in the UAE Tour and Tirreno, both of which were plan flat. This is a huge opportunity for Pogačar to take control of the yellow jersey. He won’t be wearing it at the end of the stage, but he’ll hope to put significant time into Carapaz and potentially Roglič. It wouldn’t surprise me to see him finish in the top 3, but I am surprised that he hasn’t done a recon of this stage.

Jonas Vingegaard – TTs very well, but he could be a little on the small side for this one. The route looks hard, but he would prefer a tougher day.

Wilco Kelderman – he won’t win, but he’ll be up there. Kelderman is very consistent on his TT bike, and he’s already shown good form this week. The problem is that there’s always someone going slightly better than him, he rarely wins. In the battle for the yellow jersey, this is a big chance to gain time on some of his rivals.

Søren Kragh – this is his type of TT. The Dane is very strong on his TT bike, and he loves a lump or two. His form this season hasn’t been great, but recent signs have been promising.

Alexey Lutsenko – won the Dauphiné TT which is like this one. That was a massive surprise, Lutsenko isn’t normally that good against the clock. He must have spent a lot of time clocking up the kilometres in training, but I wonder if Astana have a new bike too. He’s looked strong this week; can he deliver another incredible performance?

Ion Izagirre – he was second to Lutsenko in the Dauphiné, technically speaking he’s better on his TT bike compared to his teammate. The Astana pair have spoken publicly about targeting this stage, but can they really beat the long list of rivals?

Brandon McNulty – has been brilliant in this discipline in 2021, but his current form doesn’t seem as good as he would hope.

Kasper Asgreen – another specialist who’ll like the look of this TT. The Dane is very strong against the clock and could well take the win. He’s been TTing well this season, but still won’t be classified as one of the main favourites, but that could well be a mistake.

Primož Roglič – he looks pretty bashed up, holding his TT position will be very hard to do. I don’t see him competing for the win because of his injuries.

I think we’ll see Wout Van Aert win the stage and move into the yellow jersey. Jumbo-Visma have reconned this stage, the eye is in the detail.

Cycle Pal:
David got it right! And it was Mark Cavendish too, so we’re giving away an extra care package. Winners of the £85 Cycle Pal care packages are:
Richard, UK.
Marya, UK.

Winners have been contacted by email.

If you didn’t win today don’t worry, we have faith in David.

To enter for next time David predicts correctly, all you have to do is click the link below and enter your email.

Cycle Pal is a small UK-based cycling company that specializes in unique tools to help you with everyday cycling problems.
If you struggle with changing stubborn tyres, you may be interested in our Tyre Seating Tool, you can find more information here: http://cyclepal.co.uk/cyclepal