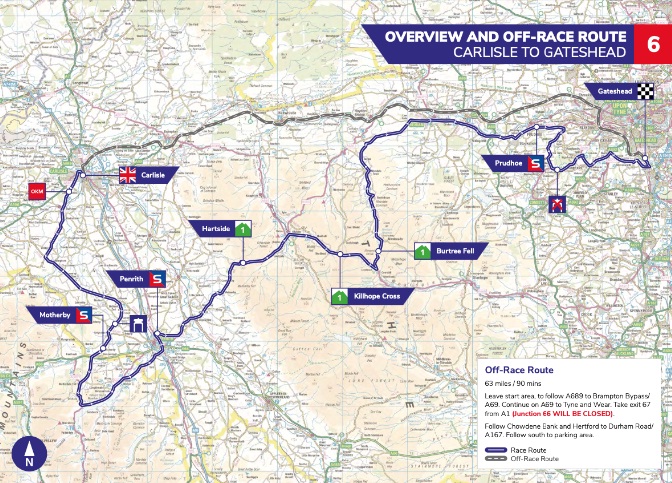 A stage that will interest the breakaway riders.

We have three cat 1 climbs in the middle of the stage, that will make life tough for the pure sprinters in the peloton. Not only that, but the finale also has a few uncategorised climbs. This could well be a good day for the breakaway riders, if it features the world tour teams. Jumbo-Visma have the big favourite in Wout Van Aert, but with only three domestqiues, chasing down the morning break won’t be easy.

Another day with a threat of thunderstorms. It seems that the bunch could get very wet.

Relatively soon after comes the second climb, this one is 5.2km at 5.3%, but the final 2km is much harder. Another short descent follows before the final categorised climb of the day.

The finale of the race certainly isn’t flat. We have some perfect spots for riders to launch a late move, and the final 2km is grippy.

Ineos are now back in control of the race lead, something they’ll be delighted about. Hayter has an 8 second lead over Van Aert, they’ll be very happy for the break to take all the bonus seconds. As Jumbo-Visma only have three domestqiues left, it will be near impossible for them to chase down the morning break. Deceuninck – Quick Step are unlikely to chase either, Alaphilippe won’t win as it’s a flat sprint. This points to one thing, a great day for the breakaway.

For the break to succeed it needs representation from the big teams. Most stages we’ve seen the break form quite easily, not in this stage. Once it does get away, the composition will determine if it succeeds. Deceuninck – Quick Step haven’t got a win yet; this is a good opportunity for them. They have great options for the break, but if they aren’t happy with the break, they have Ballerini as a sprint option, the stage looks too hard for Cavendish.

The attitude of Ineos will be interesting. Yes, they have the race lead, but they’ll want to be involved in the break and hope to get another stage win. They have a couple of very good options who are down on GC, but they can’t go crazy at the start as they might need all their men to chase the move down if a dangerous rider gets in it.

Deceuninck – Quick Step – given the race situation, they should be looking towards Declercq and Lampaert for this stage. Lampy has looked in good form in recent races, but the win has just eluded him. Looking at the final 15km, this is a great stage for him. Then we have Big Tim, I think we’d all be delighted to see him in the break, making the others suffer. If he takes his first pro win, I’ll take a bottle of champagne to the team bus on Saturday!

Ineos – Doull and Kwiatkowski are their best options, if they are given freedom to jump in the morning move. Both have the quality required to win this type of stage, especially as they have a fast sprint.

Movistar – Soler, Cataldo and Jorgenson are their best options. Soler has already been on the attack in this race, as has Jorgenson. If the heavens do open, it plays into the hands of the American, he loves a filthy day.

Wout Van Aert – if it does end in a reduced sprint, Van Aert will be the overwhelming favourite. He might not have much support, but he’ll be unstoppable.

It’s hard to say the break will be successful as it does depend on which teams don’t make the move, but I do think it is likely. I’ll take a win for Matteo Jorgenson.