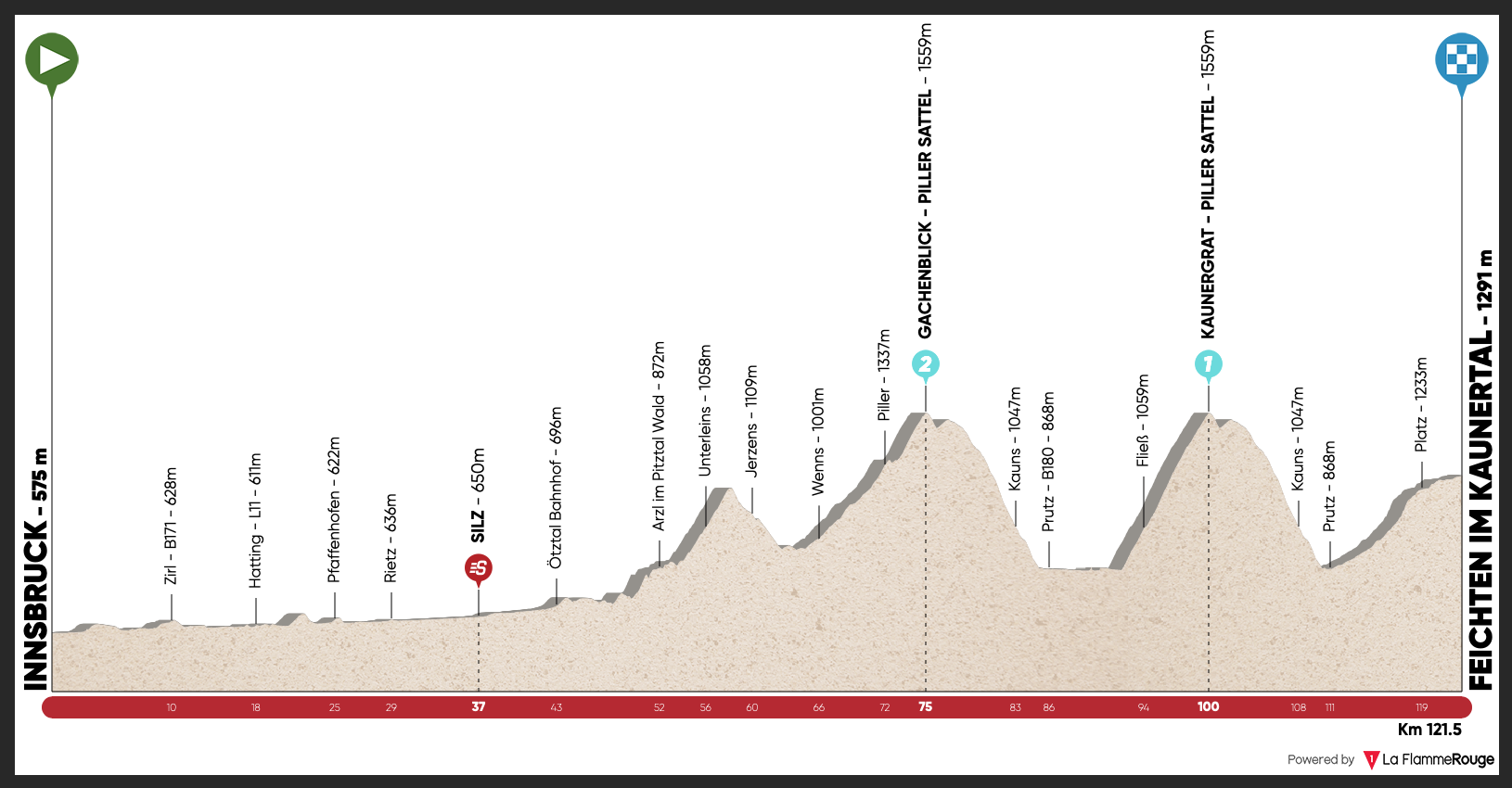 The bunch have a nice start to the day, before the climbing begins.

9.1km at 6.2%, which is hard enough, but nothing compared to what comes next.

7.1km at 9.6% is brutal, this is a serious climb. The initial slopes are incredibly difficult, and it doesn’t really get any easier. The crest comes with 22km to go, which normally means riders don’t go full on the climb, they usually like to leave something in the tank for the finale of the stage.

The descent is narrow and very fast, but thankfully the road surface seems quite nice. It’s not overly technical, but gaps can be created by the better descenders.

The final 7km starts with a bang, but levels off as the riders head towards the finishing line. The hardest section is 850m at 11%, this finishes with 4.5km to go. If one team has multiple riders in the front group they should be able to take the stage.

Cloudy and quite cold up at the top of the mountains. There is a risk of wintery showers, but it looks like the bunch might dodge them.

You need numbers after the final climb, which means we should see some interesting tactics on the climb itself. If you don’t have a particularly strong team then you need to smash the climb and drop the domestiques. If you have a strong team you don’t need to attack, stay in the wheels and save energy for the finale where you can use your numbers.

The flat start isn’t great news for the breakaway, as climbers won’t find it easy to get into the morning move. Given the climbs in this stage, you need to be a good climber to win the stage, which means the break looks doomed to fail.

Once on the main climb of the day, expect to see Ineos do their thing. They have the race leader, but Moscon will be working for others in this stage. They have Basso to set tempo until the climbs, then it will be over to Puccio, Moscon and Henao. Once the domestiques are done, we’ll have to see how they use Sosa, Martínez and Sivakov. If all three are protected riders, it means that the climb will be chaotic, as they don’t have enough workers. I suspect Sosa might be used as a worker, with Martínez and Sivakov as the protected riders. It will be very important for the team to have two riders at the head of the race after the cat 1 climb, three would be even better, but hard to do.

Looking to upset them will be Yates, Carthy, Vlasov and Quintana. These guys all have the ability to attack and blow the bunch to pieces. The climb is excellent for Carthy, he is a specialist at long and very steep efforts, just think back to the Mortirolo and Angliru. They know that Ineos could potentially hold the upper hand, it’s up to them to make the climb so hard that Martínez and Sosa don’t survive.

Ineos – I would imagine that Sivakov will be their main man, but the road will decide. He has an okay sprint, but not as quick as someone like Simon Yates. His season hasn’t been great yet, but he has just finished a block of altitude training, so his current shape should be good. If Martínez can also get over the cat 1 climb with Sivakov, they’ll use the old 1-2 on the final rise to the line. Having two riders will give them a big advantage.

Simon Yates – we’ll have to wait and see what his current form is like. With the Giro just over two weeks away, he will be good, but he won’t be wanting to burn energy here that he’ll need in the third week of the Giro. On paper, he’s the strongest climber in the race, but that doesn’t mean he’ll win. Also in his favour is his sprint, he can shift when he wants to. Given the way he climbed in Tirreno, I think he’ll start as the favourite.

Aleksandr Vlasov – had a sensational 2020, he really stepped up to the elite level. The Russian is a brilliant climber, he also goes well on steep climbs, he’ll like the look of this stage. Astana don’t have the strongest team in the race, he won’t have any support in the finale of the race. We don’t get to see him sprint very often, but he’s got a good turn of speed.

Hugh Carthy – as I’ve already mentioned, he’ll love the cat 1 climb. He was already on the attack today; I expect to see him launching some bigger moves in this stage. He was riding very strong just over a week ago in the final stage of the Basque Country, he’ll be hoping for a good performance in this stage. The flat finish isn’t ideal for him, he’ll hope to do the damage before then.

Nairo Quintana – he’s on a different trajectory compared to everyone else at this race, his main goal is the Tour de France, not the Giro. This means he can potentially take a few more risks, but his current level might not be as good as the Giro guys. He’ll desperately be hoping to hit the level he was at just over a year ago, he was flying at the start of 2020. Like a few others, the finish isn’t great for him.

Pello Bilbao – had a good go today, but was caught 4km from home. He’s one of the few climbers who’ll actually like the look of this finish, as long as he can survive in the front group. Bilbao is a good climber, but he’s not as strong as most of the riders already mentioned. The fact that the big climb crests with over 20km to go is good news for him, this is a stage he should be challenging for the win.

Felix Großschartner – he’s in the same position as Bilbao. The Austrian is a good climber, but not a great one. He does pack a fine sprint, so it’s all about hanging tough on the big climb and hoping he can survive.

DSM – with Bardet and Hindley you would expect them to be challenging, but these guys are hard to predict.

Dan Martin – he’ll need to show better form than he has previously this year. The finish is good for him, but can he survive the big climb?

It all depends on who has the numbers after the big climb. I’m hoping we don’t see Ineos with multiple riders in the front group, that would be boring. Instead, I’ll take a win for Aleksandr Vlasov.