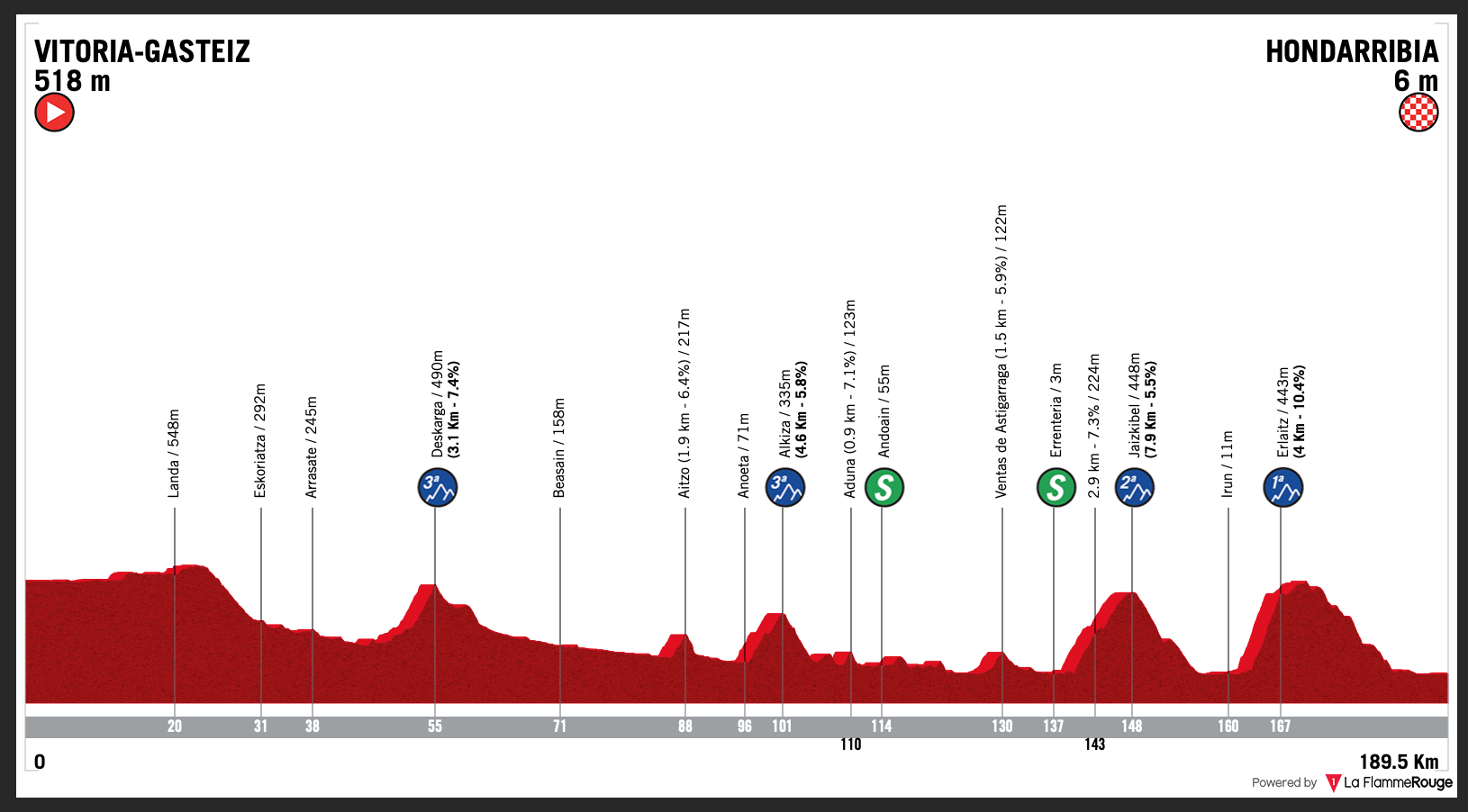 The organisers have decided to use the legendary Jaizkibel climb, quickly followed by the brutal Erlaitz. This combo is very difficult and even though the final climb crests with 22km to go, this could be a big day in the GC fight.

The Jaizkibel is a climb well known to cycling fans, it is 8.1km at 5.4%, so it isn’t the hardest, but it’s still tough enough to drop riders.

The Erlaitz climb was used in the 2019 edition of San Sebastian, it is a real brut of climb, 3.9km at 10.5%. If you want a comparison, the Civiglo climb used in Il Lombardia is 4km at 10%, so this one is harder. The crest comes with 22km to go, but the road continues to rise for another 3-4km before the riders start the descent. Do not underestimate this stretch of road, it is a pain after such a tough climb. The descent will be fast, but as the road surface is good it won’t create gaps.

It will be much milder than previous days, with temperatures due to reach 20 degrees. The wind is under 10km/h, but it will be a headwind or cross/headwind for most of the two climbs. The Erlaitz climb is well protected by the trees, the wind shouldn’t stop the attacks.

This is the first stage that gives the breakaway riders some hope. The gaps on GC are big, and the fact that the final climb crests with over 20km to go usually swings the advantage over to the attackers. The problem for them is the flat start, which is easy to control and ensure the break is small, but that depends on the attitude of the bunch. To win from the break you’ll need to be a good climber, but getting in the break will be tough for the climbers due to the flat start.

The final climb does crest with a long way to go, this normally means we’ll see groups getting back together before the finish. In turn, this can put riders off attacking and wasting energy that they’ll need later in the week. I hope we don’t see negative racing, the Erlaitz climb deserves to be attacked.

Jumbo-Visma are still in control of the race, but their team is starting to show a little weakness. The big plus for them is the form of Jonas Vingegaard, he finished 8th today and is 6th on GC. He will be needed to help protect Roglič after the final climb has been crested, there are still a number of riders who are threat to the Slovenian, he can’t chase them all.

How UAE approach the stage will be interesting. Pogačar looked brilliant today, he now sits just 20 seconds down on GC, but they also have Brandon McNulty who is only 30 seconds behind Roglič. This puts them in a strong position, they’ll look to try and use this to their advantage on the Erlaitz climb, and the run for home. This is why the presence of Vingegaard is vital.

I think we’ll see teams like UAE and Movistar make the pace hard on the Jaizkibel, then attack on Erlaitz and see what happens. Yes we have a big stage on Saturday, but this is a good opportunity to test Jumbo-Visma.

Primož Roglič – he looked great today, following all the moves he needed. In the end he lost 4 seconds to Pogačar, but he’ll be very happy with how the stage went. This one is a very dangerous day, especially the period from the top of the Erlaitz climb to the finishing line. Having a teammate will give him a big boost, but if he is alone then the others could work him over. The other option he’ll have is to attack, not many of the climbers can follow him on the flat. I hope to see an attacking Roglič in the finale of this stage.

Tadej Pogačar – just like his Slovenian pal, he was brilliant today. He will see this as a big chance to take more time back on Roglič and apply pressure to the Jumbo-Visma team. There’s not much in it, but he probably has the fastest sprint of the GC riders, he’ll be happy if we get a small sprint. Saying that, he’ll still be attacking on the climbs, he would love to drop Vingegaard, especially if McNulty makes the front group.

Adam Yates – wasn’t as good as I thought he would have been today. Tomorrow is another day, and a chance to go for a stage win. He won’t outsprint Roglič and Pogačar, so he needs to attack on the final climb. He is 39 seconds behind Roglič, so there’s no way he’ll simply be allowed to roll off the front, he’ll need to earn the win. This finish isn’t perfect for him.

Alejandro Valverde – can he outsprint Pogačar? I don’t think he can. Valverde’s fine run of form continued today, it’s great to see him back challenging for wins. This is a good stage for him, he should be able to follow the moves on the climb and he might just get a little freedom in the finale.

Brandon McNulty – his form this week has been very impressive, he provides UAE with a strong back-up option. With all eyes on Pogačar, he can escape as the bunch head for the finishing line, especially as he has a huge engine on the flat. His first world tour win is surely just around the corner.

David Gaudu – another who’ll hope to get some freedom if the main GC riders mark each other. He’s climbing well, packs a fast sprint, but isn’t great on the flat.

Deceuninck – Quick Step – they have two great options in Knox and Vansevenant. I was delighted to see Knox at the pointy end today, a little reminder to everyone just how good he is. If a slightly larger group approach the final 10km together, both he and Vansevenant will have a great chance to take the win. Knox should be used as an attacking option, with Vansevenant going for the sprint.

EF – another team with two options: Carthy and Higuita. It all depends on the size of the front group. Hugh should be attacking, with Sergio waiting for the sprint.

Astana – yet another team with the two-option approach: Fuglsang and Izagirre. If the front group contains 15 riders, they should both be there. It just depends what happens on the final climb and if the front group cooperate and push on.

Bora – hansgrohe – Guess what? That’s right, another team with two options. They have Schachmann and Buchmann, and are in the same position as DQT, EF and Astana.

I have a little feeling this is one for the break, Jumbo-Visma won’t be chasing. Astana have come to this race hunting stages and I’ll take a win for Alexey Lutsenko. Back in the GC fight, I don’t think we’ll see big gaps, the final climb is just a little too far from home.