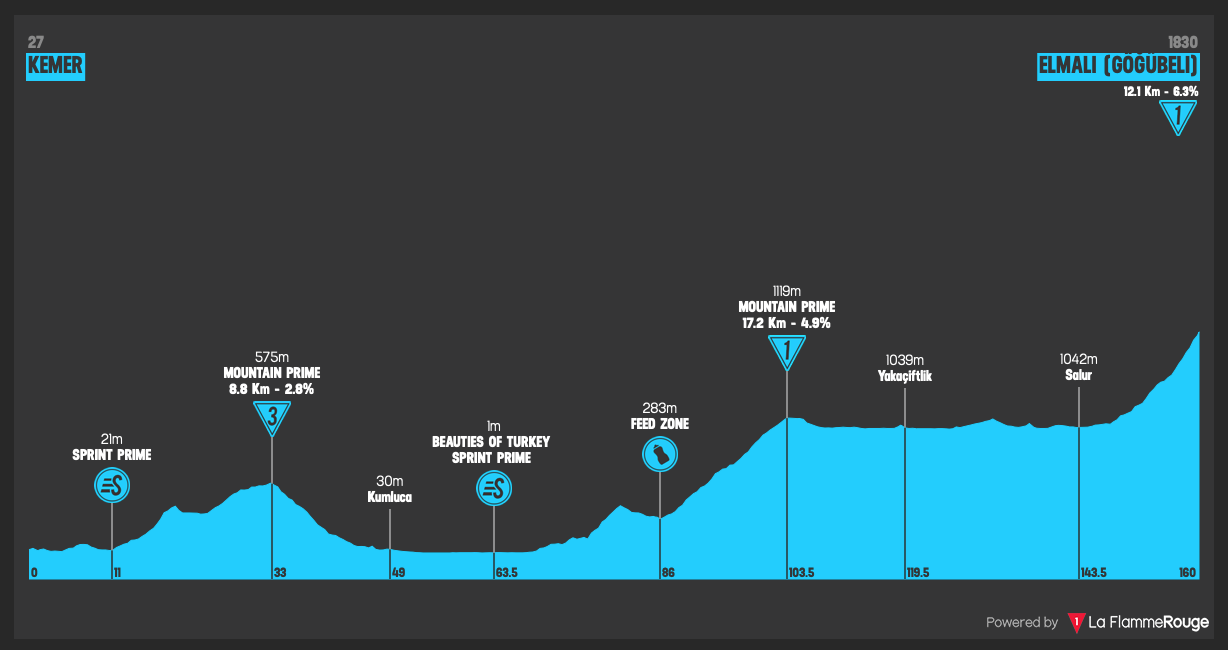 The race heads back to Elmali for the first time since 2016, a climb that used to be in the race every year. The stage is by far the hardest in this year’s edition, after four days for the sprinters the GC men will come out to play.

Warm and sunny. The wind isn’t very strong, and it’ll mainly be a crosswind on the final climb.

The Avlan climb is the first of the two cat 1 climbs in the stage, it is 17.5km at 4.7%. After the climb there isn’t a descent, the bunch roll along a flat road until the final climb.

The Elmali climb is 7.6km at 7.4%, but it’s actually a little harder than the numbers suggest. The last 2km of the climb is incredibly difficult, with many sections over 10%, but it’s also very inconsistent. The riders will find it hard to settle into a rhythm.

We only have three world tour teams at the race, but only one of them have a realistic challenger for the title. I wonder if we’ll see DQT and ISUN looking to send some of their big rouleurs into the break, just for a little fun. If the responsibility for chasing the break falls on the shoulders of a smaller team we could see a surprise result, Astana will need to carefully manage the start of the stage. Given the tight GC situation, the break shouldn’t really stand a chance, but you just never know.

Who has the climbers to set pace on the final climb? Astana will likely have to shoulder much of the responsibility, but they don’t look overly strong to me. In Kudus they have the favourite to win the race, they will hope that Contreras, Stalnov and Romo can support him deep into the climb. The smaller teams will be happy to let Astana set pace, they don’t have the riders to do so. Once the attacks start to fly we’ll see who has the strongest legs, it’s one of those climbs where the best will win, it doesn’t really matter about team strength.

Merhawi Kudus – on paper he should win this stage with ease, but races aren’t decided on paper. Kudus was 3rd in this race back in 2019, he has the climbing ability required to cope with the final climb. Astana should be able to control the race, putting Kudus into the best position possible, we’ll then see if he can finish off the job. He doesn’t get many chances to ride for himself, he’ll be motivated to seize this opportunity.

Quentin Pacher – I picked him as the overall winner in my GC preview, but the more I think about it, the more I think he’ll struggle a bit on the climb. The Frenchman is in great form, but he performs better on punchy climbs, I’m not sure he’ll cope with the long climbs in this stage. He was going well in Paris-Nice; he was 8ththe day Roglič soloed away from the bunch, but then he was 27th on the mountaintop finish. This is my concern.

Seb Berwick – considering he’s spent the majority of the flat stages on the front of the peloton, he’ll start this stage with less in the tank compared to his rivals. Maybe he decided that his legs needed some work in them ahead of this stage or possibly he’s not in the form to challenge, we’ll see on the road.

Jay Vine – has no form to speak of, which makes it hard to predict how he’ll go. This is the guy who won a contract with Alpecin-Fenix by winning their Zwift competition. He is a very good climber, and would love to perform well in this stage to show he’s here on merit.

Kevin Rivera – the purist of pure climbers! The tiny Costa Rican is exactly the type of climber who’ll love this climb. He has previous in terms of winning mountain stages in smaller races, he took the win on Genting Highlands in the 2020 edition of Langkawi, and back in 2019 he won the Sibiu Cycling Tour and a mountaintop finish in Tour of China II. Rivera is a hugely talented climber but lost his way last year with Androni. He’s now with Bardiani and this has to be a huge goal for him, it’s a stage he really should be winning.

Mathias Le Turnier – the DELKO rider has a fairly good climbing pedigree, back in 2016 he was 2nd in Ronde de l’Isard. The problem is that he’s struggled to convert his promise into top results, but he’ll hope to have a good day and challenge for the top 5.

Jhojan García – another of the tiny climbers who’ll be hoping to shine. The Colombian rides for Caja-Rural, a team who normally go well in this race. 8th in the 2019 Tour de l’Avenir tells you everything you need to know about his climbing ability, but his spell with the Spanish team hasn’t been successful. He needs to take this chance.

Nikolay Cherkasov – I remember taking notice of the Russian back in the August of 2019, particularly in the Italian races. Since that point he’s been a massive disappointment, he’s needs to halt his slide into mediocrity.

Gavin Mannion – the American tasted success in 2019, winning two stages in Tour de Savoie Mont Blanc, he can climb! He has the potential to win this race and seeing as he raced in Catalunya he has the racing in the legs, something that many of the riders here don’t have.

Anthon Charmig – the young Dane rides for Uno-X, he’s a talented climber, but if he wins this stage I’ll be very surprised.

Anatoliy Budyak – the Ukrainian has form, just two weeks ago he won the Tour of Mevlana. Okay, it’s only a 2.2 race but it shows his legs are currently good. He rides for a Turkish team and goes very well in home races, he’s exactly the type of rider who can surprise the bigger teams. Remember, we’re used to seeing some surprising results in this race.

Jesse Ewart – the Aussie has recently switched to ride for Ireland, he’ll see this as big chance to show everyone just how talented he is. Before this race he didn’t have much racing in the legs, which is a real issue for a lot of the Asian Tour riders, hopefully the opening four stages have warmed him up a bit. At the start of the year he was 5th in the Aussie road race, finishing in the front group of riders. This is his fourth-year riding for Team Sapura, in that time he’s picked up some impressive results but hasn’t had the luck required to get a deal for a bigger team. This is a great opportunity to put himself in the shop window, I really hope he goes well.

Danilo Celano – rides for the same team as Ewart, and he has had chances at a higher level, but he’s blown them. The Italian is such a hard rider to work out, at times he climbs like a dream, at other points he’d struggle to beat me. In 2020 he won Langkawi, if he shows that form he could surprise the big names. He’ll either by 1stor 100th!

As so many of the riders arrive with little racing in the legs it’s very hard to predict. I’ll listen to my heart and go for Kevin Rivera.