Another stage that is used a lot in this race. 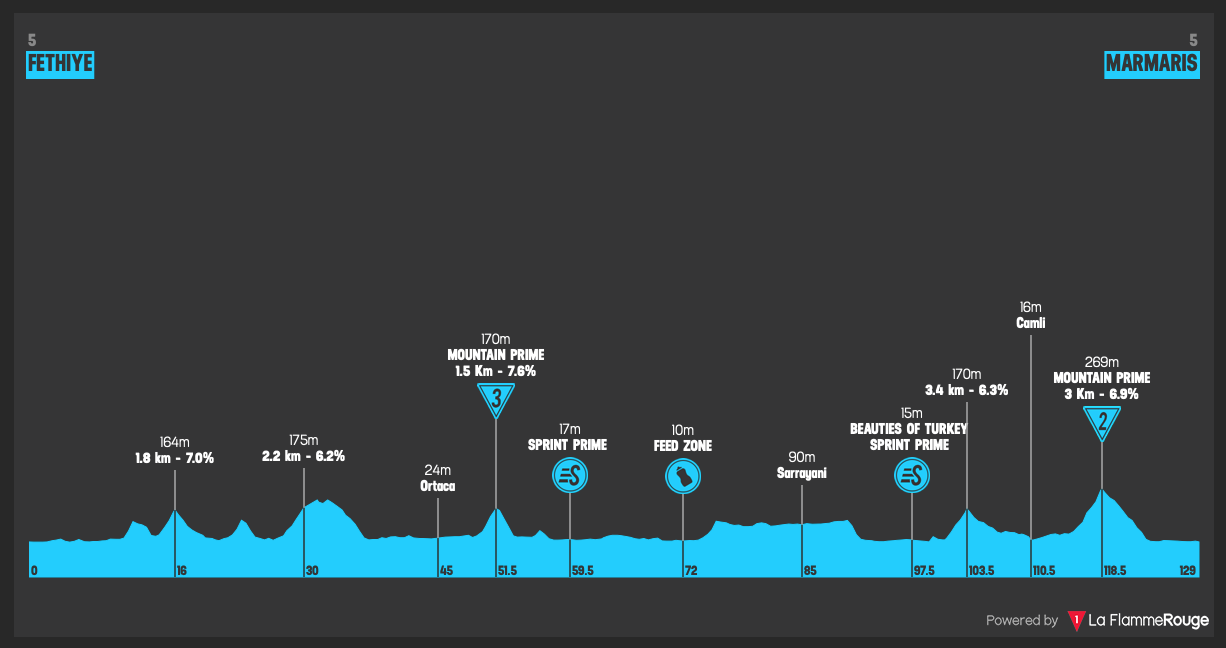 Just 129km in length, this is a short day in the saddle for the bunch. The route is relatively flat, but the climb with 14km to go will make sure we get an exciting finale.

3.6km at 5.6% is a tough little climb, this has been used many times in the race. It takes place on a wide highway, which makes it a little easier than the figures suggest. The crest comes with 10.4km to go, 4km of that is a fast downhill before a flat run for home. The finale is very easy, just one corner with 2km to go and another sprint on cobbles.

I’ve always been amazed that this stage ends in a sprint, in my head it really shouldn’t. Putting a climb so close to the end usually means the puncheurs would have the advantage, but the sprinters can usually hang tough on the hill, and use the descent to get back to the head of the race.

Today’s stage leaves the GC delicately poised. Díaz leads the way, but Jay Vine is just 4 seconds behind, with Eduardo Sepúlveda another 2 seconds back. This means that Díaz cannot relax, and I would expect some GC attacks on the climb. This is a chance to test DELKO and see if they can defend the title, this race isn’t over.

Then we have Deceuninck – Quick Step, who aren’t involved in the GC fight, but will want a sprint. The Belgians have a number of options, it really does depend on how hard the climb is, and how many riders are in the bunch.

Jasper Philipsen – still without a win, but he’s going well. Alpecin-Fenix are now down to just four riders, and one of them is Jay Vine who sits 2nd on GC. That means Philipsen might have one rider to help him in the closing stages, which isn’t ideal. The good news is the climb, the Belgian fast men should easily cope with this hill. As many sprinters will likely be dropped, the closing kilometres should be easier to navigate without help, just as well really. The team have finished 2nd in four consecutive stages, can they eventually get a win?

DQT – if Cav survives the climb then he’ll sprint, if he doesn’t then it’s a day for Shane Archbold. The Kiwi has been climbing very well recently, he was close to winning a stage in Coppi e Bartali, but it just evaded him. He has the speed to win, hopefully he gets to have a crack at it.

Davide Cimolai – I doubt Greipel will survive the climb; this should be a day for the Italian. I’m not sure how he’ll get on, the last time he sprinted was way back at the Giro.

Stanisław Aniołkowski – the young Pole continues to impress. This stage is one he must be targeting; he copes well with hills and will hope that some of the faster sprinters get dropped. Taking a win would be huge for him and his team.

Luca Mozzato – he’s struggled a bit in the bunch sprints, but he’ll be happier in this one with less sprinters around. He will hope the pace is high on the climb, if we get a reduced sprint he has the speed to take his first professional win.

Late Attack – if the climb is raced hard, and the bunch is reduced, there is a chance for a late attack to stick.

We’ll get attacks on the climb, but it should come back together for a sprint. Despite a lack of support, I’ll take a win for Jasper Philipsen.