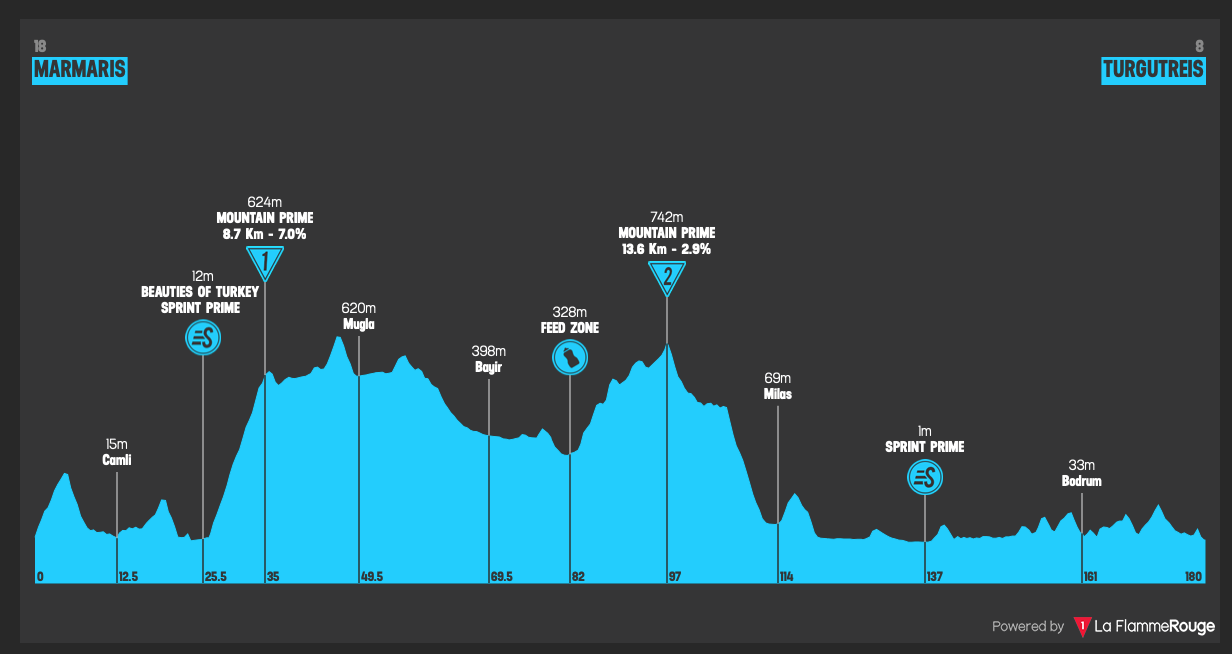 I’ve said this before in this race, the attitude of the world tour teams will determine the type of stage we get. It could be a sprint, it could be a breakaway, it’s up to Deceuninck – Quick Step, Astana and ISUN to decide.

This is the descent the bunch came down at the end of today’s stage. The bunch climb this straight from the gun, which is perfect for those hoping to form a strong break.

After just 27km of racing comes the big climb of the day. The cat 1 climb is 9km at 6.7%, it’s a tough one. After this is done, that’s most of the climbing out of the way and we still have 145km to go. Will the big teams control for a sprint? Will we see a strong break escape never to be seen again?

The sprinters have enjoyed many opportunities in this race, I think this one isn’t for them. Don’t get me wrong, it is possible for DQT and ISUN to make this a sprint stage, but that’s not going to be easy. As long as the break features riders from these teams it will stay away. The slight issue for Quick Step is that their team is full of quick men, getting over the cat 1 climb in the break won’t be easy for them.

A little on the cloudy side, but still warm. As the riders head towards the finishing town the wind will reach around 35km/h and it comes from the south-east. This is plenty strong to split the race, but much of the route is well protected from the elements, which is quite surprising considering they’re near the coast. As most of the whole stage is in a good direction for splits, riders will have to be very careful throughout the day.

The final 25km contains quite a few little lumps, it’s not that easy. The longest of the climbs starts with 10km to go.

2.7km at 3.8% isn’t hard, but it provides an opportunity for some riders to attack.

With just 2km remaining we have 500m at 5.8%. The final kilometre is downhill, if someone gets a gap at the top of this climb they can stay away for the win.

The climbs at the start of the stage makes it hard for the big teams to manage the break, it could be a chaotic start. This is the last chance for the GC riders to try and make a difference, I expect to see fireworks on the cat 1 climb and teams to try and put pressure on our race leader. It’s unlikely to work, but it should ensure a strong break escapes and there is every chance it stays away until the end.

Astana – they are the only world tour team with multiple climbers, this is a good stage for them. They have Kudus, Romo and Contreras high on GC, I expect the team to set a fierce pace on the climb to see if DELKO show any weakness, but I doubt they will. What could happen is that Astana manage to place a few riders in a strong break, and they fight out the stage win.

Pierre Rolland – didn’t manage to fight for the stage win on Thursday, but this type of breakaway stage is great for him. Can he roll back the years?

DQT – can any of them survive the cat 1 climb with the break? If not, will they be able to chase down the move? The answer to both of these questions could well be no.

ISUN – they are almost in the same position as DQT, but they have Seb Berwick, a rider who can climb with the best. Can he take his first pro win?

Giovanni Visconti – the crafty Italian is exactly the type of rider who can win this type of stage. He might be 38, but he’s still quality.

Uno-X – both Charmig and Johannessen were brilliant on Thursday, I think we’d all be happy if Charmig could win this stage. The Norwegians have really punched above their weight this season, will they be able to take a deserved win?

We’ll see GC attacks at the start of the stage, this is too good an opportunity to pass up for Astana. This means the front group at the top of the cat 1 climb will be relatively small, but what happens after this is unknown. DELKO are fairly strong, they should enough men to control this group, but they won’t be interested in pushing on. 145km is a long way to go in the stage, we could see an interesting chase between the front group and the main peloton featuring the sprinters.

Saying that, I still think the break will win. I’ll take a stage win for Giovanni Visconti, he’s a cunning old fox.