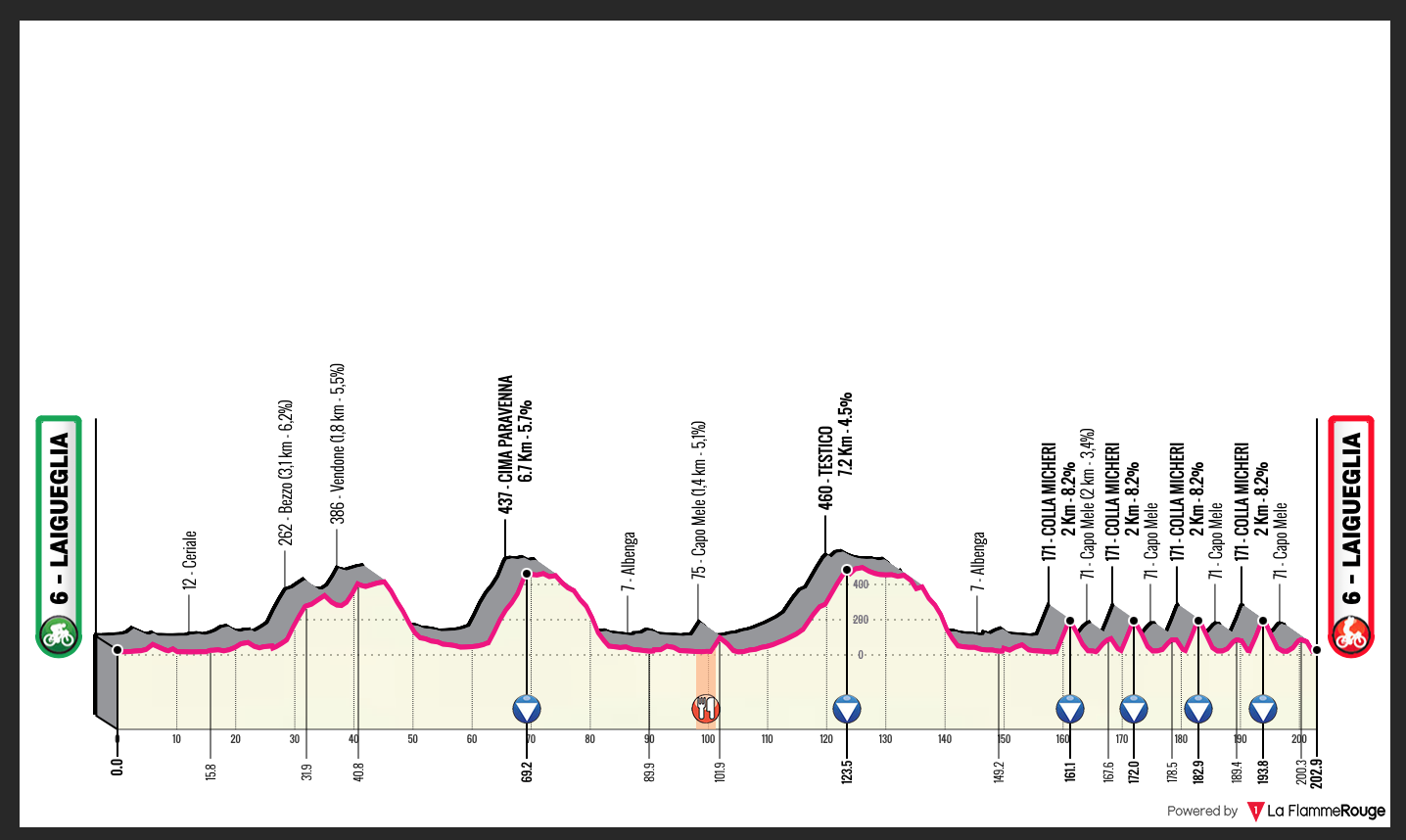 This race is all about the lap circuit.

This is the climb which the riders have to tackle on four occasions. It is 2km at 7.8%, and it’s on a narrow road with quite a few switchbacks. The climb is harder than the figures suggest.

The descent is fast and technical, differences can be made on the downhill section.

A beautiful day on the Mediterranean coast.

How hard can teams make the race? We have three or four very strong teams at this race, if they want to, the climb can be made very difficult. 2km at 7.8% isn’t too bad, but the climb comes around every 9km, which means very little recovery time. A team like Ineos could certainly blow the race to pieces on the second or third ascent.

We’ll also have riders looking to attack on the descent, there is no guarantee the winning move goes on the climb. Normally in a race like this we see the speed increasing every time we go up the hill, but this could be full gas for the final 50km.

This is the start of the climb; you’ll understand that teams will be very keen on getting to the front of the peloton for this. The narrow road means that if you start too far back, you’ll struggle to get to the front. Each lap should see a sprint lead out for the beginning of the climb; this is going to be very tasty.

In all likelihood, Ineos will attempt to boss the race. In Bernal and Kwiatkowski they have two of the strongest riders in the peloton and they’ll be keen on making the race too hard for Ballerini. Teams with strong climbers will be happy with this, but the big worry for all the teams is if one squad manages to have multiple riders in contention towards the end of the race. This will give a massive tactical advantage, particularly if the other teams are down to just one or two riders.

For this race I’m joined by James Knox of Deceuninck – Quick Step.

For this race I’ll be taking over at Bahrain.

Right lads gather round. Landisimo, this has been a dream of mine for many a year. At last two of the greatest cycling minds are together. I want you to stretch your legs the first two times up the climb. You know what I’m talking about, get on the drops and give it everything you’ve got. That will blow the bunch to pieces and set up Bilbao Baggins and Maddie Mohorič. Third time up the climb don’t attack; Maddie I want you to move on the descent. Do what you do best, if you get a small gap it will soon turn into a big one. Baggins, sit tight, wait for the other teams to work and just follow the wheels. If it comes back together, you have a great chance of winning the sprint. Vamos!

QTS – in Bagioli and Ballerini they have two winners from the weekend. Ballerini is in brilliant form, he’s the man the other teams will be worried about. He can climb well, which means the others need to make the climbs very hard in order to put him into difficulty. Bagioli looks better suited to the climb, and he also packs a fine sprint. Not only that but they have Serry, Devenyns and Knox as strong supporting riders, not to mention Vansevenant as a bit of a wildcard. Same as usual, the Belgians are very strong and will expect to have a big say in the outcome of the race.

Ineos – I’m really excited to see how Bernal goes here. I was pleasantly surprised by his performance on Chalet Reynard, he’ll be even better here. I would expect to see him attacking on the climbs, looking to see if he can put the others under pressure. That will allow Kwiatkowski to follow wheels and hopefully save energy. Kwiato had a strong start to the season in Bessèges, and this is a race that really suits his characteristics. Not only that, but the team have Moscon and Dunbar as potential options too. Ineos look ominously strong.

Trek Segafredo – Ciccone, Mollema, Brambilla and Nibali! Now, that’s one hell of a team and Trek have already started the season very well. Both Mollema and Ciccone impressed in Provence and Haut Var, with Mollema taking a stage win, but it was Brambilla who took home the Haut Var title. It’s been a while since we’ve seen the Italian at the top of his game, it was great to see him winning such a tough race and reminding us all of his talent. Throw Nibali into the mix and you can see how much of an impact the squad will have in this race. Ciccone is the defending champion and looks like the best option, but if the winning move goes early watch out for Brambilla.

Bahrain – another squad who arrive with strong options to play. They’ll look towards Bilbao, Landa and Mohorič as their protected riders, which gives them lots of attacking punch. The descent is wonderful for Mohorič, and he’s spoken about wanting to start the season with a bang. This style of one day race doesn’t really suit Landa, especially the rush to be at the front for the beginning of the climb, lap after lap. I just wonder if Mohorič will have the confidence to wait until the final lap and go toe to toe with the climbers, or will he move before then?

FDJ – the French squad arrive with Pinot and Madouas as their options. They might not have the depth of some squads, but both Pinot and Madouas should be challenging in this race. Pinot has started the season quite slowly, he experienced a lot of pain in his back over the winter, but 8th in the Ardèche Classic was a very positive sign about his current form. Madouas is one of the young stars of French cycling, they are very excited about him, I am too. I see his future in one day races, I think he can excel in races like Amstel, Liège and maybe even Flanders. He started the season off in Haut Var, but after making the race winning move in stage 3, he didn’t have the legs to finish it off. He’ll be hoping for better legs in this race, as he has a real chance of winning.

AG2R – they have two strong options in Champoussin and Vendrame. I watched both French races at the weekend, and Champoussin was in fine form, finishing 2nd in Ardèche. Vendrame was over in the UAE Tour, not a race that suited him, he was there getting some racing in his legs. He was 4th here last year; it really should be a race that he does well in. He can climb very well, but I have my doubts due to the extremely high level of climbers at the race. It looks like Champoussin will be their main man.

Despite the route maybe not looking perfect for him, I think Egan Bernal will blow them all away on the climb and take the win.