The race begins with a sprint stage. 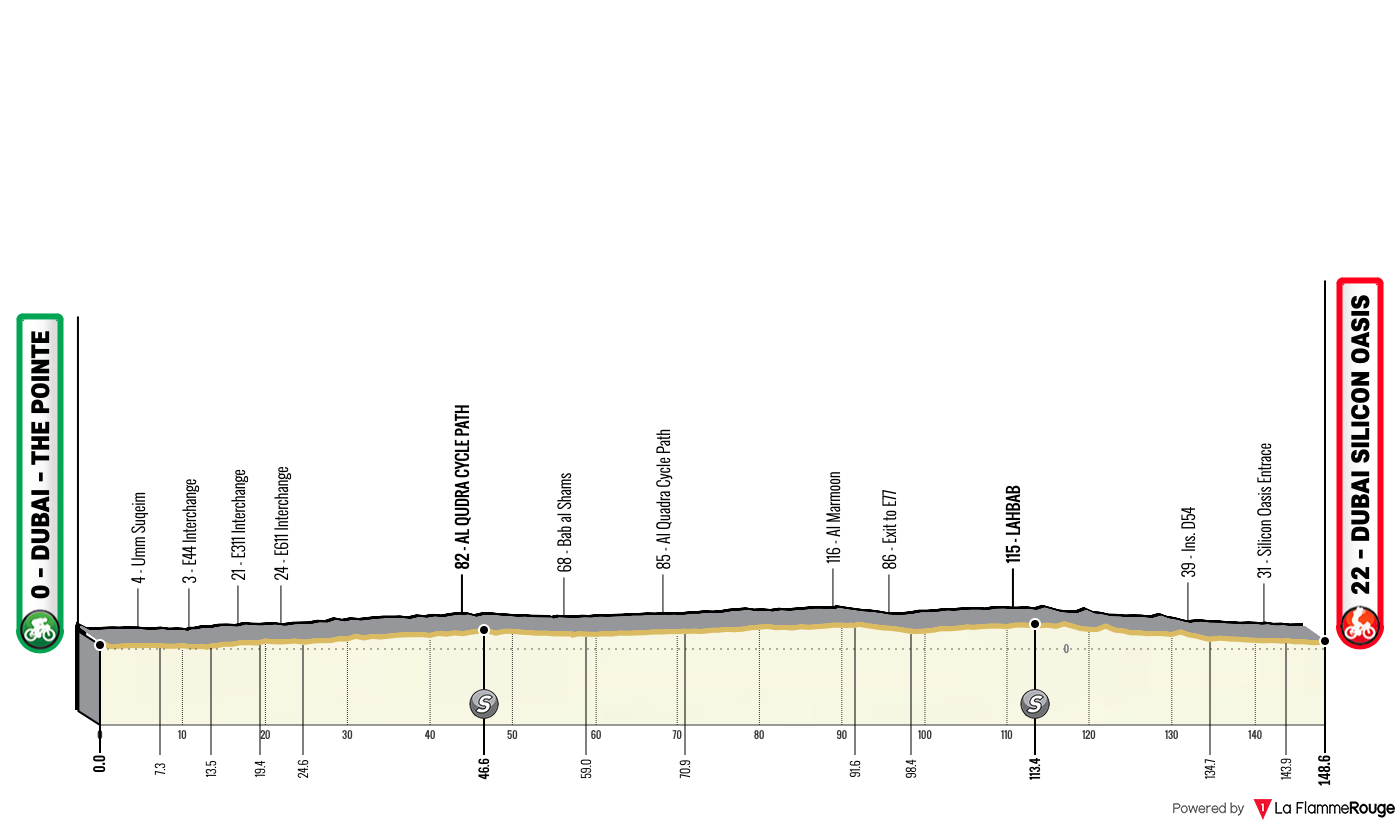 We have a plan flat route, but it does go through the desert, which will worry a few. Nothing much to say!

Some of the riders will be happy to hear that there isn’t much wind, this should be an easy day in the saddle.

The final 5km is punctuated with a number of roundabouts, the last one comes with just 750m to go. These will be used to help slim down the bunch, as the rest of the time they are on massively wide roads. If you are in control for the final roundabout, you’ll have a good chance of winning, especially as riders will need to come around on the longer side of the road as the road curves to the right.

QuickStep – Steels, Archbold, Mørkøv, Bennett. That is a fine looking sprint train. QuickStep are clever when it comes to looking after their sprinters, they have kept the final three together since the start of the year. They have the experience, they have the speed, they’ll want to start with a win.

Jumbo Visma – Martin, Van Emden, Pfingsten, Roosen, Groenewegen. The Dutch squad arrive with a long train to support their superstar sprinter. Groenewegen started the season well, winning two out of three sprints in Valencia, even though his sprint train was misfiring. Timo Roosen comes back into the unit, after finding himself being pushed out by Van Aert and Teunissen. Remember that Roosen is a brilliant final man, he worked very well with Dylan in 2018. They will go head to head with QuickStep, in a battle to control the final kilometres, which will make for interesting viewing.

UAE – Bystrom, Richeze, Gaviria. The Colombian started the season in fine form taking three wins in San Juan. This is the UAE Tour, Gaviria rides for UAE, you do the math! They want to win as many stages as possible. Last year he coped with the pressure, taking the 2nd stage with a hugely impressive sprint. He doesn’t have a long train, but he has Richeze, a rider worth his weight in gold.

Bora – Schwarzmann, Selig, Ackermann. Not a long train, but Selig and Ackermann work very well together. After a sluggish start to the year, the German got his first win in Almeria. 2019 was another good year for him and he’ll be hoping for more of the same in 2020. With so many trains fighting for superiority, I wonder how Bora will approach the final 5km.

Lotto Soudal – Van Der Sande, De Buyst, Ewan. After a brilliant 2019, which included three stage wins in the Tour de France, Caleb started 2020 taking two wins in the TDU. It’s interesting that Kluge is not here, instead they turn to Van Der Sande and De Buyst, who makes his season debut. They don’t have the best sprint train, but Ewan is a master of surfing wheels and looking after himself.

Anyone Else – no one else can win, the guys already mentioned are just too damn fast.

QuickStep to boss the closing stages and Sam Bennett to take the win.