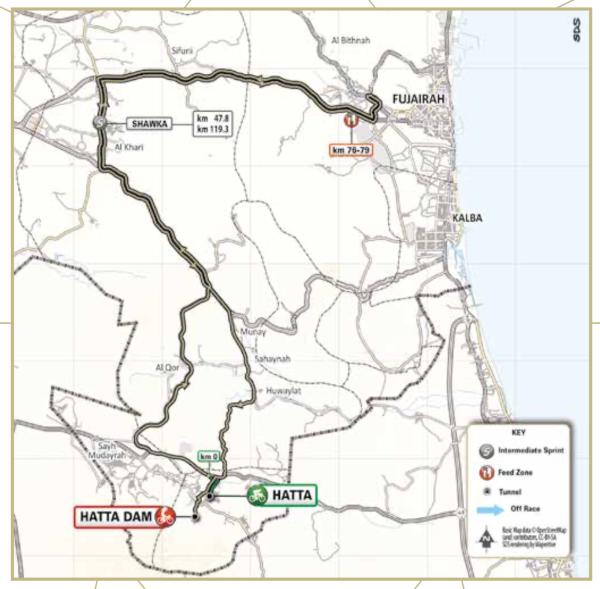 Back to Hatta Dam. 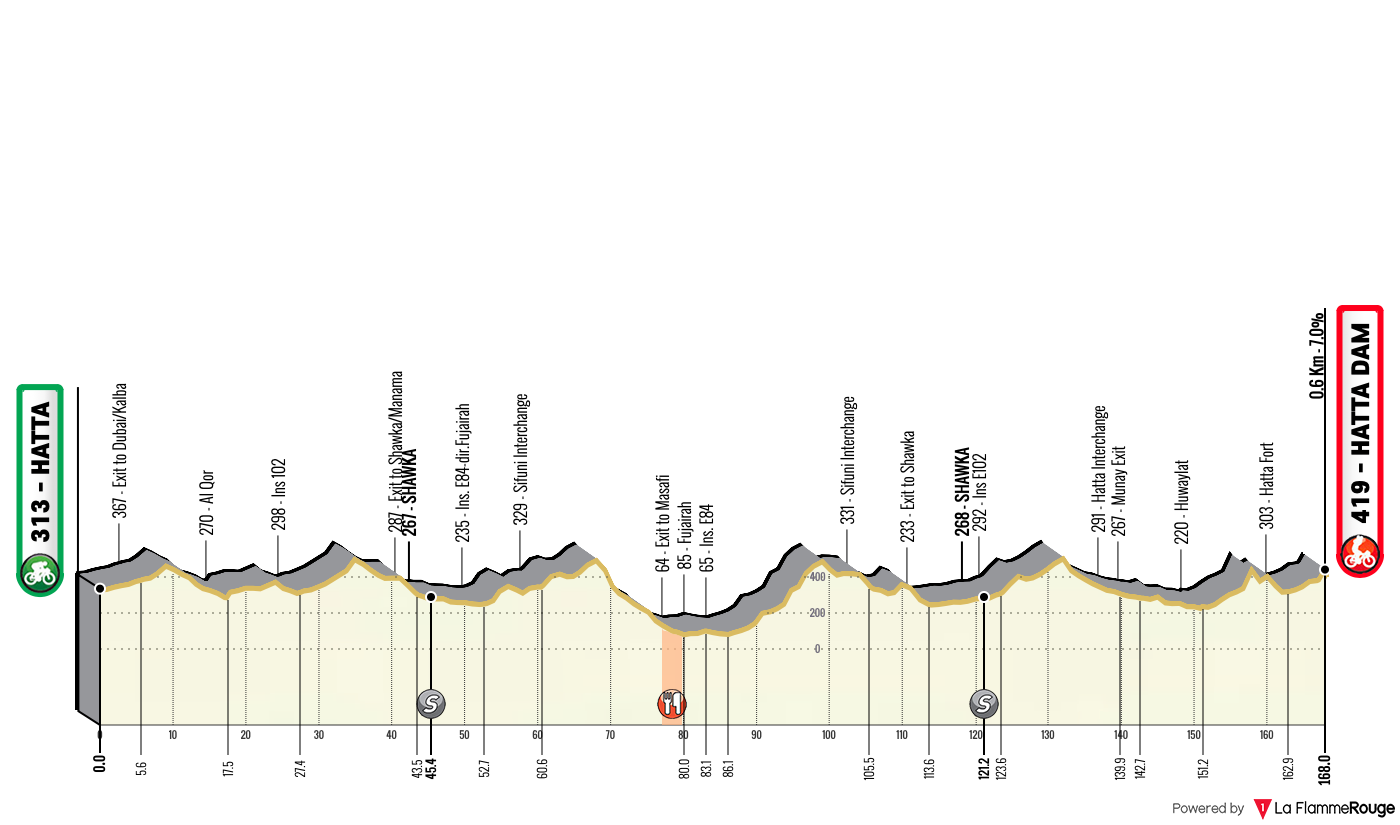 A lumpy little stage, one that is quite exciting for the fans, something you don’t often say about the UAE Tour! As we all know, it finishes on a brutal ramp that favours those with power, previous winners of this stage are Caleb Ewan, Sonny Colbrelli, JJ Lobato and John Degenkolb.

This stage was once cancelled due to the wind conditions, but there is no need for anyone to worry this year as the wind isn’t going to be very strong. 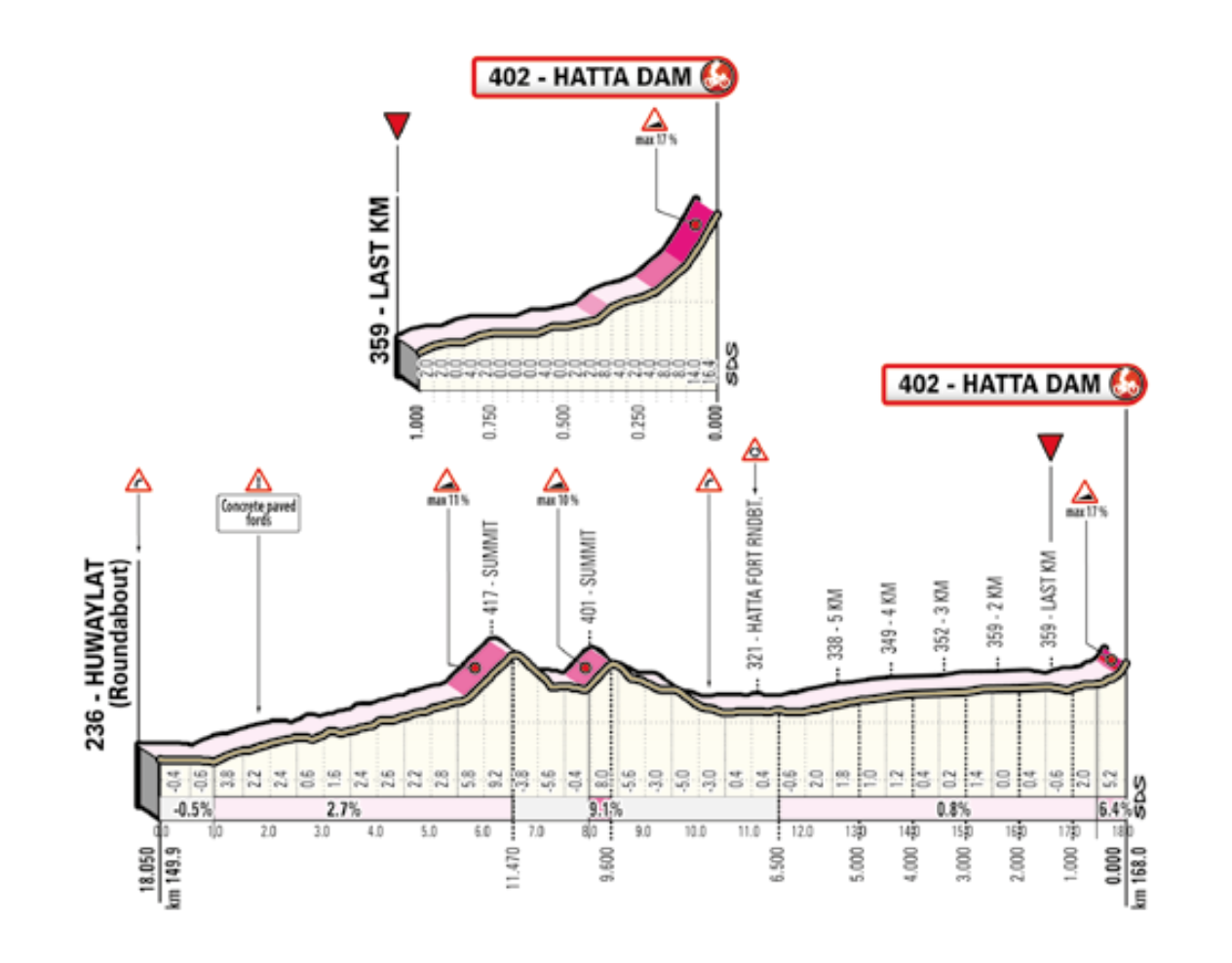 The final 20km has some complications, especially for the fast men that don’t climb very well. The two kickers will see some riders dropped, and it also encourages some long-range attacks. These moves are usually controlled by the peloton as the short stage ensures there are plenty of domestiques around to set up a sprint finish.

200m at 16.7%, with a maximum of 26.2%, this is a very demanding finish. As you can see from the list of previous winners, this stage has always gone to a sprinter. 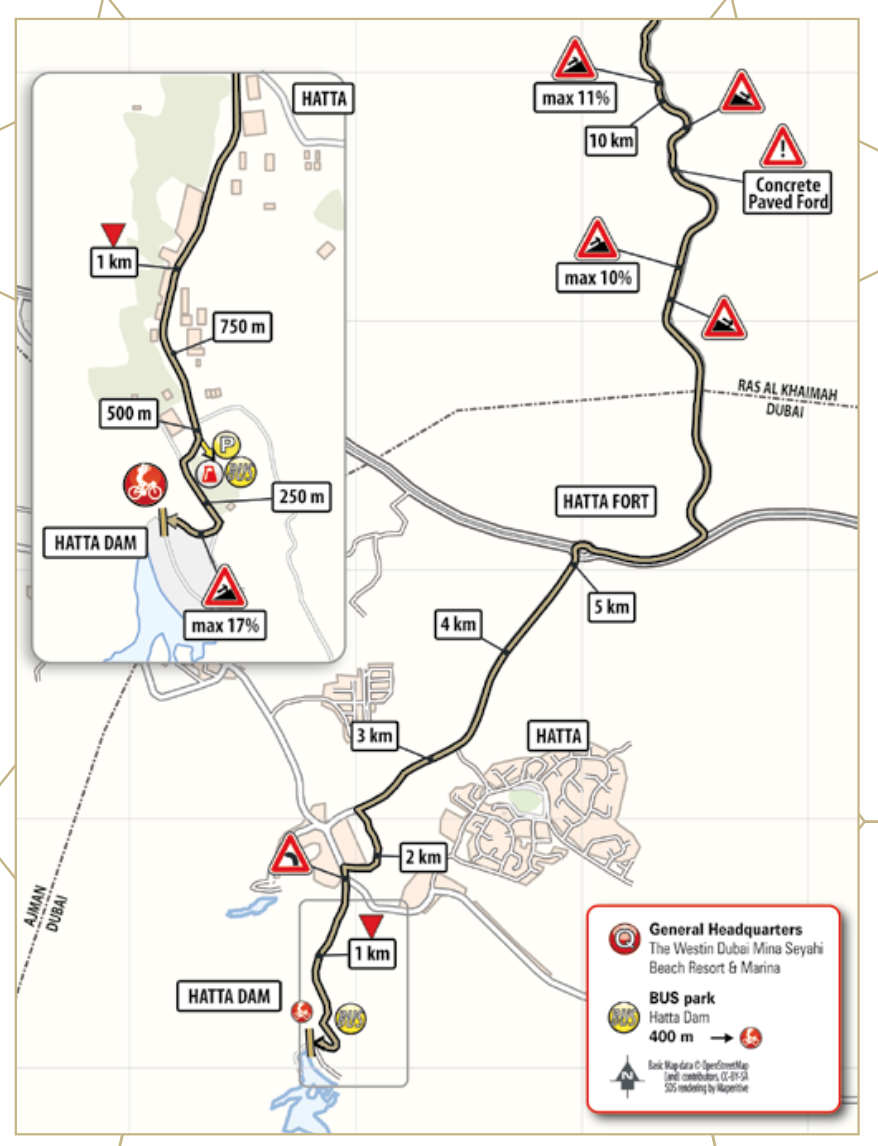 Just like in any normal finish, positioning is hugely important. The entrance to the climb is very narrow, and you have to be in the first 5 positions as the road turns right. This usually means a full-on sprint lead out in the final 5km. Also getting into the mix are the GC riders, as they know that gaps can appear at the end. The mix of sprinters and GC teams means a hugely chaotic finale and one where we can see some crashes.

Caleb Ewan – won here last year, in fact, he made it look rather easy. That performance means he’ll start as the favourite, but it certainly won’t be easy. Lotto Soudal don’t have a particularly long train here, they could well struggle to put Ewan into a good position for the final kilometre. If he does start the hill in a good spot, he’ll be very hard to beat. The reason is he can deliver a massive amount of power and he’s very small, which means he goes faster up a hill than his heavier rivals.

Pascal Ackermann – this is his first attempt at the Hatta Dam, so it’s hard to know what to expect. This is a finish that doesn’t suit all sprinters, but I think he should do well. After winning the opening stage, he’ll be full of confidence and I would expect Rudi Selig to help get him into a prime position for the finale.

Fernando Gaviria – he says this finish doesn’t really suit him; I think I agree.

Sam Bennett – was dropped last year and didn’t contest the finish, but will that happen again? Bennett can climb well, but possibly not at this time of the year. If he makes it to the finish, he certainly has the power required to challenge for the win.

Luca Mezgec – this is a stage that suits his characteristics well. The Slovenian fast man lost some weight last year, this allowed him to be much more competitive in tough finishes. An example of this was a win in a tough uphill sprint in the Tour of Poland. He was well positioned by his teammates today, a repeat of that in this stage and he should be challenging for the win.

Dylan Groenewegen – too hard for him, he’s likely to be dropped in the closing 20km.

Timo Roosen – 3rd here in 2018, the classics man has the power required to challenge for the podium. He didn’t do very well today; the team will expect more from him in this stage.

Alexey Lutsenko – I’ve said that this stage is one for the sprinters, but I’ll throw Lutsenko’s name into the hat. He has a good turn of speed and should be able to get close to the winner, but it will take a superhuman effort to thwart the fast men.

The little Aussie starts as the favourite, but I am curious to see what Pascal Ackermann can do. When the dust settles, I think Caleb Ewan will take consecutive wins on Hatta Dam.