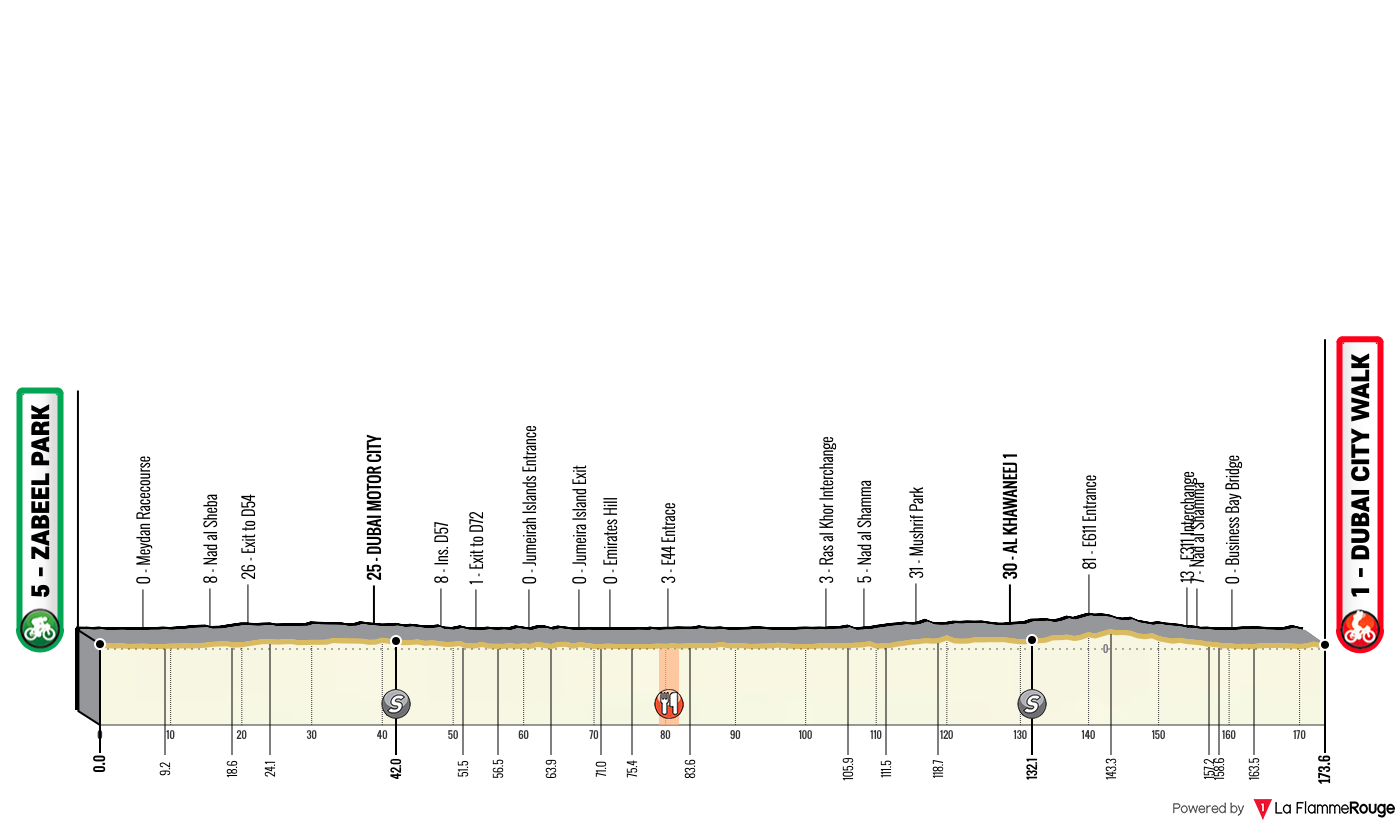 A stage that stays in the city and doesn’t venture out into the desert. Get set a boring day, apart from the final 5km.

Just as dull as the rest of the stage! We have a sweeping bend with 3km to go, then a big corner with 500m to go. The battle is on for this corner, the winner will be in the first 5 at this point.

Much more wind than in previous days, but as the riders stay in the city, it’s unlikely we’ll see any splits. We do have some exposed sections, and some teams will try to split the bunch, but it will be hard to do so and keep the attack going.

Pascal Ackermann – his win in the opening stage was very impressive. He didn’t have a big train, but he does have Rudi Selig. These guys are good friends, you can see just how much faith Ackermann has in his lead out man. Ackermann also possesses the ability to stay near the front of the bunch and pick the right wheels to follow, this is a crucial commodity in the sprint world. This sprint is likely to be another messy affair, something the German will like.

Caleb Ewan – he was in the mix on the opening day, and delivered a big win on Hatta Dam, thanks to an awesome lead out by Jasper De Buyst. Lotto-Soudal don’t have a long sprint train at the race, but they do have Van Der Sande and De Buyst. They will try to stay near the head of the peloton and hopefully deliver Ewan into a good position. Winning a second stage this week would be very impressive.

Sam Bennett – QuickStep nailed the majority of the lead out in the opening stage, with Steels and Archbold doing a great job. Unfortunately for the team, Mørkøv made a very rare mistake, hesitating at the vital point and the chance was gone. This team rarely make the same mistake twice, I think we’ll see them back to their best in this stage. They have a brilliant unit in front of Sam Bennett, they are the best in the race. This should ensure their fast man is put into a perfect position for the final corner, can he finish it off?

Dylan Groenewegen – lost position at a crucial point on Sunday, but he did finish with some amount of speed. This is not his top lead out train, far from it. That doesn’t mean he can’t win a stage at this race, as the train that’s actually here is still better than most. He has started the season in fine form, his top speed is looking very impressive. If Jumbo-Visma get him anywhere near the front, he’ll be a hard man to beat.

Fernando Gaviria – as his train isn’t very long, he was left struggling for position in the opening stage. He did look to be carrying a fair amount of speed, but a block by Mørkøv meant there was nowhere for him to go. The Colombian can win this stage, but he’ll need some luck in the closing stages.

Get ready for another messy sprint, the winner will have good legs and a lot of luck. After they just about got it right on Sunday, I’ll again go for Sam Bennett, his lead out train is too good.