Time for our usual trip up Jebel Hafeet. 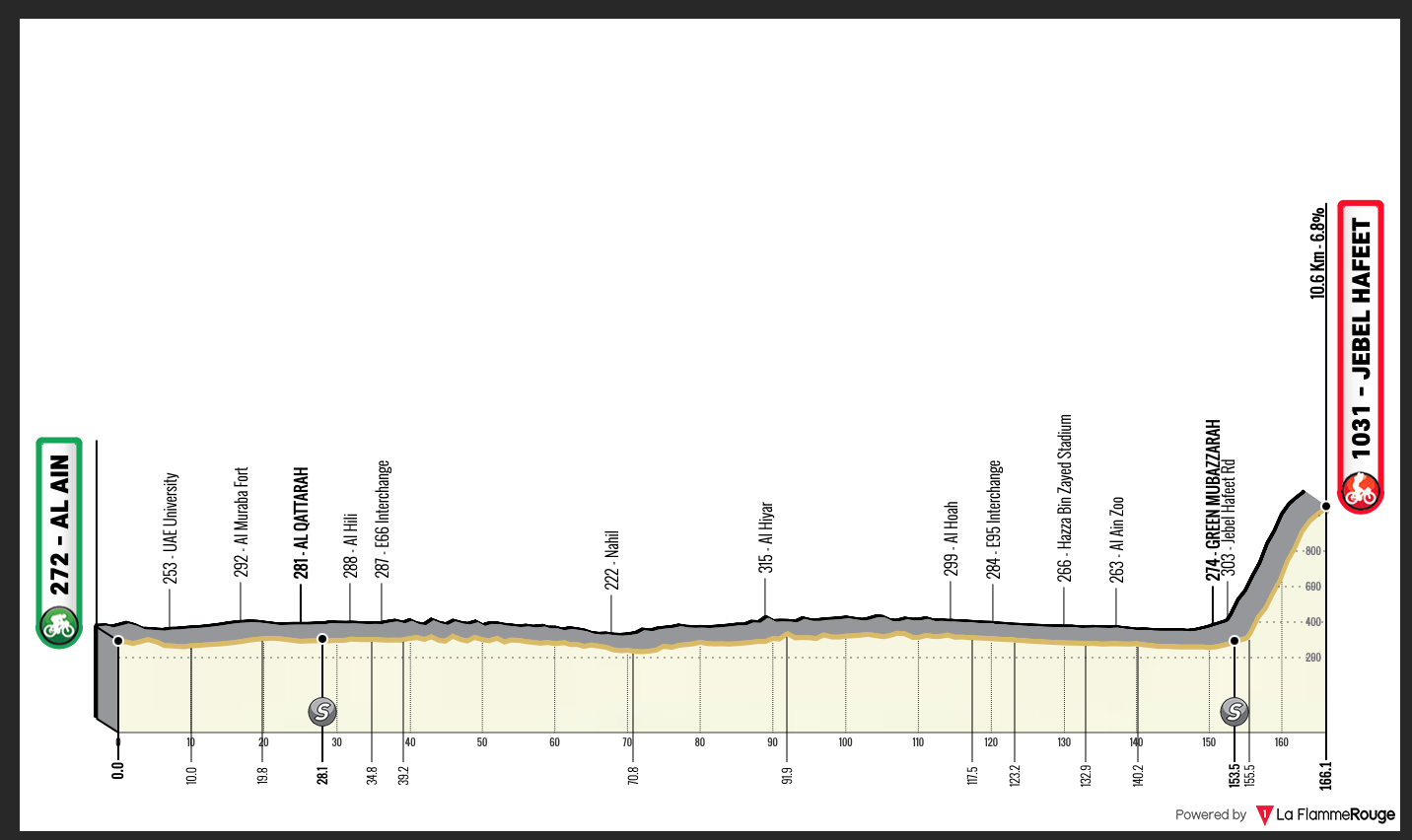 After the crosswinds on Sunday, you can bet everyone will be checking the wind forecast before this stage.

Very hot. The riders will have to deal with temperatures above 30 degrees on the climb, that won’t be easy for some. The wind is around 20km/h and comes from the north-west. This isn’t as windy as Sunday, but it doesn’t take much to split a race that cuts through the desert.

We have a lot of headwind for the opening 70km, but when the bunch turn right Al Hayer, the shit will hit the fan. We have a perfect cross/tailwind, and when the bunch turn right and head towards the mountain it continues as a cross/tail until km 140. This is a monster section of exposed roads and we’re in for more chaos, just what the doctor ordered!

I’m sure we all know this one pretty well by know. We have a very wide highway, steep gradients, and a long old slog up to the peak. Officially 10.1km at 7%, this mountain features lots of sections over 10%. It also includes the downhill section that leads into the final kick up to the line. The wind direction means we’ll have a tailwind on the climb.

DQS, UAE and Ineos survived the echelons in the opening stage, but there is no guarantee they’ll dodge the bullet again, apart from DQS! The Belgians are the experts, it’s almost inconceivable that the miss any splits, as they’ll be the team doing the splitting. Who joins them is unknown, a lot has to do with securing a good position when the road turns right.

The echelons means the morning break has little chance of surviving, it’s a suicide mission with headwind to begin with and then crosswinds for 70km. It wouldn’t surprise me to see a very cagey peloton at the start of the stage, with everybody waiting for the crosswinds.

If the race does split, the final climb will be even harder than usual. Teams will try to split it, and I think it will. DQS will be there with Almeida, and with UAE looking in good shape I would also be surprised if Pogačar misses the split. As for the rest of them, I have no idea!

Just in from Haut Var, the main man is back. A word of warning, he’s a little grumpy due to an over enthusiastic person doing his PCR test at the airport.

Gather round boys, this stage is the big one. You were brilliant on Sunday, but João, how did you get gapped in the sprint? Amateur! That’s not good enough. Nothing will happen in the opening 70km of this stage, but we need the best position when the road turns right. Iljo, Sam, Shane and Michael, your job is to put the climbers in the right position and then create the echelon. I want João, Mattia and Fausto in the front group. Once it splits we ride, the conditions are perfect to take us all the way to the mountain.

Once there, we ride clever. If that Slovenian lad is isolated, we take it in turns to attack him. Mattia and Fausto it’s your job to work him over, leaving João to follow the wheels and attack when everyone is tired. João, this is your chance to show everyone the Giro wasn’t down to luck. Go wolves!

Tadej Pogačar – despite this not being a “big” race, I sense a lot of pressure on him to win. The team’s sponsors are desperate to win their home race and Pogačar is the main man. He coped well with the crosswinds on Sunday, but if the wind blows it will be another test for him. UAE have a good team at this race, but not many echelon experts. They know that DQS will try to test them, can they cope? If Pogačar gets onto the climb in the front group, all eyes will be on him. He starts as the massive favourite, but that also brings tactical pressure. He has a strong climbing unit with him, but if they are dropped, he’ll come under fire. Despite all of this, he’s still the rider most likely to win.

João Almeida – he’ll hope the wolves can destroy the peloton, and also have a number of riders in the front group for the climb. Both Masnada and Cattaneo are strong climbers, they will provide much needed help on the mountain. Almeida is also a very strong climber, especially in a stage with just one climb. Can he cause a slight surprise?

Adam Yates – given his love of hanging around the back of the bunch, I was slightly surprised to see him do so well on Sunday. Yates was brilliant on this climb last year, he put everyone to the sword. The Englishman does go very well on slopes above 10%, the mountain is a good one for him. Ineos will hope the likes of Luke Rowe and Filippo Ganna will be able to help protect him in the wind, allowing Yates to start the climb in the front group. If he has the same legs as last year he’ll be hard to beat.

Emanuel Buchmann – he lost out in the crosswinds, which means his GC bid is over. If he can survive the potential crosswinds, he’ll be up there fighting for the stage win. Being far down on GC is perfect for a lot of climbers, it should buy them some freedom on the mountain.

Alexey Lutsenko – he’s in the exact same position as Buchmann. Survive the crosswinds and hope to have some freedom later in the stage.

Chris Harper – don’t underestimate the Jumbo-Visma rider. He now sits 4th on GC and has a real chance of landing a massive result in a world tour race. The Aussie is a very good climber, his outstanding performances in the Tour of Japan and Tour de Savoie Mont Blanc back in 2019 is why he landed a contract with the Dutch team. A rider who’s used to hot conditions, he has a chance of surprising the big names.

I think the race will split in the crosswinds; the direction of the wind is perfect for so long that it’s going to be very hard to hold the race together. He might not ride for DQS, but I still think Tadej Pogačar will take the win.