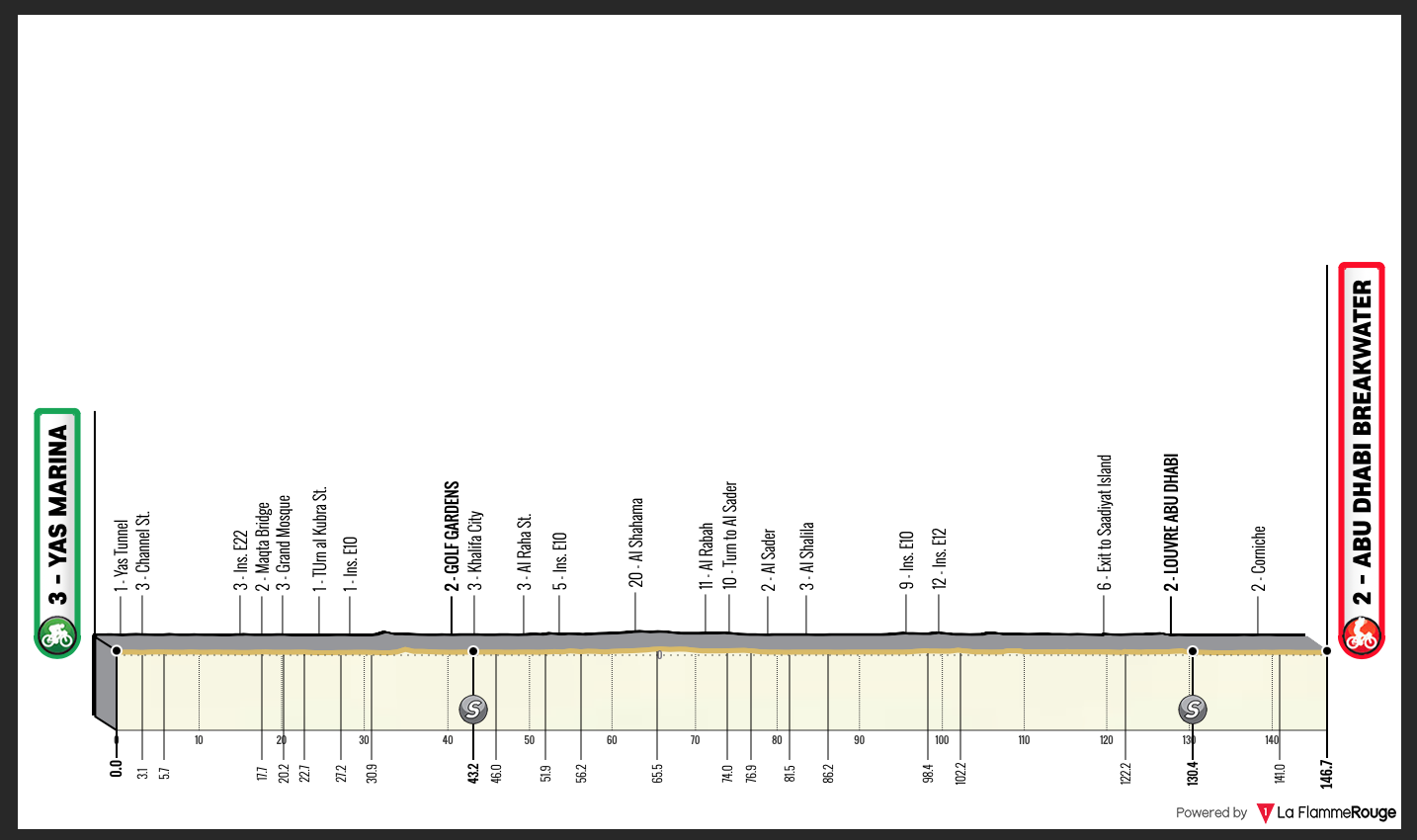 This one should be another sprint, but we might see a few echelon attempts along the way.

Another sunny day, the wind is coming off the sea and will be 25km/h.

This 12km stretch of road ends with 53km to go. It has a lovely cross/tailwind and represents a chance to test out some legs. Teams will try, but will they be successful?

DQT and Ineos will have one last attempt to try and put Pogačar into trouble, but he looks very difficult to drop given his current form. The sprint teams will hope for an easy day and a nice big sprint.

There is a corner with 6km to go, then it’s a straight road until 1.4km. We then have a right turn and full gas to the finish. There is a slight bend with 400 to go, but it’s nothing to worry about.

Sam Bennett – today was another masterclass by DQT, Mørkøv is a Jedi knight in the art of the lead out. Bennett has taken two from two, what a brilliant start to the season. The last stage is a great chance for the Irishman to take three stages in a world tour race, something that doesn’t happen very often. There is no pressure to win again, but he’ll want to.

Caleb Ewan – just not happened for him yet in this race. Despite having a good sprint train, Lotto have found themselves in the wrong positions and Ewan hasn’t been able to challenge for a win. You can bet the team have been frustrated, but the season is long and there’s no need to panic. The squad need to keep having faith in what they do, and the wins will come.

David Dekker – one of the revelations of the race. It can take sprinters time to settle at this level, but Dekker has taken to it like a duck to water. Despite not having much of a sprint train, he’s been up there challenging in all the flat stages. Winning against the likes of Bennett and Ewan was always going to be hard, but it’s impressive how close he’s been.

Pascal Ackermann – I said in an earlier preview that I don’t see him winning with Selig, I’ve not seen anything to change my mind.

Cees Bol – DSM did a good job today, but they got into position a little too early. They got a good spot on the correct side of the road, but teams on the left came with more speed, and Bol lost his chance to sprint. He’s another who doesn’t need to panic, he has the kick to win big races, and the season is long.

Giacomo Nizzolo – given his lead out, the top 5 is about his maximum.

Fernando Gaviria – UAE have enjoyed a successful race; they have one stage win and Pogačar will take the overall. They can now set their sights on taking a win with Nando. Today was a step in the right direction, but I think they’ll have more men to support him in the final stage. With the red jersey secure, Pogačar will likely try to help out his friend, as will the rest of the squad. With all that firepower at his disposal, I expect a big result from the Colombian.

Will DQT continue to get things right? I’ll take a risk and go with Fernando Gaviria; I think UAE might just get it spot on.