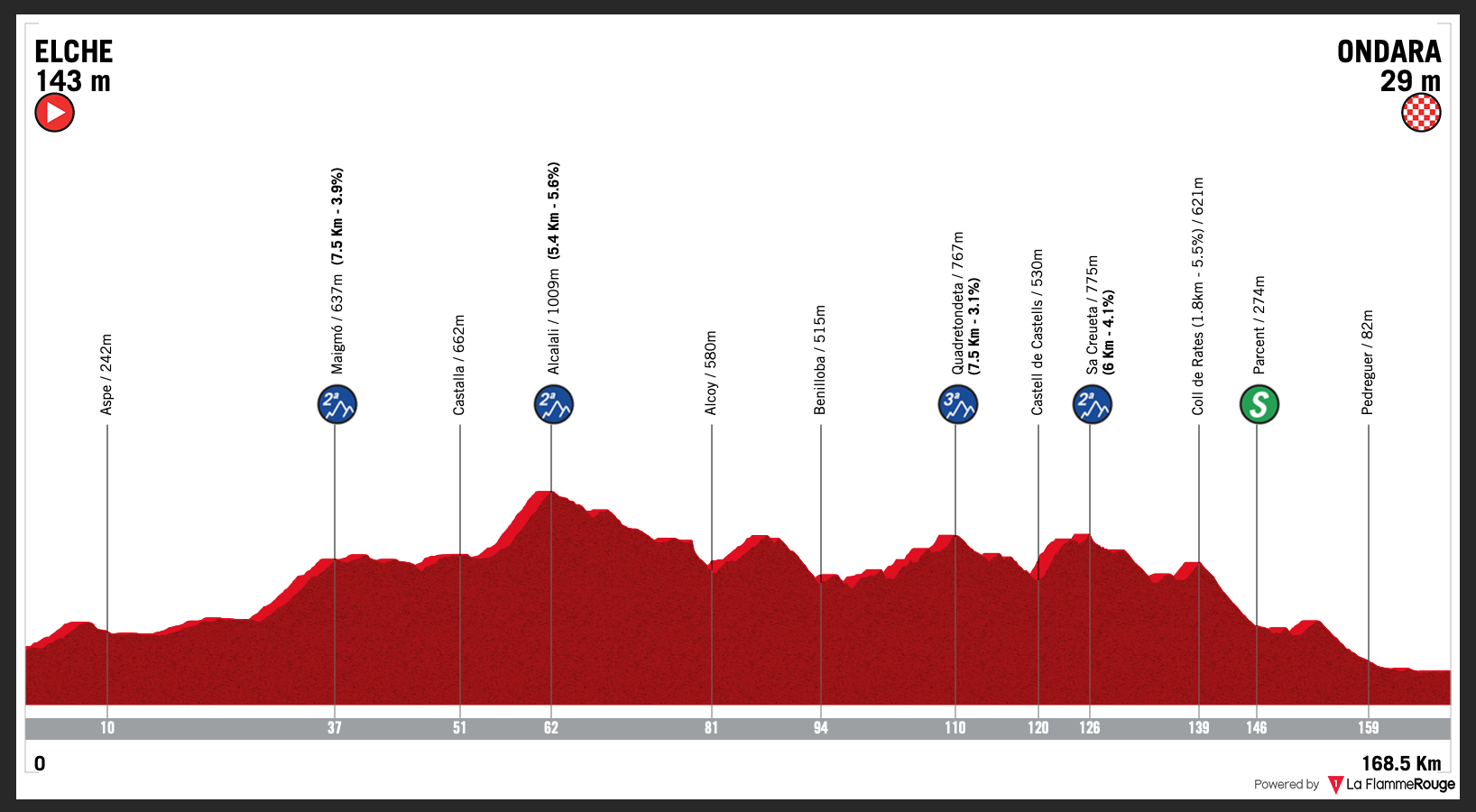 The opening stage has 2721m of climbing, which could be too hard for some of the sprinters, but it really does depend on the attitude of the peloton.

Temperatures are okay, but it will be a cloudy day for the bunch. There is a chance of rain, which would make some of the descents a little tricky. The wind is around 15km/h and comes from the east, that means a headwind for the final two climbs and the run for home.

The Quadretondeta climb is only a cat 3, but it’s got lots of tough sections.

Sa Creueta is the last classified climb of the day. It is 6km at 4.2%, and again it features some tough sections. The crest comes with 43km to go, most of which is downhill, which is good news for the sprinters.

The final 5km is nice and easy. The last turn comes with 3.7km to go, and then we have a roundabout with 3.2km remaining. After that it’s a clear run for home, it’s about as straightforward as you can get.

It all depends on the attitude of Movistar. Most teams will be happy with an easy day in the saddle and a sprint finish, but the Spaniards don’t have a sprinter, which should spell danger. I can see them hitting the front for the final two climbs and push the pace on to see if they can drop some of the sprinters. They are the only team who can stop a sprint from happening, but will it be hard enough to drop all the fast men?

Caleb Ewan – after his sensational performance in Milan-Sanremo, all eyes will be on the Aussie. That day he climbed better than I’d ever seen him before, which is good news for this stage. The climbs aren’t overly hard, I expect Caleb to survive and sprint for the win. With just one win to his name this season you can bet he’ll be motivated to win this stage. He doesn’t have a long sprint train to support him, but Degenkolb and De Buyst are good enough to put him into a good position for the sprint.

Arnaud Démare – took his first win of the season in La Roue Tourangelle, which will have been a relief for him after a tough start to the year. He wasn’t allowed to race in Scheldeprijs due to a positive COVID test in the team, but he’s free to race here. FDJ come with a long sprint train to support their main man, he has his usual men in front of him: Scotson, Sinkeldam and Guarnieri. These guys are brilliant, they rarely get it wrong. It will be interesting to see him go up against Ewan.

Timothy Dupont – his win in Bessèges was a great start to the season, but 3rd is his best result since. The Belgian is a very fast finisher, but he doesn’t have the strongest sprint train at this race, which will make it very hard to win.

Jon Aberasturi – would prefer an uphill sprint, he doesn’t really stand a chance against the speed of Ewan and Démare.

JJ Rojas – can Movistar drop all the sprinters allowing Rojas to take his first win in five years? Probably not, but I hope they try.

I think we’ll get a sprint and Caleb Ewan will take the win.