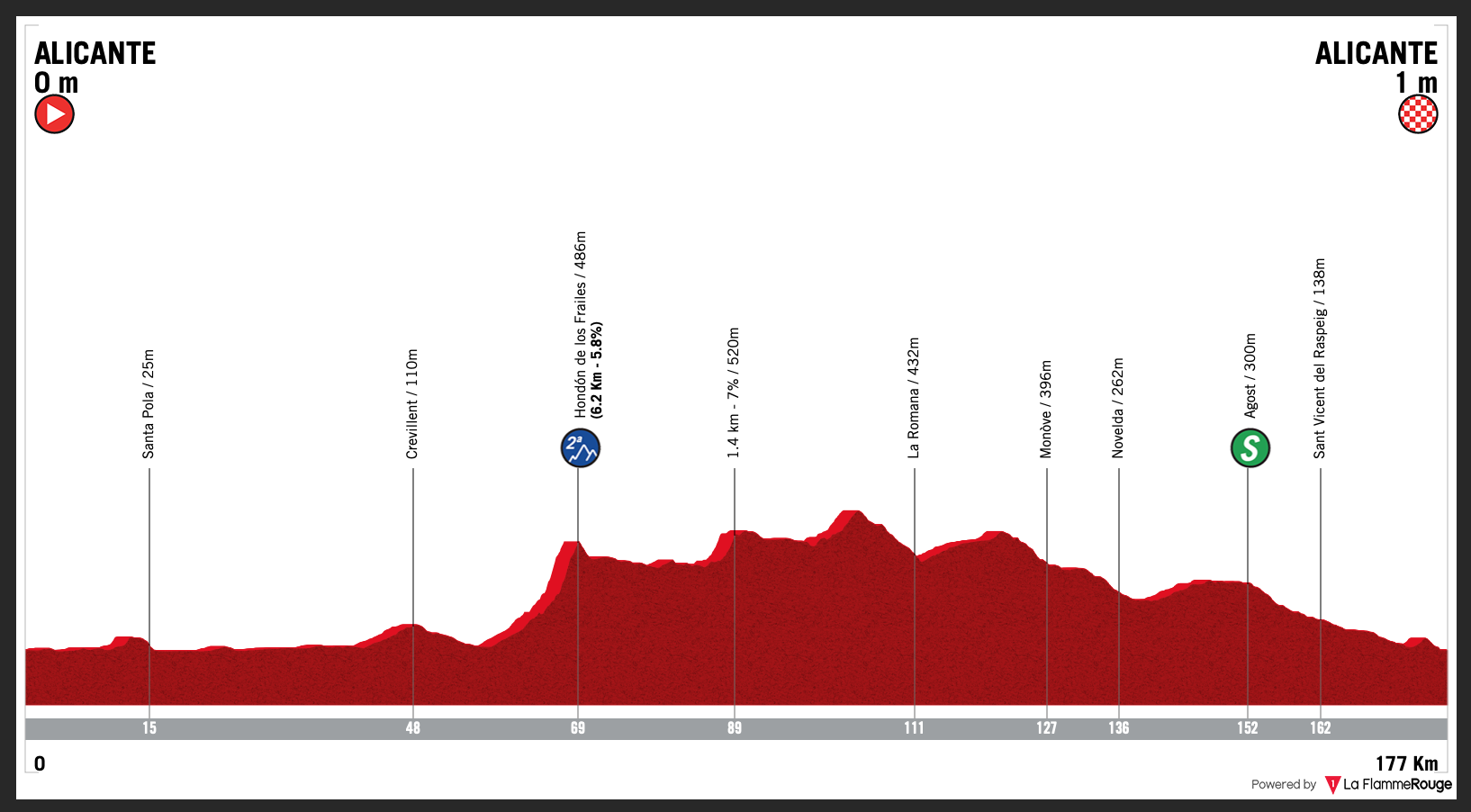 On paper this is an easy sprint stage, but the weather Gods might not agree.

There’s going to be a lot of rain throughout the stage, and quite a strong wind coming from the north-east. We’re talking about speeds of 30km/h and above, which is certainly strong enough to cause some splits.

The opening half of the stage features open roads and a lot of cross/tailwind. This is perfect to cause splits if anyone wants to. The problem is the second half of the day is mainly a headwind, which normally means teams aren’t overly keen on wasting energy early in the day.

With 7km to go the bunch make a right turn and start to head south, this means a cross/tailwind. Most of this road is well protected from the wind, I doubt we’ll see splits here.

Very straightforward as it takes place on a wide highway. There’s nothing to concern the sprint trains.

Does anyone want to split the race in the early stages? Movistar and Groupama – FDJ both have seven riders and normally go well in windy conditions, but I just don’t think either will want to split the race, there really isn’t any need to do so. I think everyone will be happy to sit in the bunch and try to hide from the rain, the type of race we get is really up to the big two teams.

Caleb Ewan – took 10 days off the bike after Sanremo, which is quite a big break. The Aussie is hoping to ride all three grand tours this year, which means he has to carefully manage his schedule. Lotto Soudal are now down to just four riders, which means they don’t have too many to get involved in chasing the break, they’ll hope FDJ do that. They still have Thijssen and Degenkolb to help prepare the sprint, and we saw today that Degenkolb is currently going well. If Ewan isn’t there for the sprint, the German will get another chance to show what he can do.

Arnaud Démare – another who didn’t cope today, but he’ll be looking at this stage as a chance to stretch his legs. FDJ are in the race lead, thanks to a brilliant ride by Miles Scotson, they should be happy to control the stage and set up a sprint. As I’ve said, there is a chance the race splits, but they are usually very good in these conditions. Démare will want a sprint, I think they’ll make sure he gets one.

Timothy Dupont – another who’ll be hoping for a quieter day in the saddle. Winning against Démare and Ewan won’t be easy, but the same goes for all other sprinters.

Simone Consonni – the Italian was 5th today, which was a decent ride. He rarely gets a chance to sprint for himself, he’s normally stuck on lead out duty for Viviani, but he is fast. If Cofidis get the lead out right, he has a chance to challenge the big two.

Alfdan De Decker – I’m a big fan of the young Belgian, he is very fast in a sprint finish. He spent the last two years at Wanty, but has now stepped down to conti level, but he will hopefully impress this year and step back up in 2022. He rides for Tarteletto – Isorex, hopefully they can get him in a good position, and he can show his speed.

Jon Aberasturi – fast, but faster in an uphill sprint. He should be one of many riders eyeing the podium.

Rain and wind, not what the doctor ordered. I do wonder if the peloton will agree to have a sprint finish. I’ll go with Caleb Ewan.