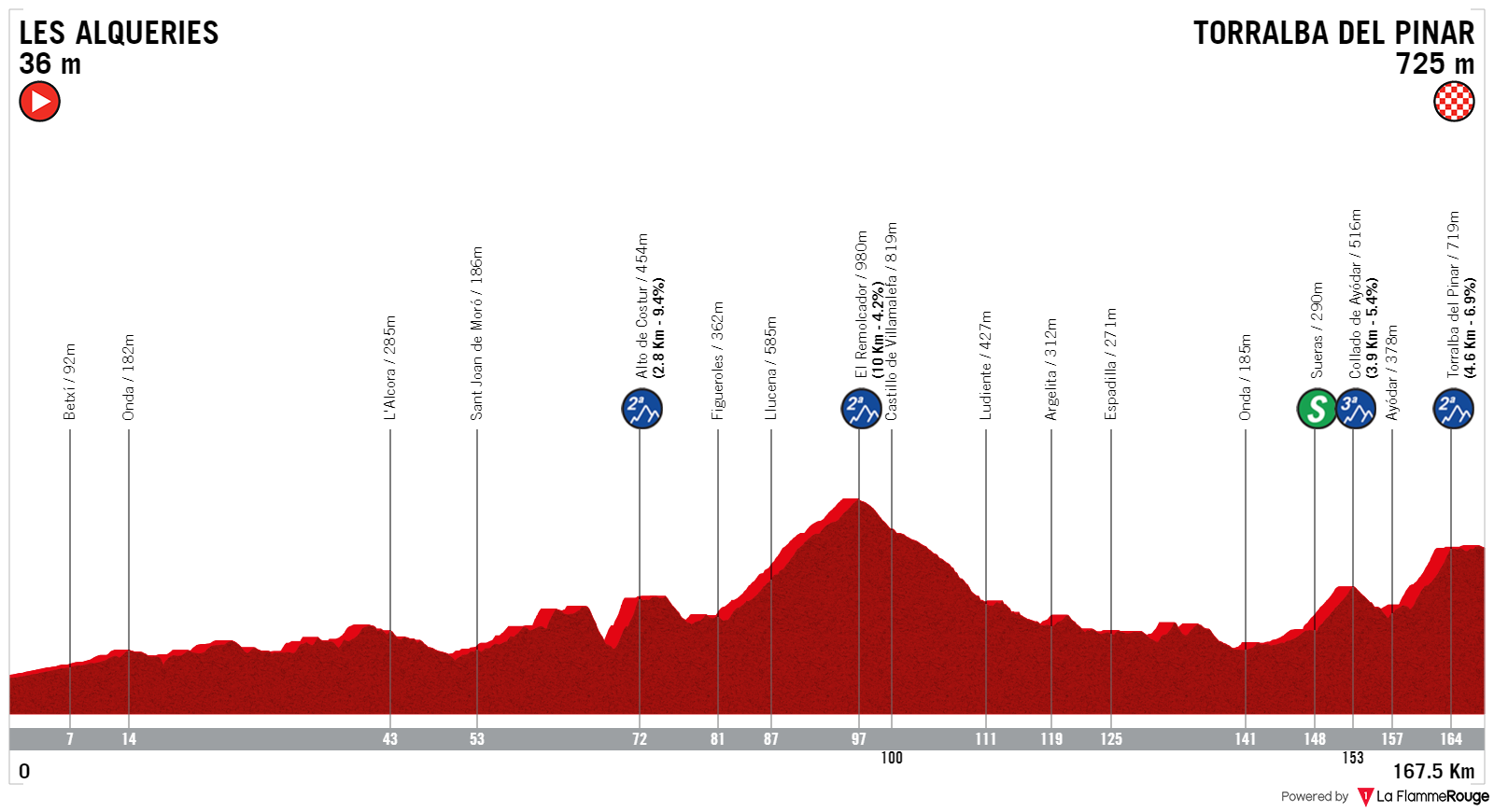 The opening stage of the race is a hard one and will make for early fireworks. In the classic rolling hills you find just about anywhere in Spain the riders will have to climb over 3000 meters, the stage should be decided in the final kilometers as most will want to wait to the final climb. 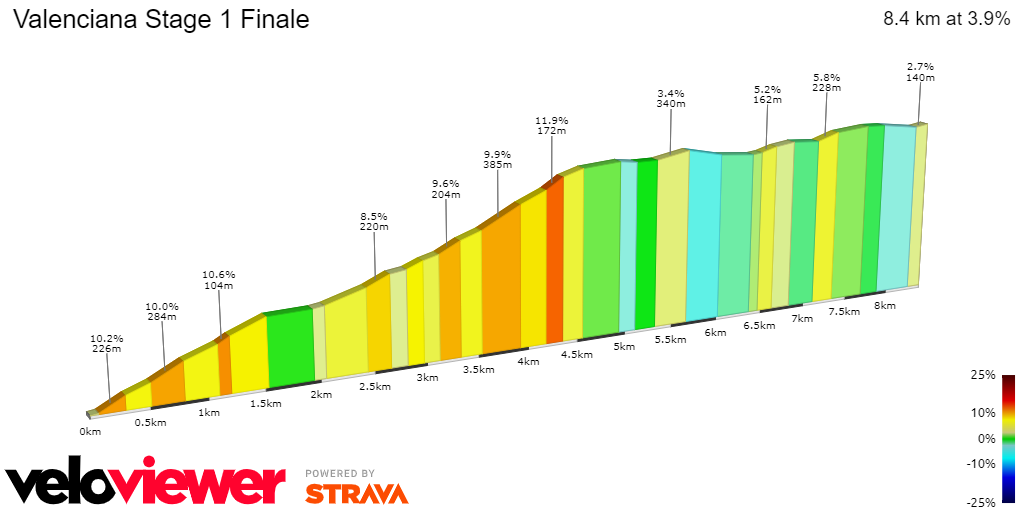 The final climb to Torralba del Pinar is by no means brutal but it isn’t an easy task. 4.6Km at 7.8% with a noticeable flat section around the halfway point. Safe to say, the puncheurs may very well take part in the battle for the stage win and bonifications aswell. The ascent summits with just 3.5Km to go and from there on the roads to the finish are very fast, with a rolling plateau that quickly leads to the center of the small town into the finish line. 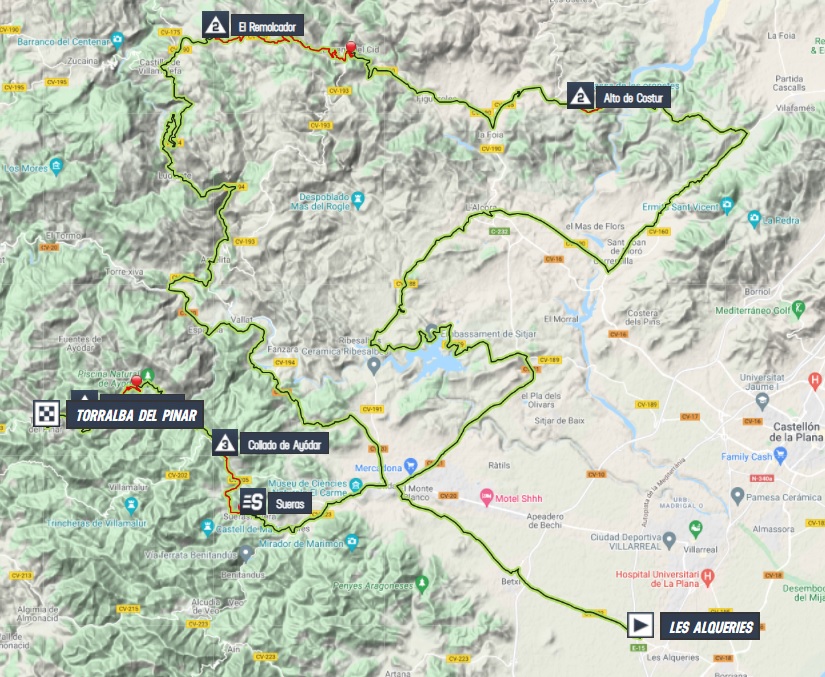 The sun will be out and the temperatures in the 20’s, nothing to bother the peloton.

Being the opening stage there won’t be a team that has the responsabilities to pick up the race. However, Movistar at least is likely to do it. The terrain is hilly but it’s only the first stage, many riders will be looking to feel how they are before going for elusive breakaway attempts.

Alejandro Valverde – Winning Trofeo Pollença was the win he needed to kick off his season. Bala has some form, it won’t be easy to distance him and he’s also got a good sprint that will make him a favourite if it comes down to a sprint, with Enric Mas capable of shutting down or covering moves.

Quick-Step – Remco Evenepoel will be an interesting card. This isn’t the most suited stage to him, it will be an explosive finale but if he gets a gap then he’s going to be quite impossible to catch. The same can be said with Mattia Cattaneo but specially Mikkel Honoré, the Belgian team comes packed with options for this stage.

Bahrain – Pello Bilbao and Dylan Teuns should be the GC options and they are the type of riders that aren’t usually covered in the peloton. They have however the quality to survive and have legs to attack, and like Quick-Step they have a puncheur as a backup in Matej Mohoric, who should struggle a bit uphill if the pace is hard but in a group will be a big threat for the first lead of the race.

Ineos – Tao Geogheghan Hart, Pavel Sivakov and Carlos Rodriguez set to be up there in the ascent. The queen stage will suit them better, but having numbers will be important here and they can succeed if they infiltrate the right move.

Bora – The same situation as Quick-Step and Bahrain. For the GC Aleksandr Vlasov and Wilco Kelderman who should be good for the climb, Ide Schelling provides the team with a possibility in case of a sprint as he should be capable of going over the ascent with the best.

Israel – They can only do so by attacking, but a win is possible for Israel. Jakob Fuglsang and Ben Hermans come in leading the team and with little indications of form for a lot of riders, the veteran duo’s chances will be as high as the majority.

But more riders will pop up. The climb isn’t overly hard and surely many more will resist, and I believe the win will come from an opportunist climb over the top of the climb, as uphill the favourites will cancel each other, but afterwards that won’t be the case, and many riders won’t be covered like the main favourites. Those will include UAE duo of Marc Soler and Juan Ayuso, Soler mainly is usually a very dangerous rider for this type of sketchy stages. Trek’s Giulio Ciccone, Lucas Hamilton and David de la Cruz will also be eyeing a strong start to the race.

#183 Héctor Carretero – We’re looking to have a good GC tilt here Héctor, there won’t be stages suited for breakaways so some of our guys will try and get in but just for TV time and maybe a stint in a jersey. You and José are going for the overall, José particularly as he’s been showing some decent form. Tomorrow will be complicated as the competition is strong but you have to at all costs try to resist the climb and stay close to the best. If you see it’s not your day then make sure you support José up there and then fall back, you can also go for a breakaway later on.

#156 Jonathan Lastra – Today is your day Jonathan, the sprints won’t be good to us and the big climbs will hurt, tomorrow there is a possibility for the puncheurs to succeed so we hope you can get up there. The strategy is simple, hang around well positioned, Mikel and Eduard will also be protected so if you find yourself without support don’t stress, try to resist the climb, always follow wheels. At the summit hopefully you can see the front of the race and try to hit it in a sprint.

#62 Pello Bilbao – Pello, we have some good options here, we want some good results from Valencia. Dylan will share leadership duties with you and you will both be protected, Matej will also target this stage if he feels good. The tactics are clear, the climb will be a battle field and Movistar will cover everything, many teams have a lot of riders so make sure you cover moves when possible going up, but don’t attack yourself. You three, ideally you’ll all be there, have to go on the attack straight after the summit taking turns, if someone has a gap it’ll be very hard to reel in, I don’t think you’ll have much cover so definitely shoot your shot.

Mikkel Honoré is my call to win the opening stage. Form is relatively unknown, but I trust that eyeing the classics he will already be riding at a high level. He can climb and this is a punchy one, Quick-Step will have several options and either in a sprint or solo, the Dane can take it.

Tomorrow’s race has prizes of at least €100 and an entry fee of only €2.5. Make good use of your knowledge! https://zweeler.com/game/cycling/FantasyVoltaalaComunitatValenciana2022stage1/main.php?ref=790