Another chance for the sprinters.

Again, the profile doesn’t really do the finale justice as the peloton have to deal with a kicker in the closing kilometres.

It’s quite an unusual finish, in my opinion. 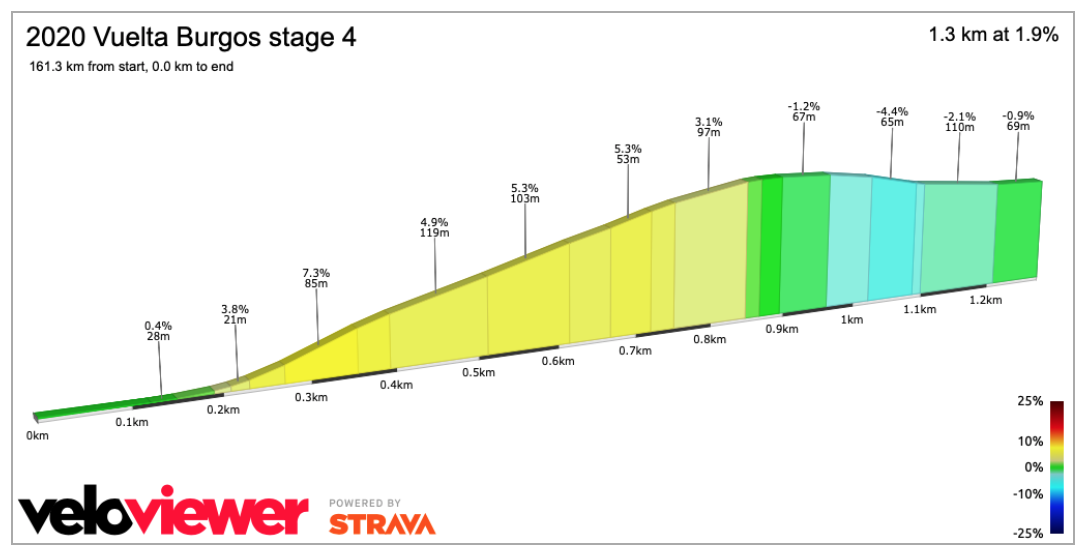 The bunch will be going full gas into the tight right-hand corner with 1.3km to go, then the gradient kicks up. As you can see we’re not talking about anything too steep, but it does last for 600m. Once over the crest, we have a fast descent to the finishing line. I don’t remember seeing many finishes like this. To win the stage you must be in the first five riders at the top of the kicker, there just isn’t time to make up lost ground in the final 300m. It should still be one for the sprinters, but some of the puncheurs will also be interested.

Sunny, with a little wind coming from the west. There is a chance of some echelons along the way, especially from 50km to go until 35km. A second chance occurs in the final 10km.

Sam Bennett – not really been his race yet. He wasn’t feeling well on Tuesday, but he wouldn’t have competed for the win anyway. On Wednesday he didn’t quite have the right position for that crazy final corner. This is his last chance to win a stage, you can be sure the QuickStep boys are super motivated to follow up today’s win with another. They have the best lead out, so getting Bennett into a good position for the corner shouldn’t be a problem. It will then be up to them to set a very fast pace, but also keep Bennett at the head of the bunch. This isn’t as easy as it sounds. When the attacks fly, Bennett needs to make sure he can respond and not lose position.

Fernando Gaviria – that was a very impressive win on Wednesday. UAE only have four men left in their team, I’m not sure how they managed to get Gaviria into such a good position for the final corner, but they did it. Now, doing it again will be tough, but not impossible. Given how fast he looked the other day, Gaviria will be confident of taking another win.

Arnaud Démare – the finish suits him and FDJ also have a good lead out. The problem is, he just doesn’t win much anymore.

Giacomo Nizzolo – his type of finish. The Italian isn’t as fast in a flat sprint as some of his rivals, but he is much better going up a hill like this. His train isn’t the best, so positioning could be an issue. If you have a bad position for the corner you have no chance of winning the stage.

Edward Theuns – Trek have looked good throughout the whole race, but are yet to threaten the scoreboard. This is a finish that Eddie will look forward to, he is capable of smashing up it faster than most. Maybe he will go from the bottom and be a legend!

Matteo Trentin – very impressive on Tuesday, he was climbing at the very front of the bunch the first time up to the castle. Not only that but his team did a great job of putting him into the best possible position. This effort is shorter and not as steep, which is perfect for the Italian.

Remco Evenepoel – why the hell not?

I’ll go with Matteo Trentin, he should be able to keep a great position on the climb and sprint for the win.