A stage we should all know well. 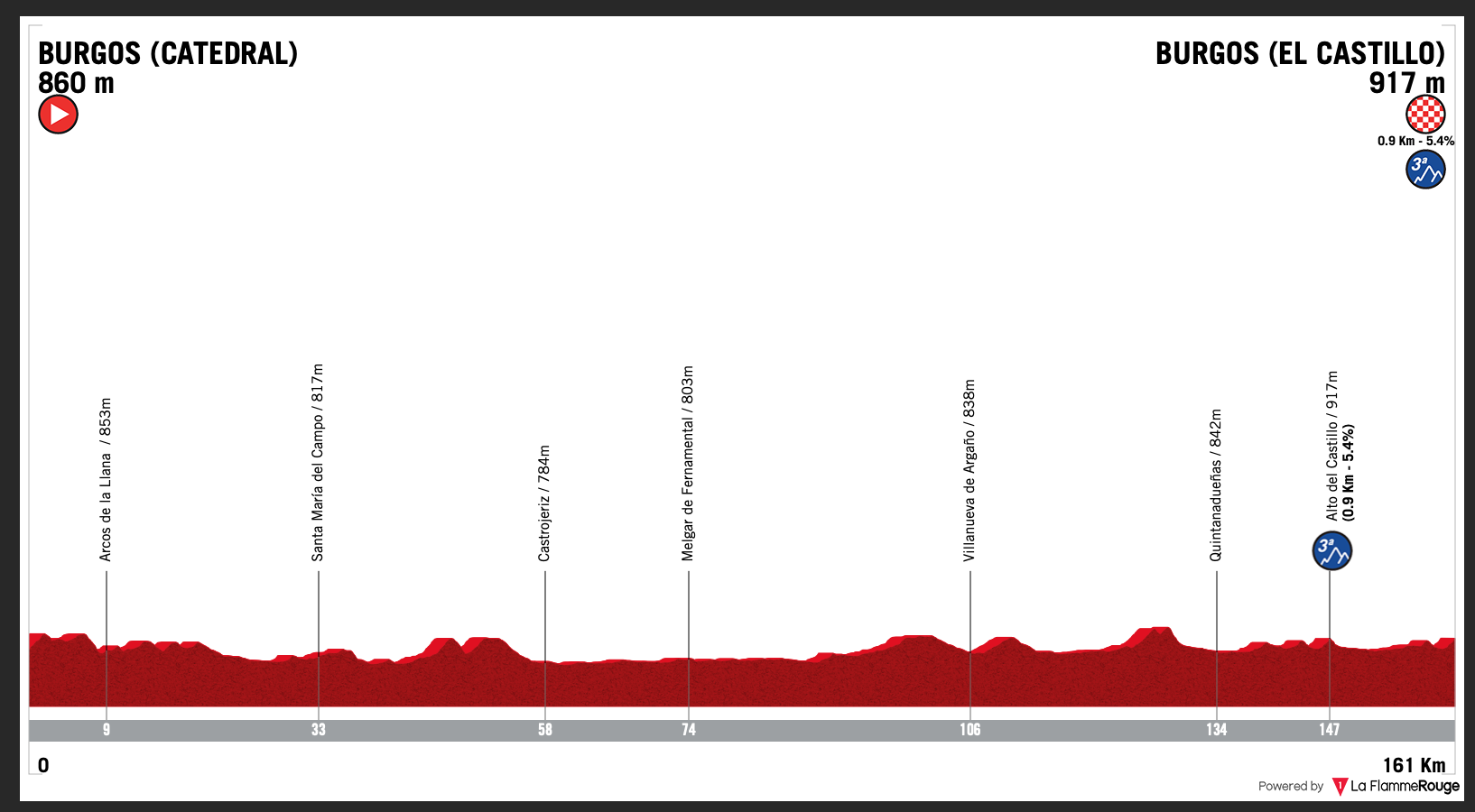 The opening stage of the race always finishes up at the castle, this year is no different. The finish is tough, it offers hope to the puncheurs but also the sprinters who climb well. Positioning at the foot of the final climb is everything, you need to be near the head of the group for the flamme rouge if you want to win the stage.

Warm with a relatively strong wind coming from the west. It could reach 20km/h, which means one thing.

This part of the world is very exposed to the elements and the wind direction means we have long sections of crosswind close to the finish. This section comes with 50km to go as the road turns left and the bunch go north. Positioning for the turn will be important, this is where Quick Step and Trek created echelons last year.

This section is when the bunch turn and head south back towards Burgos.

Finally, we have this section which starts with 30km. This means we have possible echelons for around 30km. Teams will try to split it; we’ll have to wait and see if the wind plays ball.

900m at 5.8% doesn’t really do it justice. Firstly, we have a massive battle to control the peloton for the start of the climb. Those in weaker teams have no chance of being at the front. Then the climb starts with a bang, it knocks the stuffing out the legs before it levels off. The final 500m gets harder and harder all the way to the line.

Last year the stage was won by Felix Großschartner, who attacked with around 700m to go. This isn’t normally how the stage is won, but it shows you the merits of a well-timed attack. The Austrian is a climber but has a punchy finish. The year before the stage was won by Nizzolo, it shows that different types of riders can win here, which makes it fascinating to watch.

Matteo Trentin – the Italian enjoyed a fine spring campaign, but he couldn’t get the elusive win. He’s now got a couple of races in the legs and looked in fine form in Getxo, where he rode a very aggressive race. This finish is one that suits him well, but he needs a good position for the final kilometre.

Sep Vanmarcke – he was flying in the recent Italian race, but just couldn’t get a win. He’ll look at the final kilometre of this race with a lot of excitement, it’s a finish that suits him well. One issue could be positioning for the final kilometre, his team doesn’t look that strong.

Jhonatan Narváez – the Ineos rider doesn’t win much, but this is a good one for him. Ineos will be looking to protect Bernal as this stage can see small gaps on GC, but I think the Ecuadorian will have a chance of going for the win. If his teammates make the pace on the climb, he’ll hope that some of the faster riders will be slowed down a little.

Gonzalo Serrano – won a similar stage in Andalucía, the Spaniard loves an uphill finish. Arguably he’s the fastest finisher, but will Movistar be able to position him well for the start of the climb? Looking at their squad I have my doubts, Serrano might have to try and jump on the Ineos train.

Rob Stannard – another rider who loves an uphill sprint. The Aussie has impressed this year, but he’s still waiting for his first professional win. He probably would have gotten this in Andalucía but was taken down by Daryl Impey. Stannard was brilliant at under 23 level, but it’s taken him a while to find his feet amongst the pros. The recent signs have been positive, I think he’ll be winning soon.

Egan Bernal – if the race splits in the wind, and we have a smallish group for the final climb, the Colombian cannot be written off. He won’t win from a full group, but Ineos will be one of the teams looking to split the race and put the hurt on. This is a tactic they used back in 2017 when Mikel Landa took the win, climbers can win this stage.

Teams will look to split the race in the wind, it’s too good an opportunity to turn down, but I’m not sure we’ll see any of the big names miss out. In the sprint finish I’ll take a win for Gonzalo Serrano; he’s going very well just now.