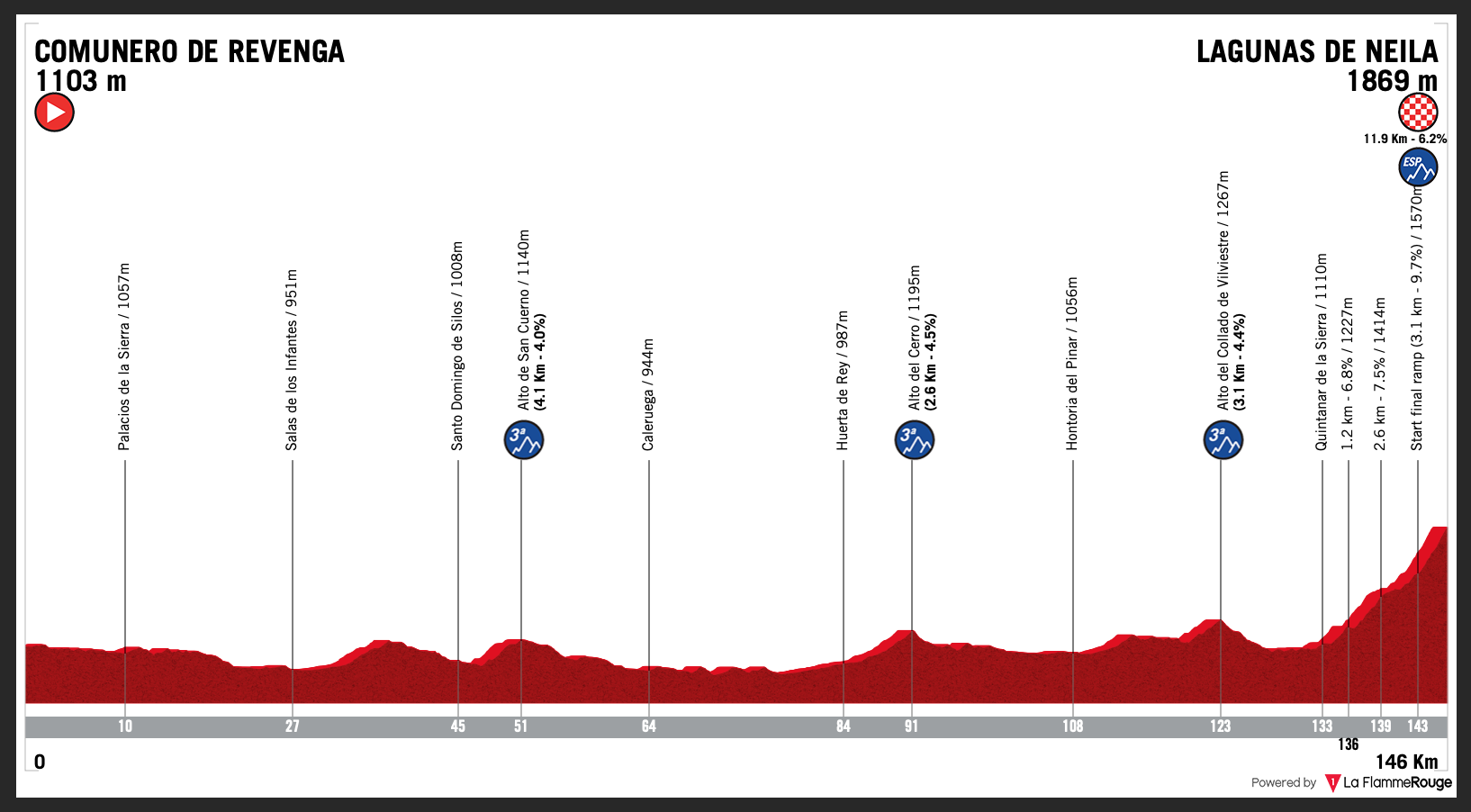 Romain Bardet has an enormous lead, 45s to Landa and 60s to Aru, the GC battle is over as long as the Frenchman stays on his bike. DSM won’t be concerned about chasing the morning break, that will be the responsibility of those who want the stage win. This will allow the team to save Arensman, Tusveld and Hamilton for the big climb. They will want to stay with Bardet as long as they can, they know that Landa will attack, and it would be good if Bardet doesn’t have to chase himself.

Bahrain is the team most likely to chase the break, this is a climb Landa knows well, and his form seems to be building. Despite the gap being big they’ll attack Bardet and see if they can crack him, they have the team to make the climb uncomfortable for the race leader. Also looking to join in the fun will be Qhubeka and Ineos. Aru and Pozzovivo did well on Thursday, that took me by surprise. Pozzovivo was the strongest of the pair, but he dropped out of the GC picture today after being held up by the late crash.

Ineos have not enjoyed this race. The big crash in the opening stage ruined their GC hopes, they arrived with Bernal and Yates as leaders. Sivakov did provide them with an option, but his current form clearly isn’t good enough to win this race. Bernal rode as a domestique on Thursday, but now that Sivakov isn’t going to challenge for the win I wonder how they’ll approach this stage. The crash clearly had a big impact on Bernal, he would normally have won Thursday’s stage by a considerable distance. His fitness will dictate how they approach the stage.

Another sunny day. The wind is coming from the west and will reach around 20km/h. We have lots of potential crosswind sections throughout the stage, but the roads are better protected than those in the early stages. The final 2.5km of the climb is a headwind.

11.8km at 6.2%, but that includes a lot of “easy” sections in the opening half. The second half of the climb is incredibly difficult, it really is one for the pure climbers.

All eyes will be on Bahrain. They have a strong team, one that can dominate the climb. They’ll go for a traditional mountain train and Landa will attack with around 4km to go. This move will likely be covered by Bardet and then they’ll be an opportunity for a rider who is a little further down on GC to jump away and take the win. This is the exact same position Landa was in last year, when he was trying to beat Remco, but it was Sosa who took the win. Bardet doesn’t need to win the stage; he just needs to watch Landa and make sure he doesn’t get a big gap.

Mikel Landa – considering what happened at the Giro he’s looked in very good condition in the last few stages, the signs are very good for La Vuelta. To win this stage he needs to attack and either go solo or be with Bardet, there is no need for Bardet to steal the stage win. Bahrain has the team to make the climb uncomfortable for the other riders, but does Landa have the legs to finish it off? He has looked good, but he’s still not at his best after a long period off the bike. He’ll be getting better with every stage; this is a chance for him to take his first win in over two years.

Romain Bardet – I don’t think he’ll be interested in the stage win, it’s all about covering Landa for the GC. Now, if he’s clearly stronger than everyone else he’ll look to attack, but there really isn’t a need to do anything silly.

Egan Bernal – the GC situation is perfect for him to take the stage, but it depends on his fitness. After controlling the group for a long time on Thursday I would expect him to go full gas for the win, there really isn’t any point in riding for Sivakov. If he’s anyway close to 100% he’ll win this stage with ease.

Domenico Pozzovivo – after impressing in the Tour de Suisse it’s good to see the Italian continuing with the rich vein of form. He’ll be up there challenging with the best, but he struggles to win races.

Mikel Nieve – it was great to see the veteran up there challenging on Thursday, it’s been a while since he was in that position. He’s way down on GC, he’ll try and take advantage of this and attack early, hoping that no one chases him.

Geoffrey Bouchard – he was brilliant at the Giro, but his focus on winning the KOM jersey hurt his chances of winning a stage. The Frenchman is turning into a climbing expert, he was one of the best on Thursday. He turned pro late in life and he’s still to take his first pro win, will it be here?

Adam Yates – after he crashed in the opening stage his focus turned to this day. He’s been saving energy riding at the back of the pack and will unleash tomorrow. His chances of success will depend on how he’s recovered from the crash.

There should be enough interest in chasing the break, if Bahrain control the opening stages and ensure that the move is relatively small. On the climb they’ll dictate the pace and I think Mikel Landa will take the win with Romain Bardet in his wheel.