We head back to Valdepeñas de Jaén for the first time in 8 years, how time flies. 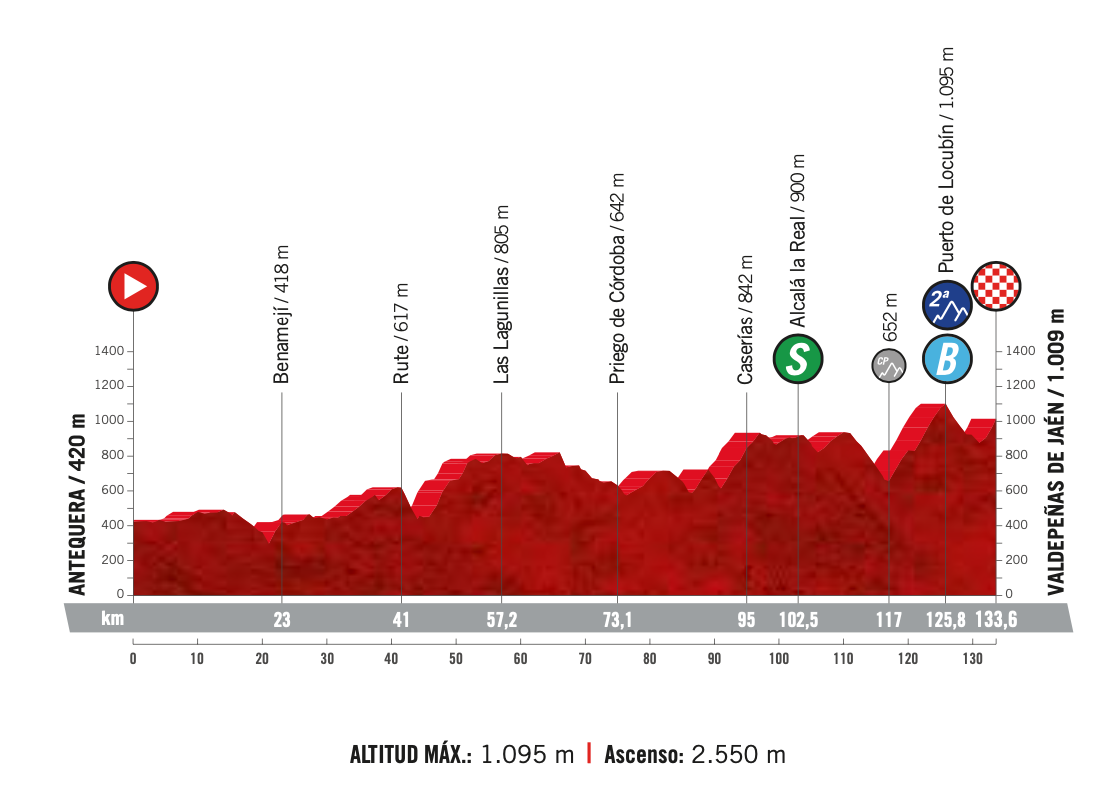 This is the town where I remember watching Purito smash everyone in 2011 and Dani Moreno did the same in 2013, but we’ve not been back since. This town must be a nightmare for the local papergirl, it’s so bloody steep.

The stage is only 133km in length, the shortest stage in this year’s race, it certainly swings the day in favour of those wanting a “sprint” finish. By the time the break forms they’ll be less than 100km to go, perfect for teams wanting to control things. All it takes is for a couple of teams to show an interest and I think the break will be doomed; they can’t really complain after so many successful escapes. The finale of the stage certainly isn’t easy, but it will interest the super sprinters, namely Matthews, Cort and Trentin.

Another beautiful day down in the south of Spain.

The finale kicks off with this cat 2 climb. 8.9km at 4.7% isn’t the hardest, but the pace will be as hot as weather, which will see many riders dropped. From the crest there is just 8km to go, so teams need a fast pace to deter attacks.

This is the Jaén I remember! The final kilometre averages 9%, but that includes a relatively easy section inside the final 500m. The opening 500m averages 10.7% and it has 300m at 13%. The easy section starting with 500 to go will allow some back into the picture, but the final ramp up to the line will finish off the weaker riders. This is a brilliant finish, and it deserves a bunch sprint, not a breakaway.

Will BikeExchange, UAE, EF, Astana and Deceuninck be keen on a sprint? We have 2700m of climbing, but if enough teams want to chase the break, then we’ll get a sprint. The problem is the final kilometre is Roglič territory, but the super sprinters do have a chance of causing a surprise, especially as Roglič hit the deck today. He looked fine, but he’s sure to be a little sore in the morning. The other option is to go for the break and take their chances there, we’ve all seen how hard it is to win from the break, I expect to see teams trying to control for a sprint.

Once the bunch realise they’ll chase down the break it will discourage many from trying to get up the road, meaning a relatively easy breakaway to control. The cat 2 climb does offer a great launchpad for attackers, so the bunch need to make sure the pace is high to deter attacks. Then it’s all about the final kilometre.

Michael Matthews – he was the only one of the super sprinters to miss today’s move, which could mean he’s fresher for this stage. BikeExchange haven’t gotten anything out of this race, they’ll be keen on ensuring it ends in a sprint, it’s their best chance of success. 1km at 9% is tough for Matthews, but when he’s 100% he climbs incredibly well.

Matteo Trentin – looked good in today’s break, this finish suits his classics pedigree. Winning will be tough, but he’ll hope to be up there.

Magnus Cort – already has one uphill win, could this be number 2? His ability uphill continues to improve, it’s quite incredible how well he climbs. The problem will be positioning, I’m not sure he’ll have much help in the closing kilometres.

Alex Aranburu – this is his big chance to take a stage, but it could be too steep for him. Astana have the team to get him into a great spot for the final kilometre, but will he have the power to beat the climbers?

Andrea Bagioli – crashed hard at the weekend, but his legs responded well today. He couldn’t go with the best climbers, but it was a step in the right direction. On paper, this is a great finish for him, but we’ll have to wait and see what his legs say.

Primož Roglič – we’ve been here before; he’s won significantly easier finishes than this. Last year he won in Suances and that was 1.5km at 5.9%. This year he won in Paris-Nice and that was 1.9km at 5.1%. 1km at 9% sounds perfect for Roglič, especially as Jumbo-Visma have the men to position Primož in the final kilometres. Despite the sprinting ability of the riders already mentioned, Primož must start as the favourite, but will he be sore?

Felix Großschartner – the second fastest finisher of the climbers, he has the kick required to challenge for the win, but the problem is Roglič.

Most people will tell you it’s a day for the break, but I’m not most people, I’m the Cycling Mole! Call me crazy but I think someone will hold this short stage together and we’ll get an uphill sprint. In the battle between the super sprinters and climbers, we’ll see an inevitable win for Primož Roglič.