We head to the baking heat of Cordoba. 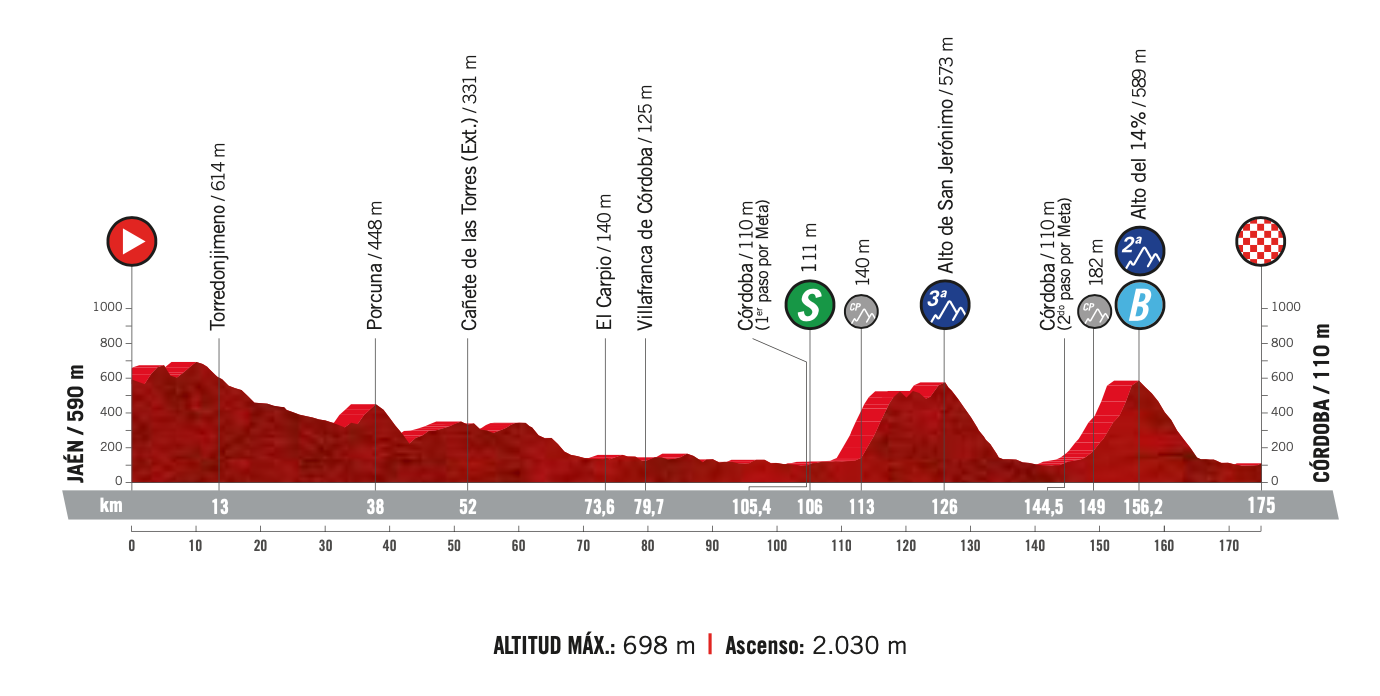 Another stage that will interest the breakaway riders, but some will also hope we get a sprint. It really is in the balance, with just 2054m of climbing in the stage, it’s one of the easier lumpy stages. It’s the position of the climbs that is the problem, the last one crests with 19km to go, that will be a problem for those who want a sprint.

Roasting hot, the riders will be really feeling it by now.

The final climb of the day is a cat 2 effort, 7.1km at 5.7%. Just like the first climb the numbers don’t do it justice, there is a one kilometre section averaging 11%, this is the big issue for the fast men. They will struggle if the pace is pushed hard.

Who will chase the break? BikeExchange chased today, they used up a load of energy, I’m not sure how fresh they’ll be for this one. UAE to ride for Trentin? It is possible, but they don’t have a full squad. EF for Cort? After two consecutive days in the break, Cort is going to be very tired. They would likely be the fastest finishers in the front group, so I wouldn’t expect Deceuninck – Quick Step to chase for Bagioli, but they would be interested on pushing the pace on the final climb if other teams chase all day. Jumbo-Visma chased for Roglič today, but this isn’t a stage for him, they won’t be chasing the break.

Everything is pointing to another day for the breakaway, with little GC action back in the main peloton. The fight for the break will be interesting, there are lots of tired legs due to the tough race and the heat. This break could go earlier than expected, but we’ll have to see about that. The start isn’t hard, we could see riders with big engines in the break.

Deceuninck – Quick Step – they have lots of options for a stage like this, basically every member of their squad, apart from Jakobsen and Van Lerberghe (sorry Fabio & Bert!). After their performance on Tuesday, most will be looking at Bagioli and Vansevenant, but this stage can also be good for Štybar, Sénéchal, Černy and Knox. With so many options, it would be a big surprise if they miss the move. Once there, they are brilliant at sniffing out victories.

Luis León Sánchez – now that Aranburu has gone home I think LL is their best chance in a stage like this. He might be getting on a bit, but with that comes the experience required to win a tricky breakaway stage. Astana haven’t won yet in the race; I would expect a win before the end of the race.

Jan Tratnik – Bahrain will want another stage win, Tratnik is a good shout for this type of stage. He was in one of the first breakaways on Tuesday, a sign that he’s looking to attack and get up the road. The final climb won’t be too hard for him, just remember Zoncolan.

Dylan Van Baarle – Ineos are another team with nothing out of the race. Van Baarle impressed me on Tuesday, I see no reason why he can’t try again in this stage.

Andreas Kron – he’s been mentioned a lot already this week, maybe this is the stage for him. He was 14th today, that’s a sign his legs are good, but he needs to make the break. Lotto Soudal don’t have a strong team at this race, that’s one of the reasons Kron is finding it hard to make the moves.

Andrey Zeits – the beast from the east. That is all.

Thymen Arensman – DSM have enjoyed a brilliant race, and with mountain stages coming this weekend, this stage looks better for someone like Arensman. The youngster was close to winning here last year, I hope to see him in the break.

Quinn Simmons – he’s here to get experience, work for others and get a grand tour in the legs. So far, we haven’t seen much of Quinn, but he will get the odd chance to chase personal glory. Given the two climbs, this is a great stage for him, especially as he has a very fast sprint.

Matteo Trentin – this is a stage he’ll have marked before the race; it is perfect for him. He’s tried already in this race, but it’s not quite worked out for him. The difference in this stage is the final climb is a little easier than in previous stages, but he needs to make the break!

Giulio Ciccone – this stage is big chance for someone like Ciccone to gain time on GC. Wanty are in control of the race, but they won’t care about riders who are 6 minutes down on GC. With a sprint stage coming up on Friday, it is possible for a GC rider to go in this break and recover before the weekend. It could be Ciccone, but also in the same position are Großschartner, Vlasov, Mäder, Meintjes and De La Cruz.

Michael Matthews – he’d be my favourite if it comes back together.

A breakaway win for Andrea Bagioli.