The first opportunity for the sprinters. 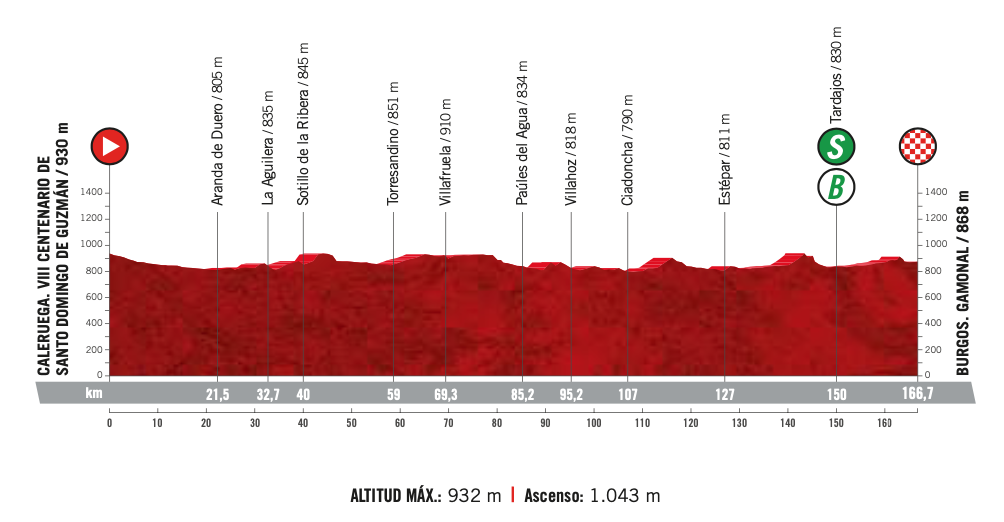 However, the weather forecast will make the GC riders a little nervous.

Roasting hot, we’re talking a maximum of close to 35 degrees. The wind will be coming from the west, which means crosswind for the majority of the stage. Those that have watched the Vuelta a Burgos know that the roads in this part of the world are wide open, there will be plenty of opportunities to create echelons if the wind is strong enough.

The wind will be at its strongest just after the flag drops, at around 20km/h. This section of exposed road comes after just 40km of racing, you can see just how open it is, but there’s still a long way to go.

Soon after the roads continue to be exposed and there is a perfect crosswind. After this point the wind is predicted to weaken down to around 15km/h, which normally isn’t strong enough to split things. If this race is going to split it will happen early in the day, but this usually means things will come back together.

It’s an easy run for home, apart from the roundabouts, as all of them only have one side open. This will string the bunch out, having a good early position will be very important. Once the bunch turn right with 4km to go we have a long straight road. The fight for the front of the peloton will be fierce, the teams who control the front can take the roundabouts at their pace. Those further back will have to fight for their spot, it is very easy to lose your place and get swamped.

The final turn comes with 1.6km to go, allowing those who are a little further back to move back up the bunch. The finishing straight is a nagging false flat, launching early would be a mistake.

Some will try and create echelons, but if the forecast is true and the wind weakens throughout the day then this should end in a sprint. The finish is a good one, no crazy small streets for the GC men to worry about. They should move to the side and let the sprint trains fight for control. I would expect to see Deceuninck – Quick Step, Groupama – FDJ, Alpecin-Fenix and UAE looking to boss the closing kilometres. These sprint trains are quite evenly matched, I’m looking forward to seeing who comes out on top.

Fabio Jakobsen – his lead out of Štybar, Sénéchal and Van Lerberghe is good, but not as good as usual for the Wolf Pack. Two recent wins in the Tour de Wallonie has filled me with confidence, it’s great to see him back where he belongs. Unfortunately, he crashed two weeks ago in Heistse Pijl but says he was able to train properly afterwards. He’ll start the stage as the favourite, he’s the fastest sprinter here.

Arnaud Démare – he arrived at the Tour de France in great form, but he had a bit of a disaster. He’s not raced since, so he might be a little rusty in the first few stages. He’ll have Guarnieri and Sinkeldam in front of him, as usual, but Miles Scotson is not in position 4. Looking at their line-up that spot will probably be filled by Ludvigsson, they like having a big TT engine in at 4. He’ll expect to win, I’m not so sure.

Jasper Philipsen – he didn’t manage to get a win in the Tour de France, but he was very impressive finishing on the podium on six occasions. He’s here with a different sprint train but it’s still a good one. Like Démare he’s not raced since, making it hard to predict how he’ll go in this stage.

Juan Molano – the man in form, he took two impressive wins in Burgos. Confidence is massive for a sprinter and the Colombian will be full of it. I like the look of his sprint train too, he has Gibbons, Oliveira and Trentin to guide him in the closing kilometres. This is a great chance for him to win his first ever grand tour stage.

Jordi Meeus – wasn’t fast enough to win in Burgos, I doubt he’ll win this one.

Alberto Dainese – same as Meeus and his sprint train is almost non-existent.