We end with a time trial. 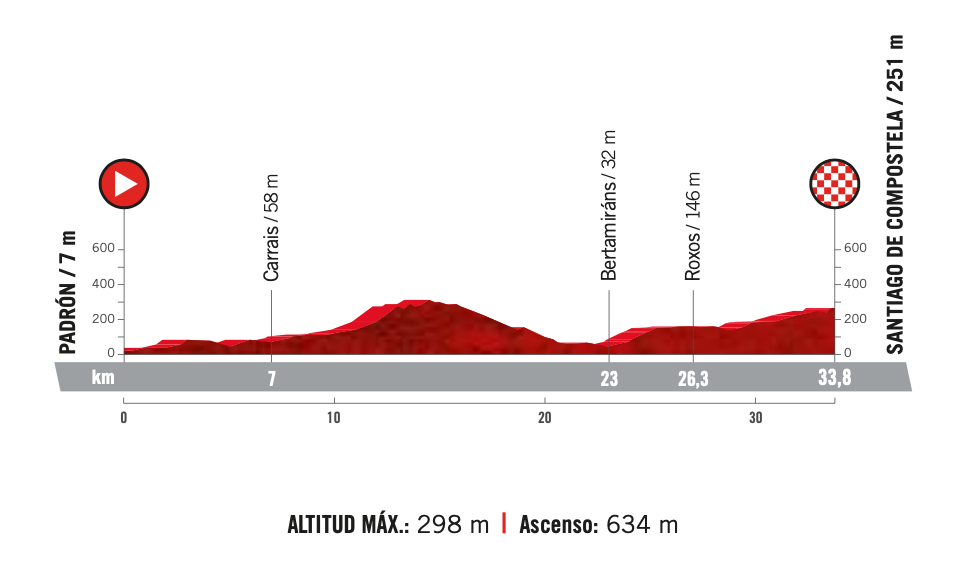 It’s been a brilliant Vuelta, one of the best in living memory. The race ends with a tricky 34km ITT. We don’t have any long climbs, but the route is full of short little ramps, making it very difficult for riders to settle into a rhythm.  We have 700m of climbing, which is quite a lot considering the distance. Given the amount of climbing it is a day that should suit the GC riders more than the TT specialists, but how much energy do they have left? They’ve been riding full gas, day after day, whereas the specialists have been able to rest up and save energy for this day.

It looks cloudy, but it should stay dry. The wind isn’t very strong and won’t have an impact on the race.

Primož Roglič – he looks like he’s got plenty left in the tank. Normally at the end of a grand tour Primož starts to lose some of his level, but I don’t think that’s happened this time. With three stage wins already in the bag you can bet he’ll be determined to try and land a fourth. He won’t take unnecessary risks, but he’ll still be going full gas.

Enric Mas – on his day he can deliver on his TT bike, but he is inconsistent. His second place on GC is secure, he’d love to round off the race with a top performance.

Josef Černy – he’s been so impressive in the past three weeks, playing a huge part in Jakobsen’s stage wins. He was 5th back in the opening TT, a result that will give him confidence for this stage. We do have a lot of climbing, which isn’t ideal for him, but he has the power required to post a challenging time.

Jan Tratnik – he’s got the big engine and he climbs better than most TT riders, this is a stage that suits him well. His TT results this season haven’t been as good as he would have hoped, but he was 3rd in Burgos. After riding hard for his teammates in the last week his chances will depend on how much energy he has left.

Nelson Oliveira – he usually shines in hard TTs, especially when others are getting tired. He’s crashed a few times in this race, hopefully he’s feeling good, and it doesn’t slow him down.

Tobias Ludvigsson – yes, he is at this race! The big Swede hasn’t been seen much in the past three weeks; has he been saving all his energy for this stage? On his day he can challenge in a stage like this, but I have no idea about current form.

Lawson Craddock – the same cannot be said for Craddock, he looked in brilliant shape on Friday. The American is a solid TT rider, he’s one who’ll like the look of the route. He’s unlikely to take the win, but he should be challenging for the top 10.

Magnus Cort – stage number 4? Given his form I wouldn’t write him off.

Chad Haga – the American is a bit of an expert in doing a good TT at the end of a grand tour, just think back to his incredible win in the 2019 Giro. I think he’s been carefully managing his efforts over the last three weeks, with this stage his big target. He’s a definite candidate for the podium.

He’ll round off a perfect race in style. A fourth win for Primož Roglič, with Mas and Haig rounding out the podium.