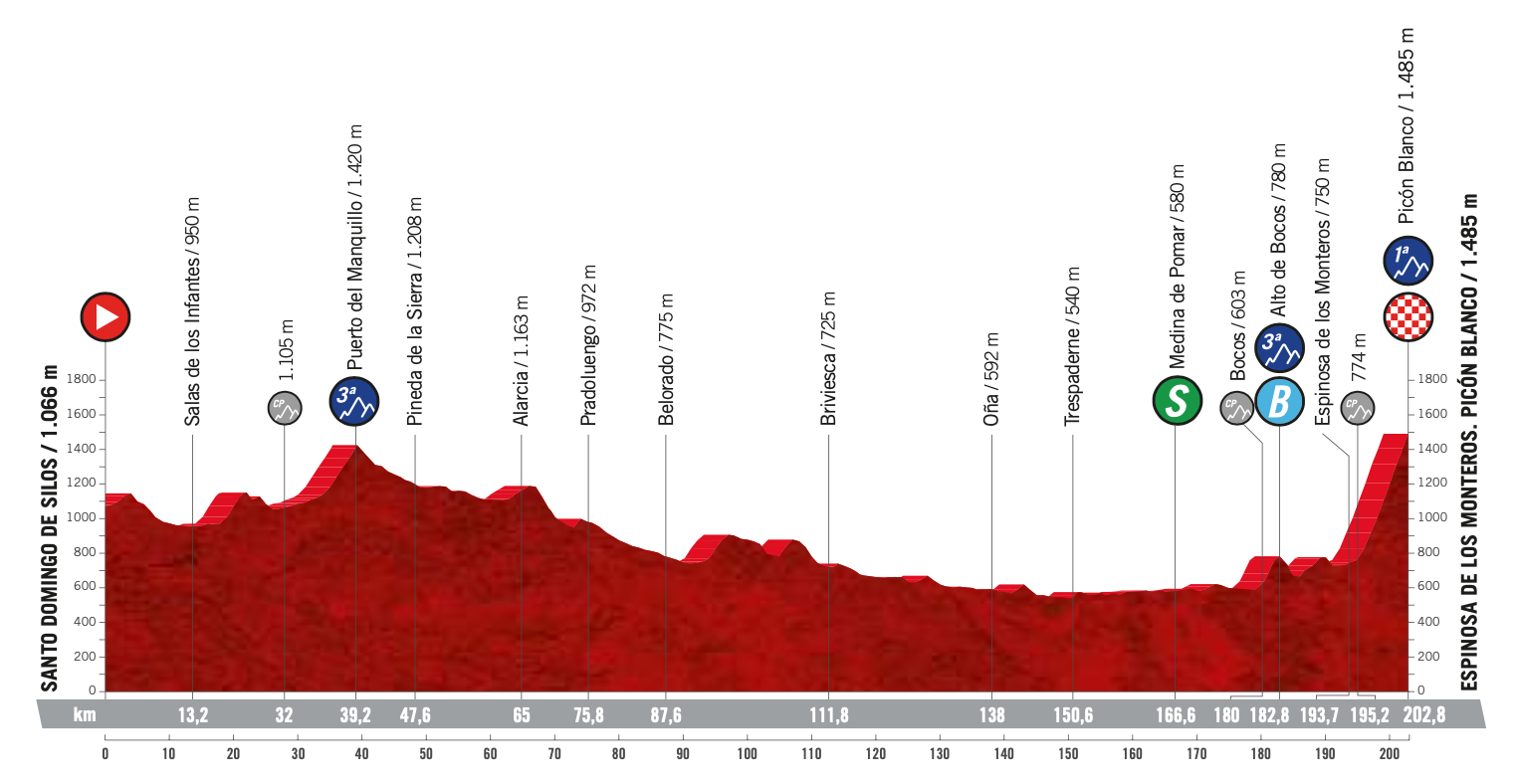 Flat stage, then bam! This is all about one big effort, it suits some riders better than others. Before we get to the climb riders will be worried about echelons, remember back to the 2020 Vuelta a Burgos, the race split before the climb.

Hot but nowhere near the heat of the last couple of days. The wind will be around 15km/h and will be a cross/headwind for much of the day, I don’t think we’ll see any echelons. Crucially we’ll have a headwind on the climb, making it tough to escape off the front.

Nothing fancy. A small break will get up the road and we’ll see a couple of teams looking to help Jumbo-Visma chase. The headwind will have a big impact on the type of climb we get, it increases the chances of a group sprinting it out for the win.

Bloody hard! We have 8.1km at 8.9% and very little “easy” sections for the riders to catch their breath.

Primož Roglič – this should be a good climb for him. The easy stage means he’ll have lots of domestiques who’ll be expected to hold the race together. Roglič can attack and put his rivals under pressure, but he can also wait for the sprint knowing that he’s probably the fastest here. I don’t think they’ll be any thoughts of trying to give the jersey away, he’ll be wanting another stage win.

Hugh Carthy – after winning on Lagunas de Neila he’ll approach this stage full of confidence. This is his type of climb, the steeper the better for the big man. He outclimbed Landa, Bernal and Yates just a week ago, but this time he has to get past Roglič. I don’t think he’ll be worried about this, he put Roglič to the sword on the Angliru last year. The problem for Hugh will be the headwind, if it’s strong it’ll be suicide to attack early.

Ineos – only they will know how they’ll approach this finish. With Yates, Bernal and Carapaz they certainly have lots of options, but will the headwind stop them from attacking? As I think Yates can win the red jersey I’ll obviously think he’s their best option for this stage, he does like a steep climb. Winning this stage will be hard, the headwind will do them no favours.

Miguel Ángel López – he won here in the 2018 Vuelta a Burgos, it’s a climb that suits him well. Movistar have not been hiding their aspirations for this race, they want to win the red jersey. The Colombian looks their best option, but Mas should also be challenging in this stage. We’ll have to see how they approach the finale, they aren’t known as tactical experts!

Mikel Landa – similar to López he’s also won on this mountain, it was the 2017 edition of Vuelta a Burgos. His form is still building, I doubt his level is good enough for him to win this stage.

Felix Großschartner – he usually performs at his best in Spain. He has a very fast finish, especially uphill, but so does Roglič! The austrian will hope to fly under the radar and surprise the bigger names.

Andrea Bagioli – the headwind is great news for the Italian. You might be slightly surprised to see his name in this section, but if you remember back to last year’s Vuelta, he was only just distanced in the opening mountain stages. I’ve previously described him as the new Kwiatkowski, if the headwind makes the climb a little slower he’ll be fighting for the win.

Romain Bardet – just last week he was first over the crest of this climb, winning the stage despite crashing on the descent. He suffered in the final stage due to the crash but his performance on Saturday suggests he’s fully recovered. He did 5.9w/kg when he won last week, he’ll need to do better than that to win this stage. His form is good and his confidence is high, he’ll hope to challenge for the win.

Giulio Ciccone – he came very close to winning a stage in the Giro, if he can find that form he’ll be confident of doing something special in this race. He has a very fast uphill sprint, he’ll be hoping the headwind holds the race together and he can sprint for the win.

After his performance in the TT it’s very hard to see past a win for Primož Roglič. Given the wind I think he’ll win a sprint from a relatively big group.