We might only have three categorised climbs, but this stage has the most climbing metres of any in the whole race. 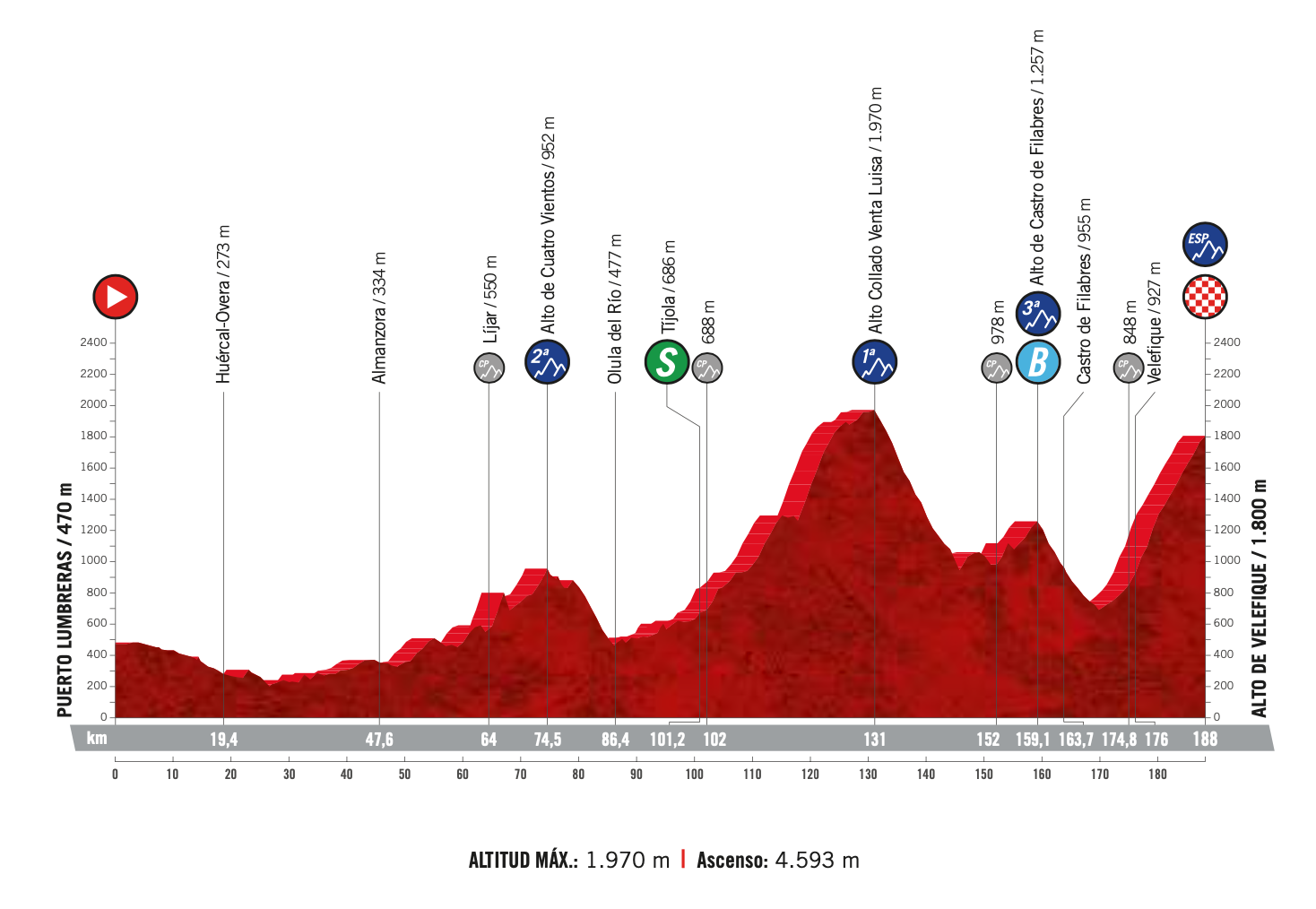 The start is a nightmare for climbers wanting to make the break, the opening 15km is downhill on a wide highway. This is one of these days where the early kilometres will be crazy, climbers will be hoping to sit in the wheel of a teammate and get dragged up the road. The break will likely take a while to establish, but it should go before the first categorised climb which comes after 70km. The composition of the break will determine if they succeed, it needs some quality climbers to hold off the pack on Alto de Velefique.

Another warm day, but temperatures won’t go above 30 degrees.

The cat 1 climb is officially 29km at 4.4%, but I’ve chosen to show you the hardest kilometres. This section of 4.6km at 9.3% is demanding and we still have another 8km of the climb to go.

Alto de Velefique has been used as a finish just once before, back in 2012 when Ryder Hesjedal won. It is the first especial climb in the race and is 13km at 7.1%. The hardest part of the climb is the first 5km, but the end of the climb does have lots of hairpin bends. We’ve had a tough opening week; we’ll see big gaps at the end of this climb.

Who wants to chase the break? Mountaintop finishes are usually better for the GC group, but the break did when on Picón Blanco. Jumbo-Visma are in control of the red jersey, but they don’t have to chase. The race is long, and the third week is incredibly difficult, the team need to watch the load they put on their domestiques. Primož already has a stage win, he doesn’t need his team to work on the front all day.

The pressure to chase will fall on the shoulders of Movistar, Ineos and Bahrain. So far, they’ve not been interested in doing this, but this stage is easy to control. Normally this would be a GC day, but we’ll have to see if teams are interested in chasing.

Once on the final climb we’ll see a tactical battle. Jumbo-Visma, Movistar and Ineos all have two men in the top 10 on GC, there’s no point simply waiting for Roglič to win the stage, they must attack from distance. Roglič didn’t have any teammates left in the last few kilometres on Picón Blanco, this will give the other teams hope, but he has looked in amazing form. As the start of the climb is very steep it’s perfect to put domestiques into difficulty, then the attacks will fly. If Kuss and Kruijswijk are in good form, then I think the result is inevitable.

Primož Roglič – he’s looked in sensational form, I don’t think he’s even broken sweat yet. This is a great chance for him to put real pressure on his rivals, he’d love a dominant performance to knock the stuffing out of them before the first rest day. He might find himself outnumbered towards the end of the stage, attacking could be his best form of defence. This is a great climb for Primož, he starts as the big favourite.

Enric Mas – he’s looked very strong this week; I think he’s the best Movistar option. They’ll still be reeling from Valverde’s crash, such a shame he had to abandon the race. After taking a while to get going this year Mas seems to be coming good at the right time, when he’s at his best he’s an incredible climber. Beating Roglič won’t be easy, but he’ll be confident in his chances.

Egan Bernal – he said that he’s not at his best, but he’s still been able to follow the big moves. This will be a big test for him, if he finishes in the front group then he’ll be one of the men challenging for the red jersey. Having Carapaz and Yates as attacking options is good for him, it means he can sit in the group and follow the moves, we’ll then see if he has the level required to attack and go for the win.

Adam Yates – the man who’s animated the mountain stages with attacking riding. Yates looks very keen on taking back some of the time he lost in the opening stages, but he’s been unable to shake off Movistar and Roglič. Despite not being able to get away his form is clearly good and as he sits a little down on GC, he might just get a little freedom in the closing stages.

Mikel Landa – he’s not looked at this best, losing 33 seconds on Balcón de Alicante. That is a climb Landa would normally like, it’s a sign that his legs aren’t there. Bahrain should now be thinking about changing how they are racing, freedom should be given to Jack Haig, he looks in good form.

DSM – breakaway hopefuls number 4, 5, 6 and 7! All of a sudden, they seem to have their mojo back. With no interest in the GC, they’ll be fighting for the morning break, and will hope to get multiple men in the move. Bardet, Storer, Arensman and Hamilton are all great options for this stage.

Someone will chase, surely! When the dust settles, we’ll see an inevitable win for Primož Roglič.