Get ready for an intense day. 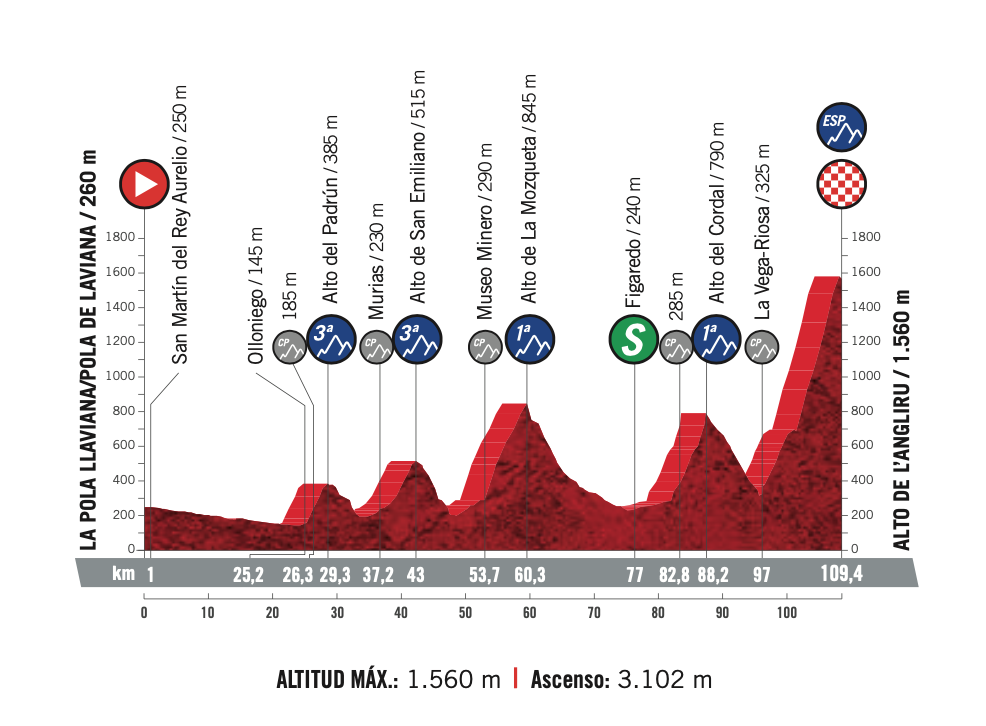 Just 109km in length, but features two cat 3s, two cat 1s and the Angliru to finish off. This is one hell of a day.

Alto del Cordal is a horrible looking little climb. It is 5.4km at 9.3%, but take a look at the final kilometre, it rarely drops below 10%. A short descent follows before we get to the big one, but this climb means the bunch will already be small at the foot of the Angliru.

Alto de l’Angliru, one of cycling’s hardest climbs. It is 12.4km at 9.9%, but that includes a relatively easy start. The final 6km averages around 13.5%, words don’t do it justice. We’ve seen some of the best riders in the world come to a complete stop on this mountain, it is that hard.

Cloudy with a chance of rain. The wind is fairly strong and coming from the south-west, which unfortunately means a head wind on the Angliru.

The last time we were here was in 2017, when Contador took the win from Poels and Froome. In 2013, Elissonde won from the break, with Horner finishing in second. Cobo “won” in 2011, but Poels has that stage as the Spaniard was doping. In 2008 it was another day for Alberto Contador, he really did love this climb. The history books show that Wout Poels normally goes very well here.

Short stages can be won by the break, but only if it’s full of strong riders. The issue is where do they build their advantage? There really isn’t a lot of time for them to firstly form the break, and then get the advantage they’ll need for the final climb. It doesn’t look like a day for the attackers, but you cannot completely rule it out.

It should all be about the last two climbs. Movistar did well today, unfortunately Soler couldn’t take his second stage win. They now have three riders sitting within four minutes of the red jersey, which is a very strong position to be in. The problem is that none of their riders are stronger than Roglič, Carapaz and co. You know what that means? They go for it on the Cordal. It could be Soler, Valverde, or both, but they will attack. They have to get riders ahead of the GC group if they want to win the stage. Mas will then get to follow wheels, that isn’t easy on the Angliru, but it has to be their only option.

Jumbo-Visma have the strongest team in the race, I cannot see the others putting them under a lot of pressure. They will dictate the race, but I do hope Carapaz attacks from far out. Having domestiques doesn’t really matter far up this climb, it’s all about the legs. You would normally say that a small climber like Carapaz would be the favourite on a climb so steep, but Roglič looks incredibly strong just now and starts as the man to beat.

Primož Roglič – three wins and the red jersey, it’s been some race for the Slovenian. This stage is a huge moment in the battle for red, but with a long TT on Tuesday, Roglič doesn’t have to chase the win. He will ride a sensible race, following the wheel of Carapaz, making him use up vital energy. Once into the final kilometres, he will go for the stage if it is still all to play for.

Richard Carapaz – the pressure is on his shoulders. With Roglič watching his every move, it’s going to be very hard to get a gap. It’s a real shame that his team isn’t strong enough to make the stage hard, can they send Rohan Dennis over for this day? He will hope that he can get the better of Roglič in the closing kilometres, as the climb does suit his characteristics.

Hugh Carthy – the big man is still sitting in a great position. With the podium still a realistic ambition, he needs to hang tough on this climb. He goes well on tough climbs; this is a stage that will go a long way in deciding if he can finish in the top 3. We’ll have to see how he approaches the final climb, he usually likes to attack, but it might be better to hold back given how hard the climb is.

Dan Martin – normally I would think this is too hard for him, but he is looking strong. He’ll hope that Roglič and Carapaz look at each other, allowing him to slip up the road. This is unlikely.

Wout Poels – as I’ve already pointed out, this is a climb he does well on. He’s far enough down on Roglič not to be considered a threat, there is a chance he can get away and challenge for the win.

Aleksandr Vlasov – we’ve seen him improve throughout the race. Vlasov is 6:47 down to Roglič, which guarantees freedom, but will he have the legs to distance the best?

Sep Kuss – in my humble opinion, I think he’s the best here on steep slopes. The problem is that he’ll likely have to ride for Roglič, but that’s what pays the wages!

This really is a brutal climb, the winner must be a great climber. I think we’ll see a GC day and Aleksandr Vlasov will get away once the favourites look at each other. I think Roglič will take some time on the rest, but not a huge amount.