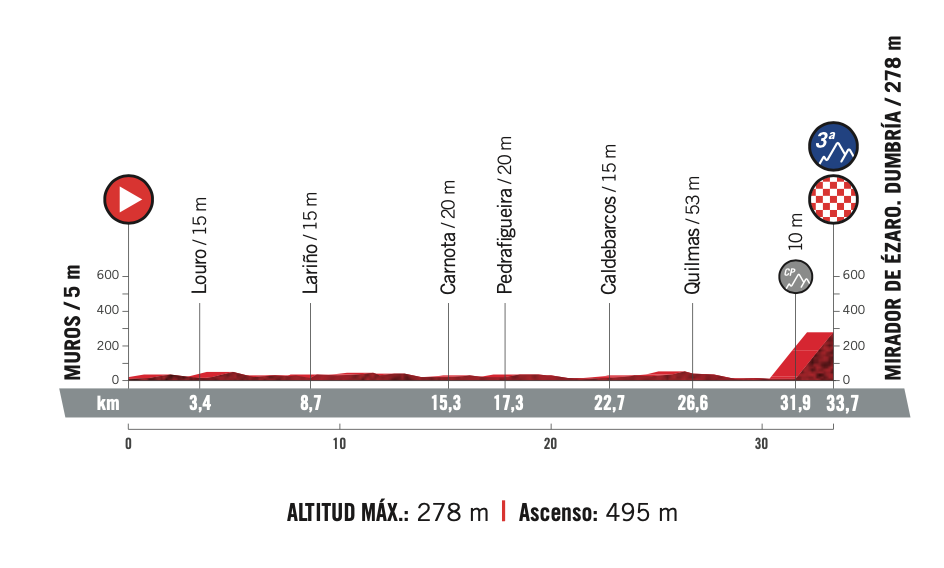 We have 31.5km of relatively flat roads, followed by a climb that’s hard to walk up. Got to love the Vuelta.

1.8km at 14.1% and it’s harder than the numbers suggest, if that’s even possible. Despite the severity of the climb, the stage will likely be decided on the flat. The GC contenders will also need to think long and hard about changing bike. The climb is very difficult, but even harder on a TT bike. The problem is the climb will only take the best around 7 or 8 minutes, which means changing bikes might not be worth it.

The roads should stay dry for the all stage, but there will be a fairly strong headwind for the majority of the run. This will make it even harder for some of the little climbers.

Primož Roglič – this is his chance to get some redemption. I’m sure we all remember his face, helmet not sitting properly, at the end of the Tour de France TT. This is his chance to put those ghosts to bed and remind everyone just how good he is against the clock. With just one mountain stage left in the race, he knows a convincing performance will all but seal the red jersey. He’ll expect to put more than one minute into all his GC rivals, and take the stage in the process.

Remi Cavagna – the French TT champion will like the look of this one. He has looked impressive throughout the race even though he was a last-minute replacement for Shane Archbold. He has buckets of power; he should be able to fly on the flat and get to the climb with a good time. Once on the hill, he’ll have to use all his grunt to limit his losses to the lighter guys.

Nelson Oliveira – after a brilliant performance on Saturday, he has to start this stage as one of the favourites. The Portuguese domestique usually saves his best rides for tough TTs and this is certainly that. It’s unlikely he’ll win, but he’ll hope to be challenging for the podium.

Ion Izagirre – already has a stage win in this race, but he wouldn’t mind another. As the last week doesn’t look ideal for him, Izagirre will surely go flat out in this stage. He’s powerful on the flat and copes very well with steep gradients, he has a chance of surprising some of specialists.

Jannick Steimle – the QuickStep youngster is one I’ve got my eye on. He’ll find the climb very hard, but he should be challenging for the top 5-10.

Enric Mas – the Spaniard has a fairly good record in grand tour TTs. He will sense a chance of putting pressure on Dan Martin and hopefully moving into fourth spot on GC. Mas has impressed me in this race, his performance on Sunday was excellent. If he can limit his losses on the flat section, he has a chance of squeezing into the top five on the day.

Hugh Carthy – what a chance to move into second on GC. Hugh sits 35 seconds behind Carapaz, he can easily make this time up, and some more. Hugh is a solid TT rider, it’s a discipline he can do well in. Given his current form, I expect a top 10 performance from him, and to move comfortably into second place on GC.

It’s got to be Primož Roglič. I think he’ll do a huge ride and all but claim the red jersey.