This concludes a run of three stages that really suit the breakaway riders. 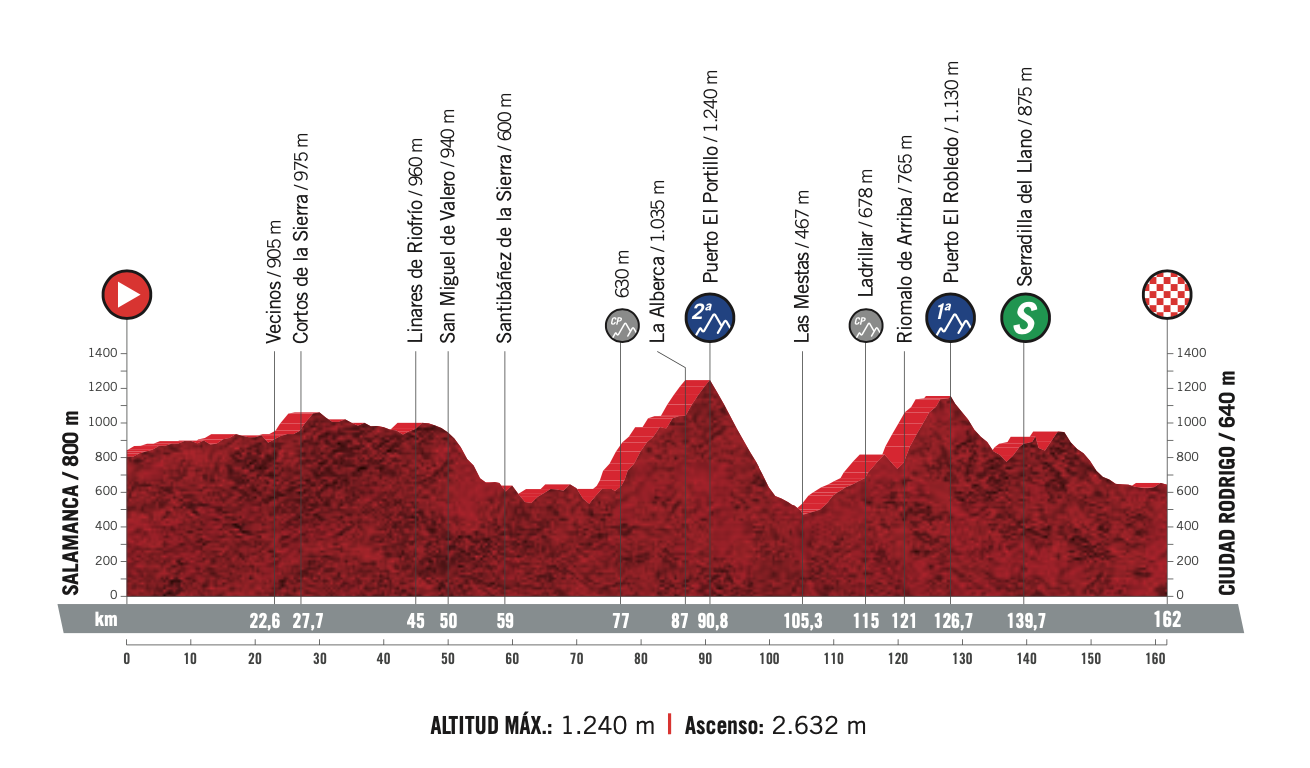 The weird thing is, despite a cat 1 climb, this one could end in a sprint. The two climbs have been massively overestimated, which is most unlike the Vuelta organisers, they usually go the other way.

14.8km at 4.3%, which is long, but relatively steady. The descent is very technical, it has 10 hairpin bends. Movistar will like this.

The whole climb might be fairly easy, but this is a tough section. The climb crests with 35km to go.

Lots of cloud, and there could be some rain too. This isn’t a big issue, but the wind is. We have a constant wind of 50km/h, gusting up to 70km/h. Coming from the south-east means that the start of the stage is a cross/headwind. What a disaster for some of the GC men.

I don’t want to jinx this, but the opening 20km is full on crosswind, in a very exposed part of the world.

Then we have 20km of cross/headwind, and it’s still fairly exposed. This section does have some protection from the wind, but there are still lots of potential echelon areas.

After 45km, the echelons are no more. We have a large section covered by trees, and the final 60km is mainly a strong tailwind. Some GC riders will be very nervous heading to the start line, no doubt they’ll be frantically checking various weather apps.

It all depends on the wind. It if blows, we will see huge splits at the start of the race. It will then be up to teams to see if they can keep it going for the rest of the day. The two climbs in the middle of the stage is great news for those who would like to push on, it will hurt the domestiques and those caught behind will not get back on. I’m nervous just thinking about.

Which team will try something? That has to be Movistar. They have tried to take advantage of every half chance in previous stages, this is a full chance! The rest of the GC riders look a little vulnerable to me. Even if it doesn’t work, it means that some riders will head into the final mountain stage with sore legs. This could be an unexpected big day in the battle for the red jersey.

If we don’t get echelons, then it’s a classic breakaway v sprinter stage. We might have a cat 2 and cat 1 climb, but these are massively overrated if you ask me. 2600m of climbing is well withing the capabilities of most quick men, but coming at the end of a grand tour, a stage like this would normally be a breakaway day. I have a feeling it all depends on the wind, and what happens in the first 40km.

After a demanding stage today, some riders will be starting to feel it. When they hear that we have potential crosswinds, I’m sure a lot of heads will go down. Who still has the legs to deal with this day? Forget about the mountain stage on Saturday, this is an enormous day in the battle for red.

Some little rises inside the final 2km, and a big corner with 500 to go. If we get a sprint, the final turn will be crucial.

Alejandro Valverde – the crafty old bugger is far from being at his best, but he’ll be up the front if the wind blows.

QuickStep – usually the best in the wind, but if they make the first echelon, the vast majority of their team will get dropped on the climbs. If we don’t see echelons, it’s a good-looking stage for Cavagna, Cattaneo and Bagioli. The Italian is one who has impressed in the last few days, but the flat finish isn’t good news for him.

Primož Roglič – if it turns into a GC day, then why not? The Slovenian isn’t known for being great in the wind, as he can sometimes lack the positional sense required, but this is an area he has improved recently. The presence of Paul Martens is going to be crucial for Roglič, he has the experience required for a start like this.

A Portuguese rider – another stage that ends close to the border, which will interest the locals.

It’s the combination of early crosswinds, followed by climbs, which will make this stage a GC day. We’ll get moves from the gun, and the peloton will explode early. Cast your mind back to what QuickStep did last year, I see something similar happening here.

Looking at the GC teams, only Movistar seem strong enough to try something. The likes of Valverde, Erviti, Oliveira and Rojas are perfect to help guide Mas into the front echelon. Then they’ll look around, see who’s made the split, and push on. After the crosswind section, there is only 20km until the climbing starts. If you haven’t made the front split, it’s going to be very difficult to get back in.

I’ll be bold and say that Movistar will attack from the gun and split the race. They’ll have numbers in the front group and Alejandro Valverde will take the win, with Mas moving up on GC. We’ll have to see who loses time, but I expect a few riders in the top 10 to have a bad day.