Day two, and another mountain stage. God bless the Vuelta! 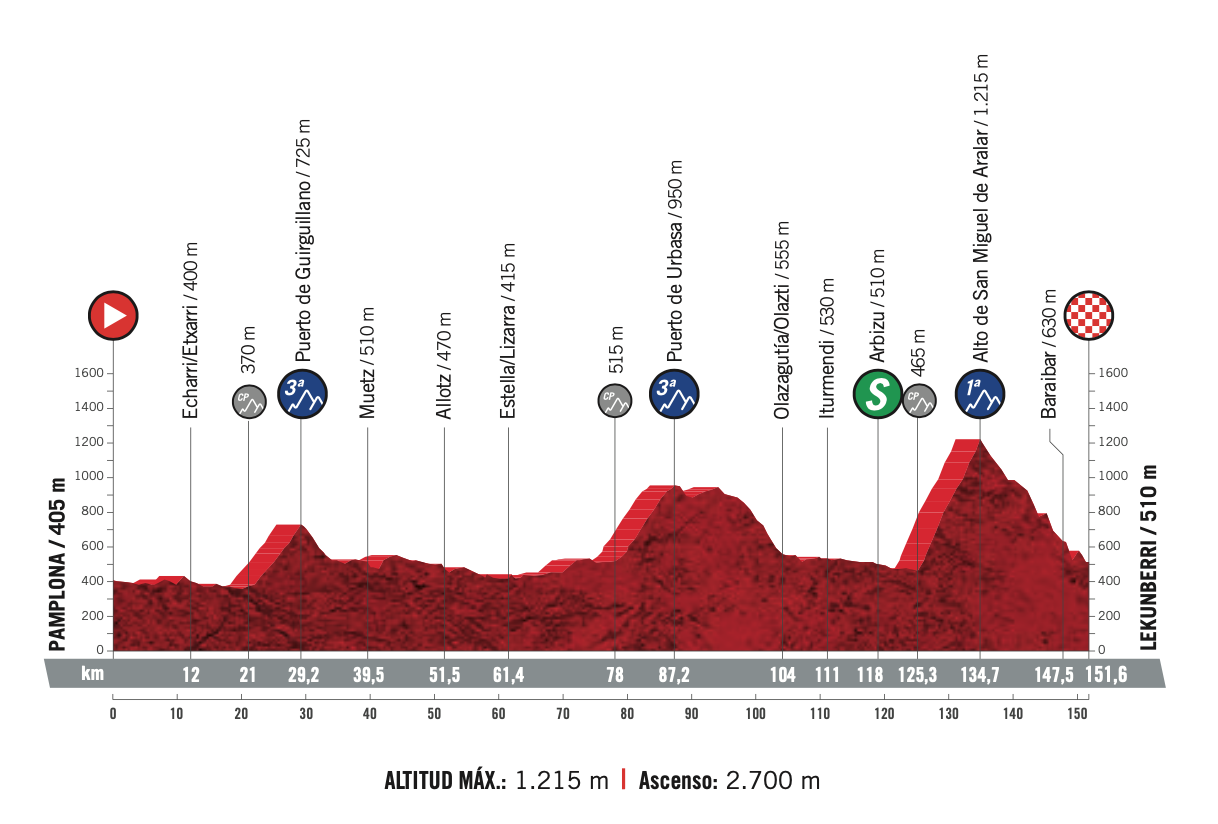 The day is centred around the San Miguel climb, it is a beauty.

Last time the race was here it was back in 2014 and Fabio Aru took the stage. The climb is on that horrible concrete, which is popular in Spain, which makes it even harder than normal. That day it finished at the top of the climb, with a small group fighting out the win. This is a hill where the cream will rise to the top, thanks to the fact it’s 9.4km at 7.7%.

This year the climb crests with 17km to go, which normally means the pace is slightly slower than if the race finished at the top. The descent isn’t over technical, but it is very fast and mostly on a narrow road with trees casting shadows, which makes judging corners very difficult.

Lots of sunshine, and quite a lot of wind. Just like today, it is coming from the south, but I don’t think it will cause any damage. Most of the route is well protected from the elements, and we’ll have a lot of tailwind throughout the stage. We do have a couple of sections that are exposed, so teams will need to be on their guard.

The lack of a mountaintop finish normally swings the advantage over to the breakaway, but as we are so early in the race, that swings the advantage back to the GC group. The start of the day is flat, but we do have two small kickers at km 6 and 10, which could allow puncheurs to make the move. We also have a cat 3 climb after 20km. So early in a grand tour usually sees a small group of pro-conti riders move off the front, without a fight, but I’m not so sure about this stage. Some riders will sense a chance of going all the way to the finish, if the riders in the peloton look at each other.

Jumbo-Visma are in control of the red jersey, but will they control the break? After today’s stage, only 48 riders are 6 minutes of Roglič, which means a lot of riders will have freedom to go for the stage win. Jumbo-Visma will be very watchful at the start of the stage, they won’t be happy letting dangerous climbers back into the GC fight.

When the break goes, will anyone chase it? Jumbo-Visma certainly don’t have to, but Ineos might. Carapaz looked strong today, but he wouldn’t be the favourite for this stage due to the flat finish. It will be interesting to see if anyone takes up the pace, I sense they might not.

Once on the San Miguel climb, expect to see Jumbo-Visma do their usual thing. They have 5 riders in the top 16, that is hugely impressive if you ask me. They will get the mountain train working on the front, ensuring we don’t see any attacks. They’ll gradually increase the pace, but ensure they have two riders left to support Roglič on the downhill. Once over the crest, they’ll look around and assess the damage. After such a strong start to the race, the pressure is off. The final 17km is great for Roglič, he is the best descender of the GC riders and has the fastest sprint.

Omar Fraile – Astana had a shocker today, with Vlasov and Ion Izagirre losing significant time. This means the team should be looking to get involved in the breakaways. The little kickers in the opening 10km are good for Fraile to make the move, remember he used to be a breakaway expert. He knows the area well, and will have climbed San Miguel on a number of occasions. If he makes the move he’ll be a hard man to beat.

Robert Stannard – the Aussie youngster has bags of potential. It’s taken him some time to find his way in the professional peloton, but we are now starting to see the rider who dominated the under 23 scene a number of years ago.

Michael Woods – lost lots of time today, due to an unfortunate crash. As he didn’t look badly hurt, it means he should be looking to jump in this break. Not riding for GC is better for him, I enjoy watching him hunt stages.

Nans Peters – after his success in the Tour de France, he must be included in this section. It would be incredible if he completed a grand tour hattrick at such a young age.

Simon Geschke – another quality rider who lost lots of time today. The German is a very strong climber and will surely be looking to chase some stage wins. The battle for the break should be fierce, he has the experience to know when to attack.

Santiago Buitrago – I’ve been impressed by the Colombian youngster this season. He’s still just 21, I see a promising future ahead. He’s a rider who enjoys the mountains, and packs a fine punch. It would be good to see him make the morning move.

Primož Roglič – if it comes back together, it’s hard to see him not winning. Jumbo-Visma tried to allow Kuss to win today, but Carapaz chased him down. Now that the hierarchy has been set, they’ll be all in for Roglič, and he looks unstoppable just now. As I mentioned in my stage 1 preview, I love how he’s bounced back from his disappointment in France.

Hugh Carthy – what a ride by big Hugh today, such a shame Enric Mas decided to chase him down and deny him the stage win. Hugh lived in the north of Spain for many years, this is a climb he used to train on. Knowing every inch of the mountain will be a big help, but Jumbo-Visma won’t be giving him any freedom. Now that he’s the undisputed leader of EF(something which doesn’t happen enough) just you watch him fly! He was close to big things at last year’s Giro, I think we’re going to see some special results over the coming weeks.

Everything points to a day for the breakaway, unless a rider who is close on GC slips into it. As you all know, predicting a breakaway winner is incredibly difficult, but my success rate isn’t too bad! I’ll take a win for Omar Fraile. Back in the GC group, I don’t see gaps between the best riders.