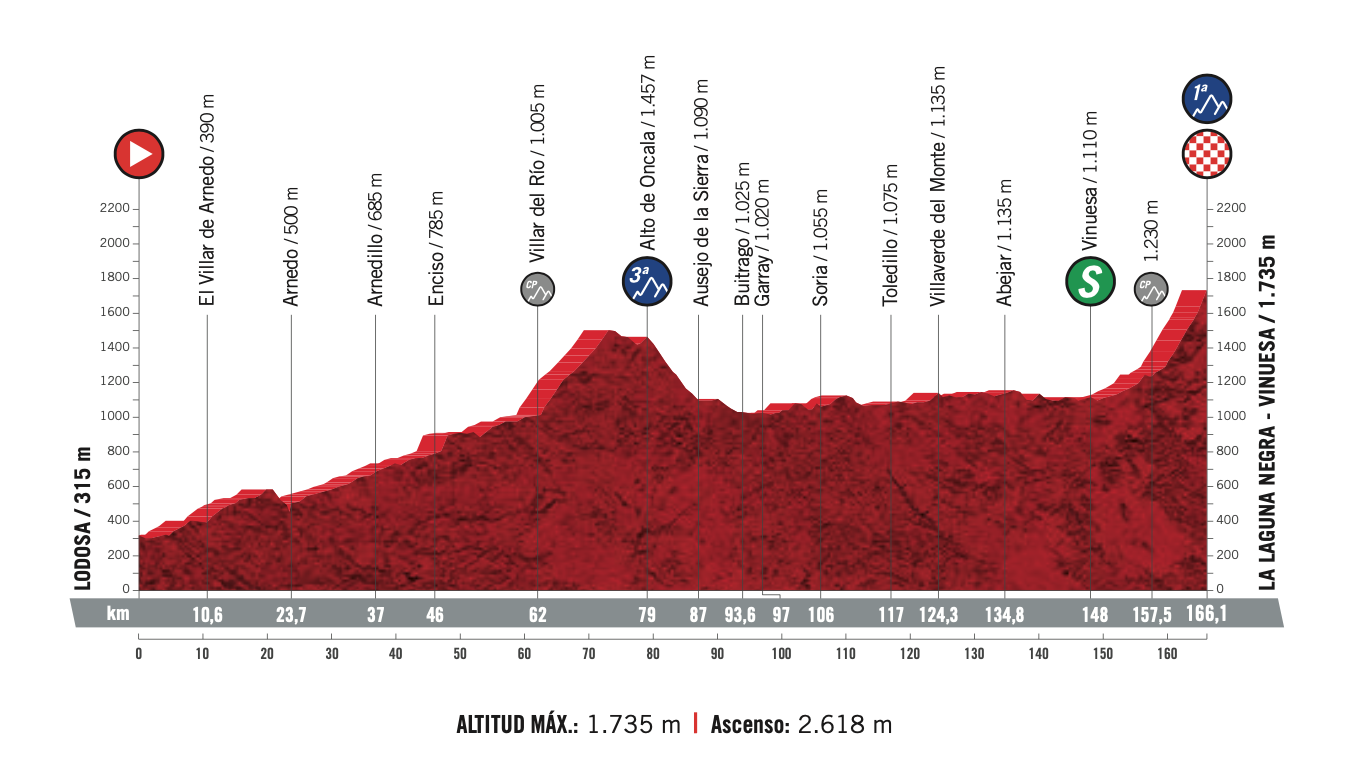 A day that looks pretty boring, but there are two things that could liven up proceedings.

A little bit rainy, and a strong wind coming from the south. We’re talking about a consistent wind of 37km/h, with gusts up to 53km/h.

As you can see, as the riders head west from Soria, we have crosswinds. The good news for the little climbers is that their left-hand side is fairly well guarded by a big hill for most of this road. We do have some exposed sections, so the GC teams will need to be careful about their positioning.

With only 23 men still involved in the GC fight, every stage will attract a lot of attention from potential breakaway riders. Today we saw Jumbo-Visma not interested in chasing the break, but Movistar were. Now with a stage win, will the Spanish team be interested in chasing all day when Roglič is the big favourite for the stage? That wouldn’t make any sense to me, but this is Movistar! Ineos could chase, as Carapaz looks in good form and this is a good finish for him.

The flat start isn’t great for climbers wanting to make the move, this is more a stage for puncheurs to get in the move. One issue is the headwind the riders will face for the majority of the opening 125km, that isn’t great news for the breakaway riders.

GC teams need to be careful about potential crosswinds, but I don’t think this will be a major issue. The final climb is relatively straightforward, we should see a bigger group come to the line together, compared to previous days. Movistar will be happy to control the pace; they will hope Valverde can roll back the years.

Primož Roglič – he’ll love the look of the final 500m. Roglič is brilliant on steep slopes, and he clearly has the best sprint of the GC riders. Jumbo-Visma will have plenty of riders to control the final climb, especially after an easy day in the saddle. If the break is caught, Roglič will start as the overwhelming favourite.

Alejandro Valverde – it was good to see him survive in the front group today, it’s been a while. I suspect that Valverde will improve throughout the race, but this stage is maybe too soon for him. He still has the legs to be competitive, but beating Roglič looks beyond him.

Dan Martin – another rider who gets better when the gradient goes over 10%. He’s started the race in great form, and he has the punch required to win this stage. One problem is his positioning, especially as his team don’t have men who’ll survive the climb with him.

Richard Carapaz – expect him to try something before the sprint, it’s his best chance of success. I liked his attack today, it showed creativity.

Andrea Bagioli – as I’ve mentioned before, Bagioli was described to me as the new Kwiatkowski. This is a finish that is well within his capabilities, the final climb isn’t that long or difficult. The Italian possess a kick that most can’t respond to, he is a massive threat for this stage.

David Gaudu – he’s another who should improve as the race goes on. He loves steep slopes, and as the stage is easy, he should be able to survive in the front group. Winning against riders who are clearly in form will be difficult, but not impossible.

I’m not too sure who’s going to chase the break. Jumbo-Visma won’t, it would be foolish of Movistar to do so, but I still think they will! Looking at the final climb, one name jumps out at me and it’s not who you think it is. This is a day for Andrea Bagioli, remember the name.