At last, a boring sprint stage.

The quick men have been looking forward to this one.

Sunny, but not very warm. There will be a 20km/h wind coming from the west.

This part of the world is renowned for being exposed to the wind, but the wind might not be strong enough to cause any problems. At km 110, the road starts to head north, so we have crosswind from the left, and the road is mostly exposed. We have a short section where the peloton head east, before 20km of cross/tailwind when they turn south-east. This isn’t good news for some of the GC riders, teams will try and split the bunch, but the wind speed might not be enough. 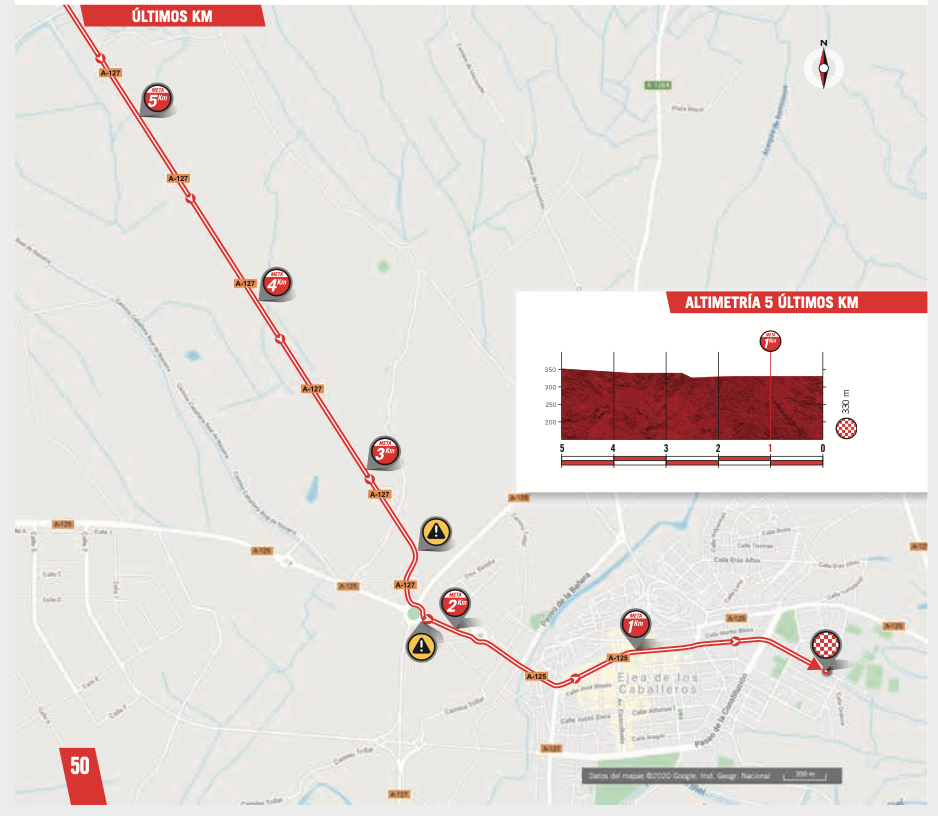 Arrow straight from 20km to go, until 2km. At this point the bunch go through a roundabout, the road book indicates that just the left-hand side will be open. This will naturally get them in a thin line, before we hit the town centre streets. A mere 300m after this roundabout comes another, this time it’s the right-hand side which is open. It will still be single file at this point, but once through this it is possible to move up a little, but having a good position with 2km to go is very important.

Sam Bennett – he doesn’t arrive with a full sprint train, but he’ll have Štybar and Mørkøv to help guide him in the closing kilometres. If the wind does blow, he’ll also have Steimle and Cavagna to help protect him and force some splits. Bennett has enjoyed a great season, and he has a good history at this race, he’ll start this stage full of confidence.

Pascal Ackermann – the German arrives with his usual lead out men, Schwarzmann and Selig. His season has been a bit hit and miss; he’s not managed to consistently hit the level expected of him. This race has always been his big target, he should be at his very best over the next couple of weeks. His sprint train isn’t long, but Selig is very experienced and does the job of two men. If the wind blows, he should be able to stay in the front group.

Jasper Philipsen – he won’t have much help if we get wind, his team has lots of climbers, not rouleurs. His current form is good, he won the opening stage of the Binck Bank Tour. His lead out train features a lot of young riders, it really does lack the experience that QuickStep, and Bora have. Philipsen will start his sprint from behind Ackermann and Bennett, which will make winning very difficult.

Gerben Thijssen – the young Belgian should be Lotto’s sprinter. If the wind does pick up, having seven Belgians in the team would normally be a big help. With only twelve race days in his legs this year, he’ll probably be a little under cooked, but he might be able to surprise.

Matteo Moschetti – after a terrible crash back in Bessèges I’m amazed he made it back this year. The young Italian is a very fast sprinter, but he’s still recovering from his injury and hasn’t yet reached his pre-crash level. If the wind blows, he won’t make the front split, I don’t think he has the legs for that. If we get an easy day, he’ll be in the mix fighting for the win.

Jakub Mareczko – will he ever take a world tour victory? He has an amazing 43 pro wins to his name, but never at a high-ranking event. I don’t see this changing.

I don’t think the wind is going to be strong enough for echelons, it should be a mass sprint. This should be close between the big two, I’ll go for Sam Bennett to continue his impressive season.