I’m not too sure what to make of this stage. 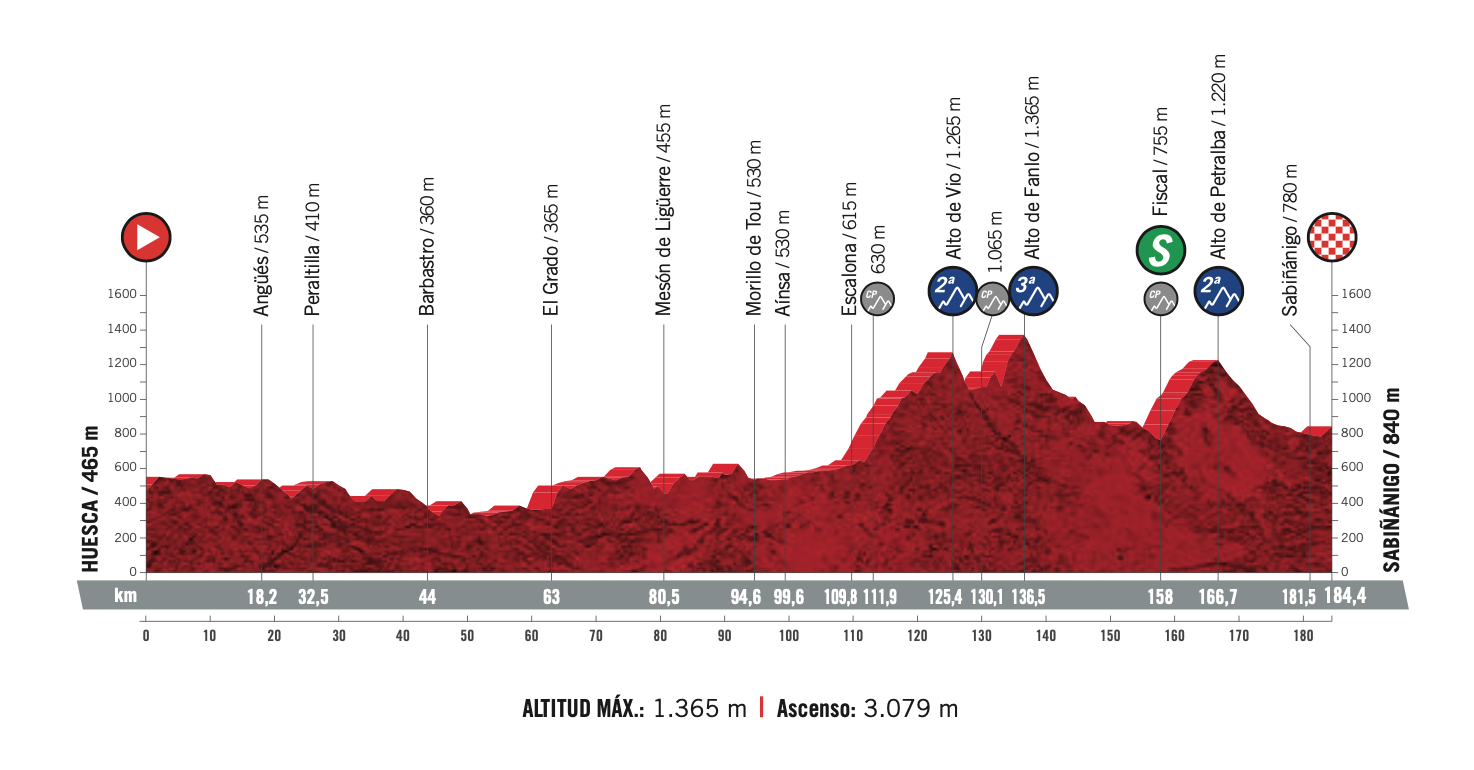 With three climbs packed into a 50km section of racing, it should be too hard for the fast men, but it depends on how the climbs are ridden. This is a stage that will interest breakaway riders, but also puncheurs with a fast finish.

Another cracking looking day for a bike ride.

Alto de Vio is officially classified as 13.5km at 4.7%. The whole climb is done on a very narrow road, which usually makes life harder for the quick men. After a descent of only 2km, we bounce straight into the next climb.

Alto de Petralba is a funny climb, totally different from the first two climbs of the day. Officially it is 8.7km at 5.2%, but the opening 5km is at 6.7% and on a wide highway, the rest of the climb is in a tunnel, I hope we see the attacks! The crest comes with 20km to go, but don’t underestimate the finish.

The final 300m averages 6.2%, it is a nasty little kicker. With a maximum of gradient of close to 10%, you better not go too early.

It’s very unlikely we’ll see QuickStep or Bora look to control this stage, I don’t see Bennett and Ackermann making it over the hills. The stage isn’t hard enough for the GC riders, so who will take responsibility to chase the break? Movistar seem the obvious choice, they could see a chance of setting up a potential win for Valverde. There are a few other riders who will make the finish and pack a punch, but will their team ride all day on the front?

Alejandro Valverde – apart from when he was banned, Valverde has won a race in every year since 2003, but he doesn’t have one this year. If this was a couple of years ago, Movistar would take control of this stage from the very beginning. The little ramp at the end is great for the former world champion, but he’s not looked his usual self for a while now. It would be a big statement by Movistar, but I don’t think they’ll do it.

Andrea Bagioli – I picked the QuickStep youngster on Thursday, but the climb was too hard for him, this stage certainly isn’t. He packs a very fast sprint, particularly if the road kicks up a little. Will QuickStep control the break? I’m not too sure, but the finish is very good for Bagioli.

Jon Aberasturi – can he hang tough on the final climb? If so, he has a very fast sprint. If Caja-Rural take a stage win, there will be many happy cycling fans out there.

Rui Costa – now we reach a long list of riders who could win from the breakaway, or from the peloton. His form has been okay in recent months, but not amazing. UAE have a team full of attacking options, Costa is one of them, but he normally doesn’t work well in breakaways.

Alex Aranburu – very fast sprint, especially going up a small hill. Aranburu has already been in a break this week, if he made this one he’d be a very hard man to beat.

Luis León Sánchez – he’s looking in great form, but Astana have so many options for this stage. Given the riders at their disposal, they must have a big say in the outcome of this stage. A win for the Spanish champion would be very popular.

Dion Smith – current form is very good, his win Coppa Sabatini was very impressive. The Kiwi loves a stage with some kickers thrown in, and this is exactly that. Mitchelton-Scott have a few options for this one, Smith could win from the break or the main peloton. Like many riders, he’ll be carefully watching the opening kilometres of the race, before deciding what to do.

Magnus Cort – there are so many riders in this race who can handle hills and pack a fast sprint. Cort is classy rider, and when he gets in a good position, he rarely misses out.

Tim Wellens – was in the break in the opening two stages, he’ll be looking to get in this move. His form isn’t great, but he should improve with every stage in his legs. Wellens is a great rider to watch, I love his attacking flair.

I don’t see this break getting chased, unless there is a GC threat contained within, Jumbo-Visma don’t want to give away the red jersey. I’ll roll the dice and go for Luis León Sánchez.