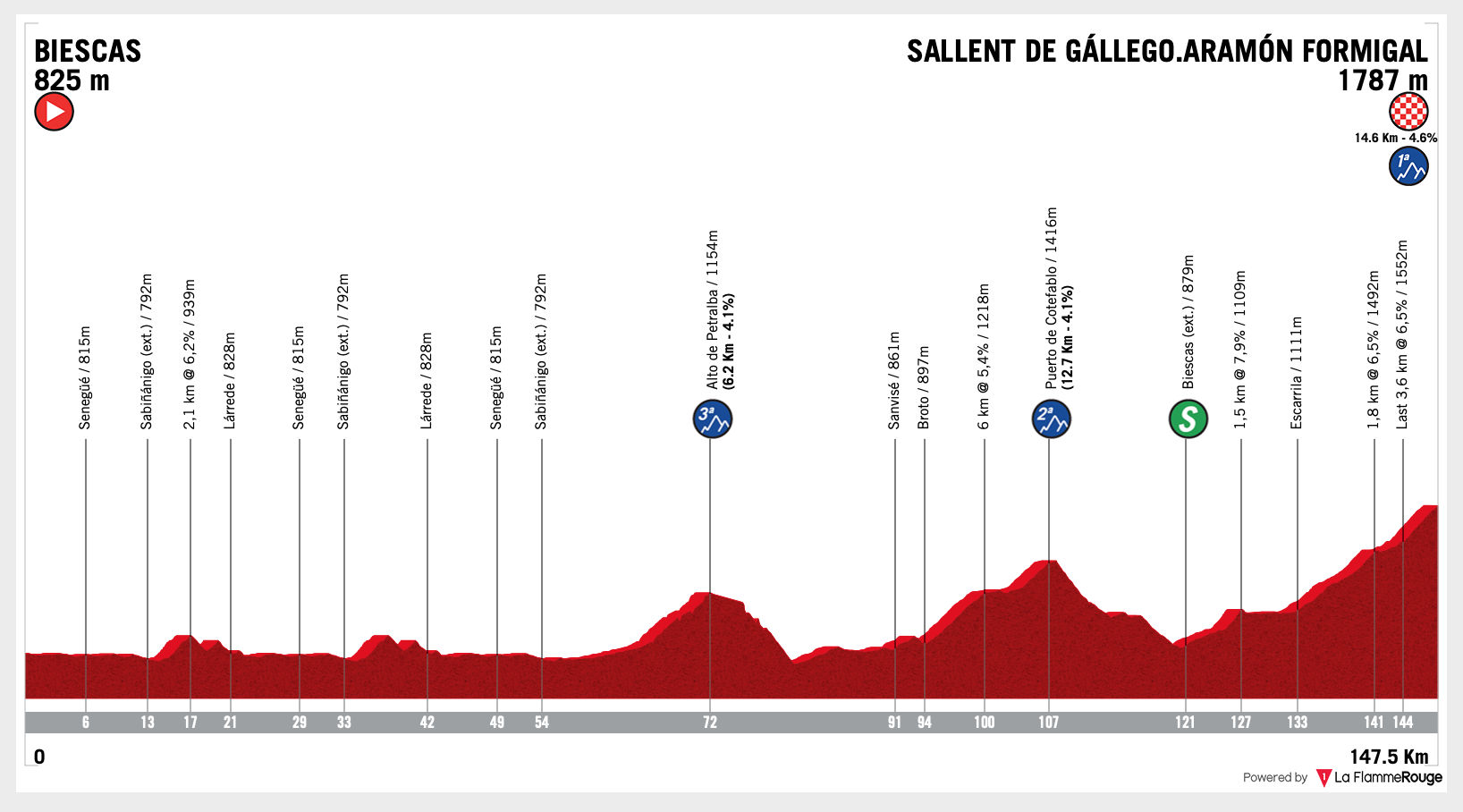 France has denied the race access, so out goes the big mountain stage that was planned, but the organisers had something up their sleeve.

This is a re-run of that famous stage back in 2016 when Team Sky, and Chris Froome, got their trousers taken down and bottoms smacked. One of the most amazing stages in recent history, I wonder if we could get something similar this time round?

This stage is a little longer than that day, but it does feature the same three climbs. The profile doesn’t suggest any real difficulty, but because of the history of this stage teams will be wary of relaxing. In theory, nothing should happen until the final climb.

It’s long and gradual, the gradients won’t scare any of the top riders. So far in this race teams have been keen on hitting the climbs as hard as possible, I think this will continue in this stage. That means despite the climb not looking that hard, it will be selective, but I think we should see a larger group approach the line together, compared to the previous hill finishes.

It could be wet and windy. The route is well protected from the wind, so it shouldn’t cause any problems, but the riders will need to try and stay as warm as they can, it’s not going to be a nice day on the bike.

It’s an easy stage to control, this should really be one for the GC group. Jumbo-Visma, Movistar and Ineos all seem keen on controlling stages, in the hope of setting up a stage win. I would imagine this pattern will continue in this stage and the break will be caught before the final climb.

Set a fast tempo on the final climb, but not too fast that you burn all your domestiques. Movistar will likely have three men left in the closing stages; they’ll sense a chance to take another win. If we get a sprint from the GC group, Roglič will fancy his chances of taking more bonus seconds, he is fast.

Some riders will also hope that we get a slightly larger group coming to the finish together. This could allow a rider who’s already lost some time on GC to attack and take the stage. Due to the nature of the opening week, lots of riders already fit the bill.

Primož Roglič – he’s been looking in wonderful form. Jumbo-Visma should have Kuss and Bennett to support him all the way to the finish, which is important to cover attacks. If we get a sprint, Roglič will be one of the favourites.

Dan Martin – it’s great seeing him back in top form. After struggling through the Tour de France, due to a nasty injury, he’s now looking like his old self. After winning stage 3, he’ll be full of confidence and will fancy his chances in another sprint. As the gradient isn’t as steep in this finish, his chances aren’t as good, but he could still podium.

Alejandro Valverde – has he got anything left? I’m not so sure.

Richard Carapaz – he’ll attack, he always does. Carapaz is a marked man, there is no way Jumbo-Visma will let him get away. The climb isn’t really hard enough for him either, he would prefer something steeper.

Aleksandr Vlasov – fits the bill of a rider who has already lost time, but is good enough to win the stage. The Russian had a bad opening stage, but has been improving since. Sitting nearly 6 minutes down on GC means that he could get some freedom in the closing stages. If he can get back to the form he had earlier in the season, he’ll be fighting for many wins in this race.

Felix Großschartner – the Austrian packs a fine punch, do not underestimate him.

Andrea Bagioli – I keep banging on about the Italian, he will come good soon. If we get a sprint with around 20 riders, he will be the favourite. He needs to hang tough on the climb, but he really should be coping with a hill like this.

Not a day for the break, and lightning won’t strike twice. On the final climb, I think Aleksandr Vlasov will escape the bunch and take the win.