Now, this looks like a breakaway stage to me. 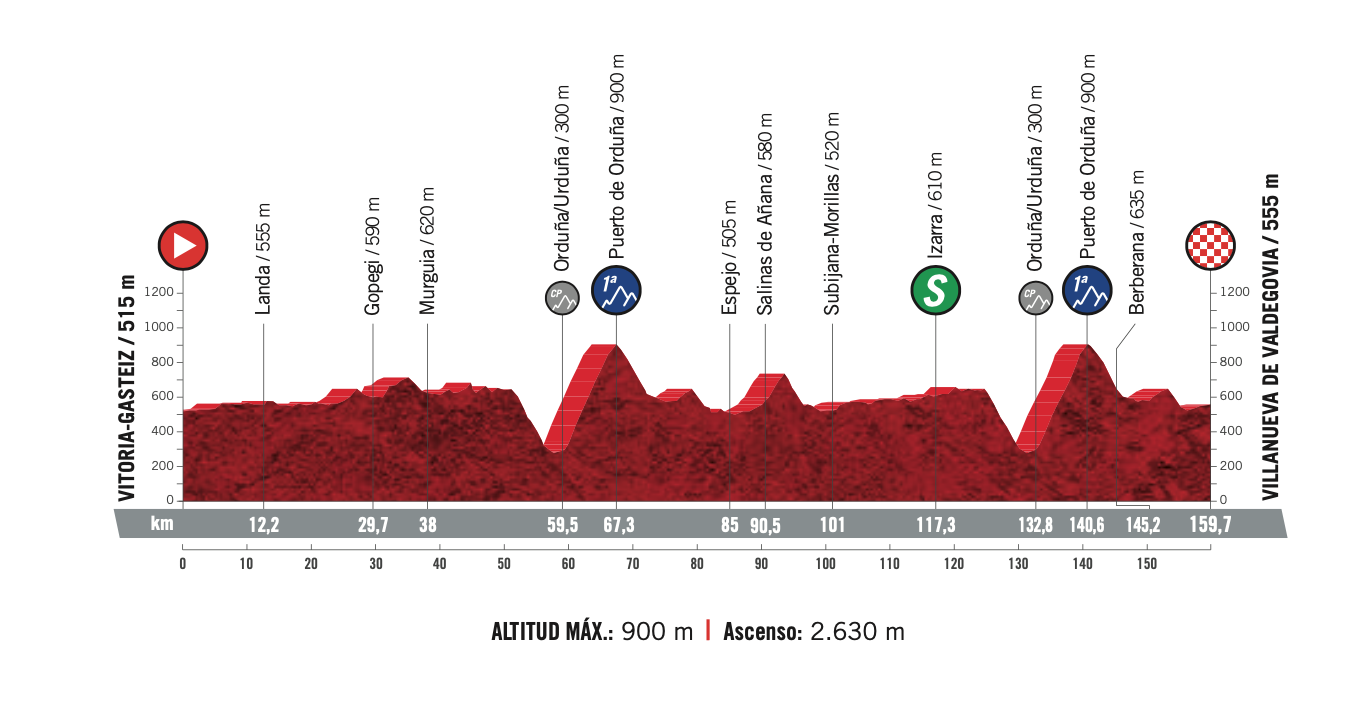 The stage is a very interesting one, with two ascents of Puerto de Orduña, which is a very demanding climb. Not only that, but the roads are never really flat in this part of the world, it’s a very testing day in the saddle.

7.8km at 7.7%, this is a tough climb. There are lots of really hard sections, it’s a hill for the pure climbers, but will we see significant GC action?

It should be a good day for the attackers, as the final climb crests with 19km remaining, which usually stops GC teams from holding it all together. The first climb doesn’t come until km 57, which means it won’t be easy for the pure climbers to get in the move. This is when teams have to be very clever about the opening stages, getting a climber to pair up with a bigger rider is what you have to do.

After such a tough stage on Sunday, there is a chance that we see a GC team hit this stage really hard. Some big riders looked vulnerable in the rain, I expect Movistar or Ineos to test legs on the climbs. It will be up to the break to get enough of a gap during the opening section of the day.

Some GC riders will see this a big opportunity to test some legs. The climb is long and difficult, it will be raced hard. Coming after a rest day, you never quite know how the legs will respond, that’s why teams will be keen on making it a hard climb. It wouldn’t surprise me to see a rider in the top 10 having a bad day.

Ineos are now in charge of the red jersey, they will be the team to control the day. Carapaz doesn’t have a stage win yet, but this isn’t really a stage that suits him. Will they chase the break, or simply wait to ride the climbs hard?

Sunny, but with a strong wind coming from the south-west. Most of the stage is well sheltered, but it does mean headwind for the climb and much of the road towards the finish. This will deter attacks from the GC group, and could mean we get a sprint from the breakaway.

Astana – with multiple options, they should really have a big say in the outcome of this stage. Aranburu, Fraile, Ion Izagirre, Kudus and LL Sánchez could all potentially win this stage, they will look to join the morning break and see what happens. They would have been frustrated at missing the winning move on Saturday, but responded brilliantly on Sunday. Aranburu, Fraile and Ion Izagirre are all local riders, they’ll have extra motivation to do well.

Sunweb – I’ve been really impressed by Sunweb in this race. They have a young squad, but have regularly made the breakaways. This is a stage that suits someone who can climb, they have options in Donovan, Power, Arensman and Storer. After enjoying success in the Tour and Giro, the team will be hoping for more grand tour wins in this race.

Rui Costa – made the initial move on Friday, but it was chased down. He then made the move on Sunday, finishing third in the rain. The former world champion will like the look of this stage, he climbs well and has an okay sprint. His experience is also a big help when deciding which moves to join.

Tim Wellens – it’s great to see him back winning again. The climb looks a bit hard for him, but it depends on who else makes the move. He made three breaks in the opening week; he seems to have great legs just now.

Guillaume Martin – it’s been a funny race for him. He tried to go with the main group on the first stage, but couldn’t cope with the pace. Stage 2 he decided to ride himself out of the GC picture. Stage 3 he hung with the main group, putting in a late attack, but was caught. Stage 5 he used his freedom to go for the break, and he made the front selection. The weird thing was he didn’t attack on the final climb, I’m not sure if that was because he couldn’t, or didn’t want to. Stage 6 he made the break, but didn’t have the legs to win on the climb. Making this break won’t be easy, but if he does he’ll love the look of the climb. The main issue is that he’ll need to go solo, but he has the climbing legs to drop the heavier riders.

Michael Valgren – wait a minute, a big classics guy for a mountain stage? On his day, Valgren can climb with the best, particularly from a break. It all depends on who makes the move, there is no guarantee it will feature any climbers. On Sunday he managed to finish fifth in an uphill finish, this stage suits him much better.

Kobe Goossens – the Vuelta is usually a race where we start to see young talent develop, and this young man fits the bill. The Belgian is a solid climber, he won the Tour of the Jura in 2019 and was second in 2018. Getting into this break will require good legs, and a lot of luck. If he makes the move, he would have a decent chance of surprising some of the bigger names.

Davide Formolo – after a bad day on Sunday, he now sits nearly eight minutes down on GC. Formolo is a strong breakaway rider, he now gives UAE another good option over the next two weeks.

Andrea Bagioli – lost a whole heap of time on Sunday, he’s now free to try and hit the breaks.

Primož Roglič – despite losing time on Sunday, he’s still the favourite if the break gets caught. We’ll have to see if Sunday was a little blip, or if he’s starting to show fatigue.

Unless Ineos go full, this is another good day for the breakaway. After impressing me in the opening week, I’ll take a win for Luis León Sánchez. Back in the GC group, we’ll see lots of attacks. Carapaz will want to test Roglič, but the Slovenian will try and take back time, if he feels good. Waiting in the wings will be Hugh Carthy, if he sense weakness, he’ll go for red.