Stage 8, and a big mountaintop finish. 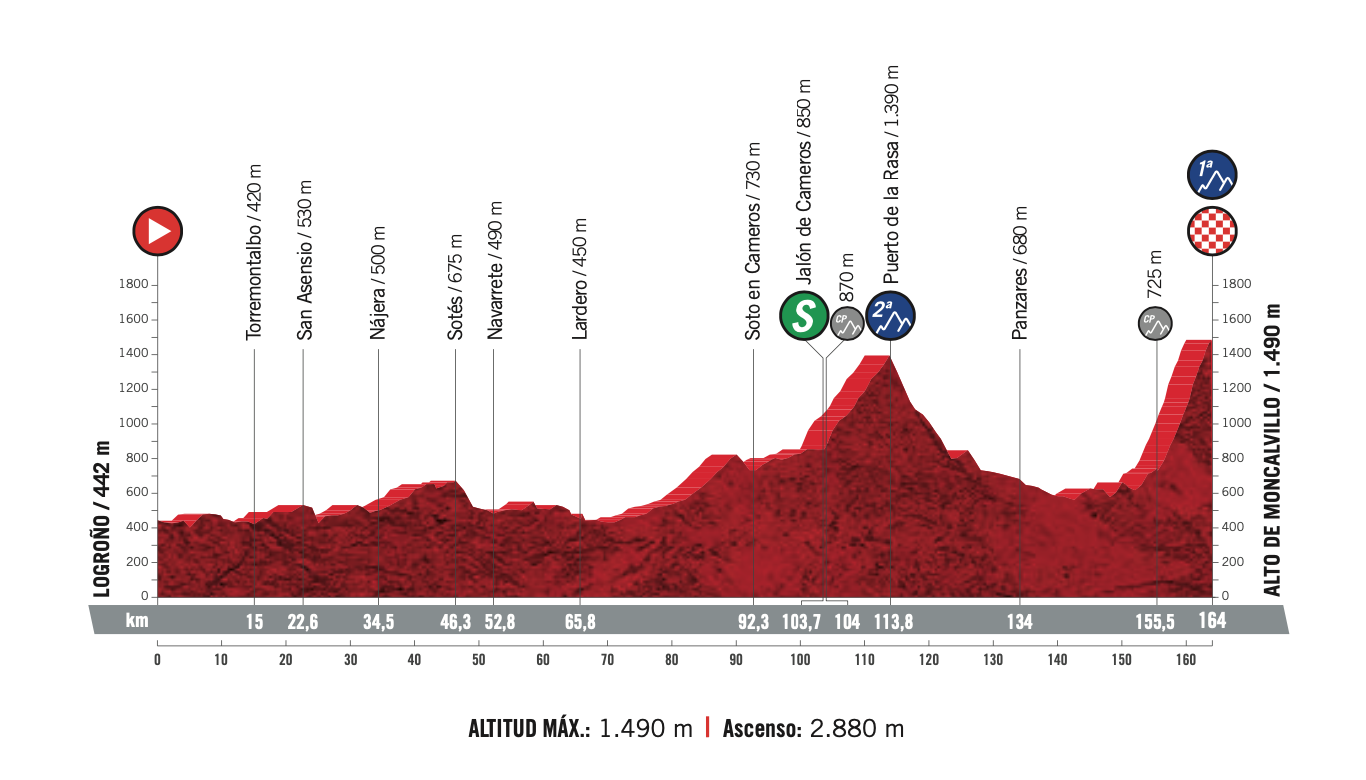 This is a huge day in the battle for the red jersey. Alto de Moncalvillo is a new climb for me, and I like what I see.

8.2km at 9%. It is narrow and almost totally surrounded by trees the whole way up. This is a beautiful looking climb, one that will seriously test the GC riders. The central section is the hardest, from km 4 until km 7, the road rarely drops below 10%. The final metres are easier, but most will be knackered by that point.

Some sun, some cloud, maybe some rain, with a little wind coming from the west.

A mountaintop finish normally gives the advantage to the peloton, especially as the majority of the stage is relatively straightforward, but recent stages have been crazy. On Sunday, Jumbo-Visma had to allow a large break to get up the road, with a few threats on GC. Today, the same happened to Ineos. It shows that the “big” teams in the race aren’t able to control the starts, which adds to the feeling of unpredictability.

If this was a stage in the Tour de France, the start would be well controlled, and a small break would escape. They way this race is going, the start will likely be chaotic and without rules. Ineos would be very happy to see the move go right at the start of the stage, their domestiques used a lot of energy today. The other GC teams will be more than happy to see Ineos having to waste vital energy, we saw today that they didn’t have many left for the final climb.

I think the break will sense another chance of success, but the relatively flat start makes it hard for climbers to get in the move. Some riders have been in multiple breaks already, they must be starting to show signs of fatigue. I sense a hard start, and a strong break to get away. One issue for the break is the length of the stage, if it takes an hour for the break to establish, there isn’t much time to build a gap. Looking to chase them down will be Jumbo-Visma, Movistar, EF and ISUN as long as they don’t have men up the road. It should really be one for the GC group, but there is no guarantee in this race.

Richard Carapaz – make no mistake, this is a huge moment in the battle for the red jersey, the final climb is a proper test. After looking under pressure, Carapaz fought back on Sunday and now leads the race. He has an 18 second lead to Hugh Carthy, but he’s not the only rider who he’ll be looking at. Sitting at 30 seconds is Primož Roglič, so you would normally think that Carapaz can simply ride a conservative race, but he can’t. With a big TT still to come, Carapaz needs to attack and see if he can take more time on the Slovenian. Ineos have looked okay so far, but I have been disappointed by Ivan Sosa. When we get far up the mountain, Carapaz won’t have any support, so I hope he attacks. This climb is one that should suit him.

Hugh Carthy – it would be amazing to see him fighting for the stage and red jersey. The big man is enjoying a fine run of form, he looks like one of the strongest climbers in the race. As he is a threat on GC, he won’t get any freedom from the others, but his attacking style of racing could upset the “big” names. If Carthy is feeling well, he’ll attack, and not in the final 2km. Hugh is a fan of striking out early and putting others under pressure.

Primož Roglič – after a really disappointing ride on Sunday, he responded well today. This season we’ve seen the Slovenian regularly win mountaintop finishes; at times it almost seems easy. His performance in the rain did raise some questions, and they haven’t all been answered yet. This stage takes on huge significance for him, a good performance is needed for people to believe in him again.

Dan Martin – I do wonder if the final climb might just be a little hard for him. Saying that, his current form is better than anything we’ve seen from him in a number of years. Sitting just 20 seconds behind Carapaz, he’ll be hoping for a good day at the office and a chance of ending the day in red.

Enric Mas – Movistar have been very impressive in this race; I wonder how they’ll approach this stage. Mas looks their best hope, but if they have multiple riders in the final group, there could be chances for Soler and Valverde. Whatever happens, expect to see them ride aggressively.

After disappointing on Sunday, expect a big show by Primož Roglič.