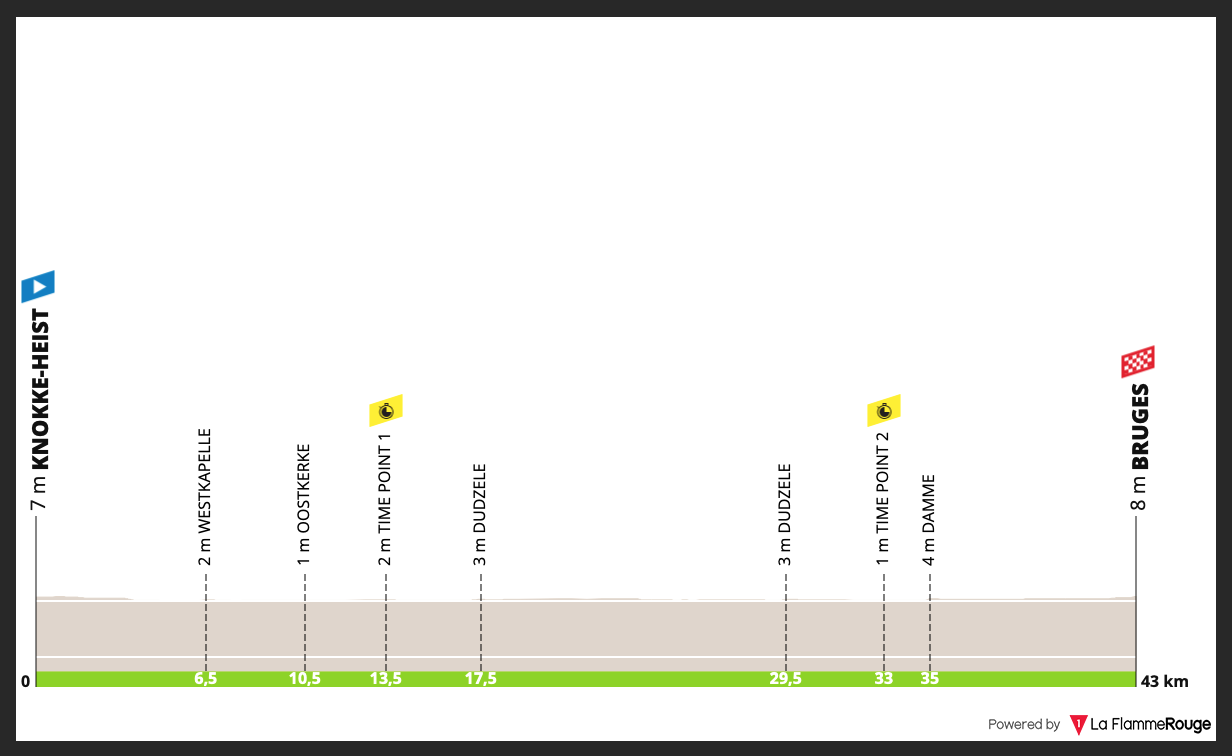 A long time trial. After last year’s route of 31km, it’s nice to see the UCI go back to a longer distance this year. As it’s the world championships I think it should be a true test of endurance, so I’m happy to see the longer distance return.

The route is almost pan flat, there is just 41m of climbing in the whole thing. Most of the race takes place on relatively wide roads, it looks like a route for the powerhouses of the peloton, you really don’t need to use your brakes much.

Sunny and relatively warm. The wind is coming from the north and should be relatively consistent for all riders.

Stefan Küng – after successfully defending his European title his confidence will be up, it really was a sensational ride. Last year was his first ever medal at the worlds, he picked up bronze and finished 29 seconds behind Ganna. Now 27 years old, Küng seems to be coming into the prime of his career, we’ve seen some top-quality rides from him this year. I’m interested to see how he copes with the longer distance; it will be a real test for him. Given what he did last week, he’ll start as the favourite for many people.

Filippo Ganna – his TT results in 2021 have been a mixed bag. He started the year in amazing from, then had a dip, but returned to his very best for the Giro. Losing to Küng on home soil would have hurt, he’ll use that as motivation and hope to win his second rainbow jersey. The route looks a good one for the Italian, he’ll start with confidence and expect to win.

Remco Evenepoel – he has the extra motivation of riding on home soil, something that should not be underestimated. After winning the Tour of Denmark, Druivenkoers – Overijse and the Brussels Cycling Classic his form was building very nicely, but he had to quit the Benelux Tour after falling ill. The Euro TT came just one week after this, I was surprised to see him go so well and take the bronze medal. He followed that up with an amazing display of power in the road race, but he just couldn’t get rid of Sonny Colbrelli on the short climb. It’s been a bit of a stop/start season for Remco, I get the impression his form is on the up, I think he’ll be better than he was last week. To win on home soil would be enormous, but the pressure is also on.

Wout Van Aert – current form is amazing, Wout is very strong just now. Unlike the other three riders already mentioned, he isn’t just focused on this race, he also has his eyes on the road race title. This makes winning the TT title a little complicated, but not impossible. The issue is how do you prepare for both disciplines, I don’t think it’s possible. Wout will have spent more time focused on the road race, but if anyone can pull of a remarkable result, then it’s Wout.

Stefan Bissegger – too long for the youngster, but he’ll still be challenging for the top 5.

Belgium to go wild when Remco Evenepoel wins his first rainbow jersey, it won’t be his last.