The fifth stage of the Dauphiné saw an almost perfect balance between the breakaway and the peloton, as the remaining riders were caught already inside the final sprint. It was a very fast and nervous finale with the peloton chasing full on with several teams committing, however only to Jumbo’s benefit as Wout van Aert managed to fly off with the win in a dramatic finale. Jordi Meeus and Ethan Hayter completed the podium.

Negative: Groenewegen dropped again in the ascents, INEOS burning most of the team for Hayter to not have the legs to beat van Aert – although both were already expected.

The final opportunity for the sprinters. The race heads into the Alps, where the infamous city of Gap will host the finale of the sixth stage. On the menu is a hilly stage, but the most complicated ascent comes early in the day, which sees the riders climbing from 200 to almost 1300 meters of altitude in the form of three categorized climbing sections.

The Col de Cabre (9.1Km at 4.7%) may provide further difficulties, as it comes late enough in the day that the pace can be quite high. It summits with 57.5 kilometers to go and after a small descent the riders will keep riding in the plateau. 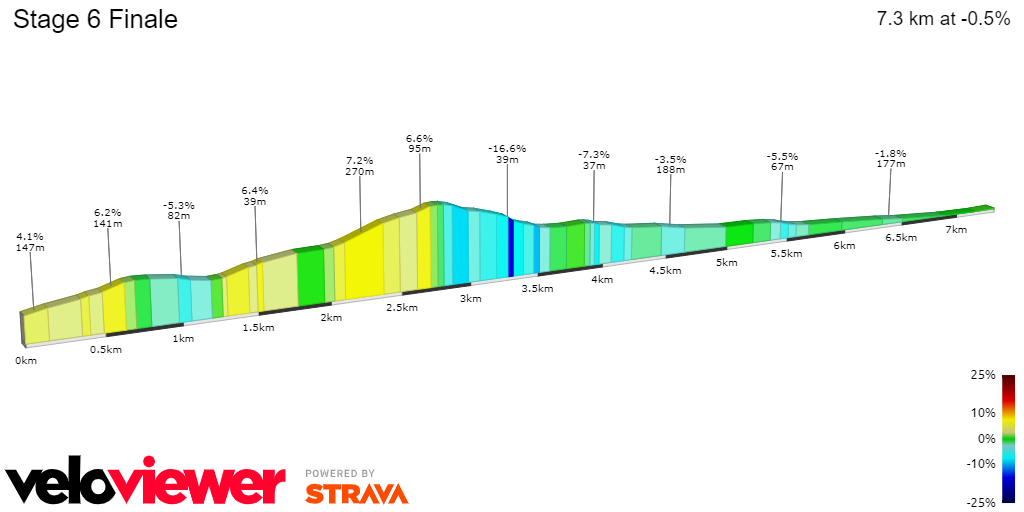 There will be a descent in the final 15 kilometers which will take the riders into Gap. However there will be a punchy loop inside the city, with 3.2Km climb at 2.8% ascent which will leave the riders with just 4.5 kilometers to go. It has some small gradients that can be enough to attack, and then the ride in to the finish is very fast which may see an attack succeed. 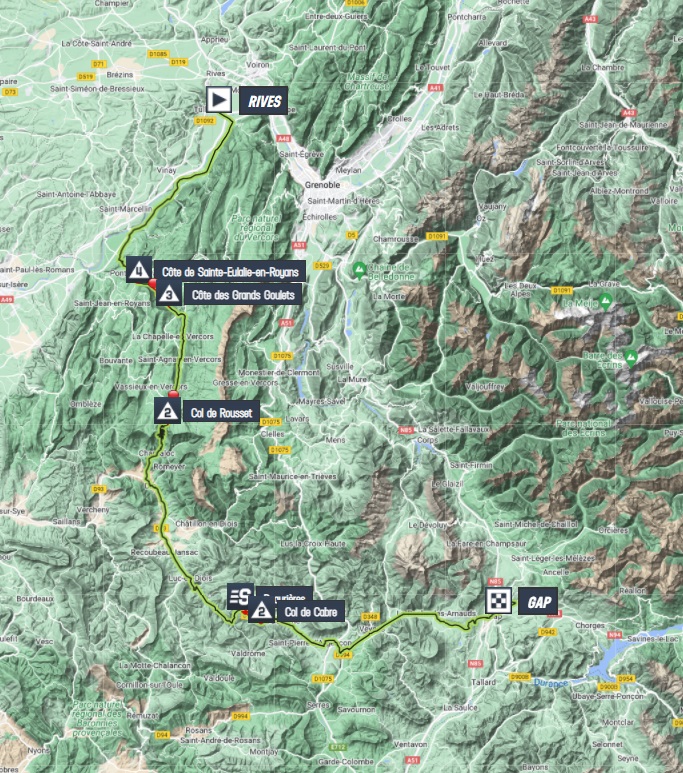 The wind won’t be as strong, but there will still be a meaningful breeze from the northwest. On paper, ideal for a breakaway, but in the mountains much of the road will be covered and it won’t really make a difference in the day.

Jumbo-Visma have been working very hard to get a second win and they had two stages where a day’s full of work ended with no profit. They won’t risk that again surely, they got their second win and will be looking to save the team towards the mountains where they will have a lead to preserve.

BikeExchange could in theory work again but what are the chances it’ll work this time… INEOS also clearly don’t have the capacity to beat van Aert directly, Meeus is the only rider that came close but unlikely that BORA will help control the stage and have an easy bunch sprint for the Belgian.

With the climbs, some favourable wind and the mountains ahead, I expect the breakaway to succeed.

Wout van Aert – Obviously the man to beat and no need to name the arguments again. He will be the fastest sprinter at the end of the day, and he is the one that all other teams have to find a way to beat.

Ethan Hayter – He’s clearly got good form but to beat van Aert he would need the Belgian to suffer a mishap in the finale. Nevertheless with his climbing, rolling and sprinting abilities he’s an obvious contender, even a breakaway isn’t unthinkable.

Dylan Groenewegen, Jordi Meeus and Juan Sebastián Molano will be within the pure sprinters, however it’s quite unlikely that they will be able to profit from such a day. Most riders, even some that have been in sprints are likely to try and go on the attack because realistically they have no chance of winning in a sprint. Hugo Page, Clément Venturini, Edvald Boasson Hagen and Matis Louvel aren’t as suited to succeeding in such scenario, but riders like Jasper Stuyven, Sean Quinn, Luca Mozzato and Andrea Bagioli could have good chances.

A breakaway is possible once again and so there should be some riders who could be going for a win in that sense. List can be pretty big as in last few days breakaways have been very dangerous, however some riders can have better chances: Filippo Ganna, Lukas Postleberger, Nils Politt, Stan Dewulf, Oliver Naesen, Greg van Avermaet, Bruno Armirail, Rémi Cavagna, Jannik Steimle, Jasper Stuyven and Thibault Guernalec to name a few.

#215 Eliot Lietaer – Let’s once again try to get in a breakaway, keep Pierre’s jersey. We’ve had this conversation some days ago, the goal remains exactly the same for the time being.

#196 Maxim van Gils – In the mountains we’ll try something, but here let’s keep the powder dry. Just stay safe in the peloton and save your legs.

#85 Anders Skaarseth – A day to protect Tobias. Perhaps a breakaway is possible so some of the guys will be watchful, you can too, but we also have the responsibility to keep him safe to make sure he can do his thing in the mountains.

I’m going with a win for the breakaway. Wout van Aert is the man to beat and no team will fully commit to a chase. Jumbo have gotten the win they were chasing now for the Belgian so tomorrow they should let things go, to save the team for the mountains. Remi Cavagna will win.

Tomorrow’s race has prizes of at least €250 and an entry fee of only €5. Make good use of your knowledge! https://zweeler.com/game/cycling/FantasyCriteriumduDauphine2022stage6/main.php?ref=790