The first day in the Alps saw some action in the breakaway, as there was an intense fight early in the day building up a large group that went on to fight for the win. Bob Jungels launched an attack with over 60 kilometers to go, a dangerous move at first but incredibly successful at the end, as the Luxembourger went on an incredible ride through the mountains to take a solo stage win in Chatel. In the peloton UAE controlled all day long, but to no avail as the GC riders came to the line together – with 3 seconds gained for Pogacar and Vingegaard in the final sprint. 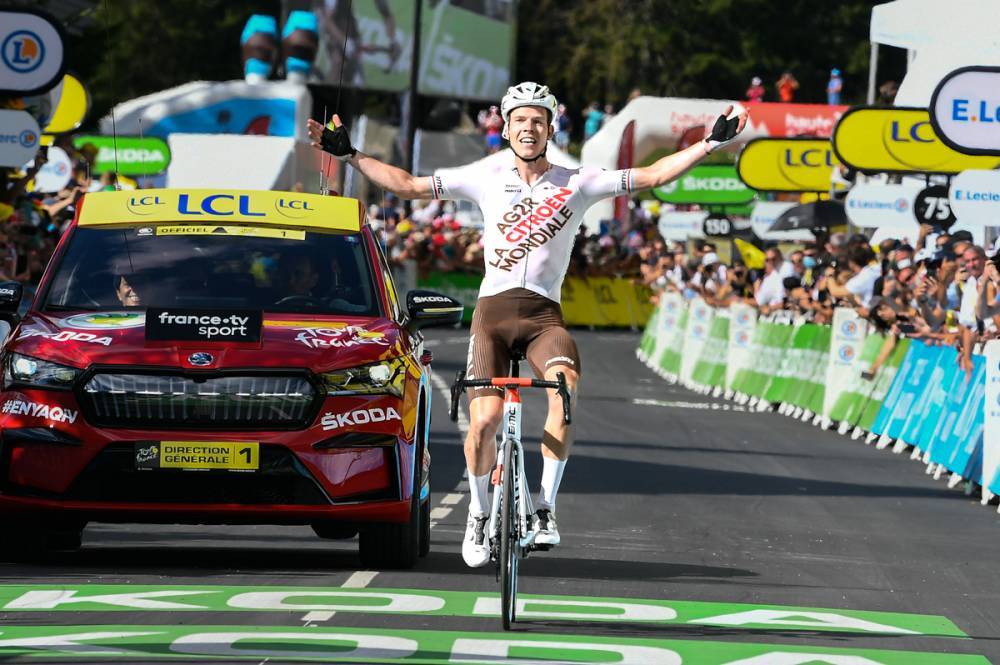 Positive: Bob Jungels bringing in a very special win, confirming his return to the top.

Negative: The GC riders didn’t see much action, however Daniel Martinez fell out of GC contention after a bad day. 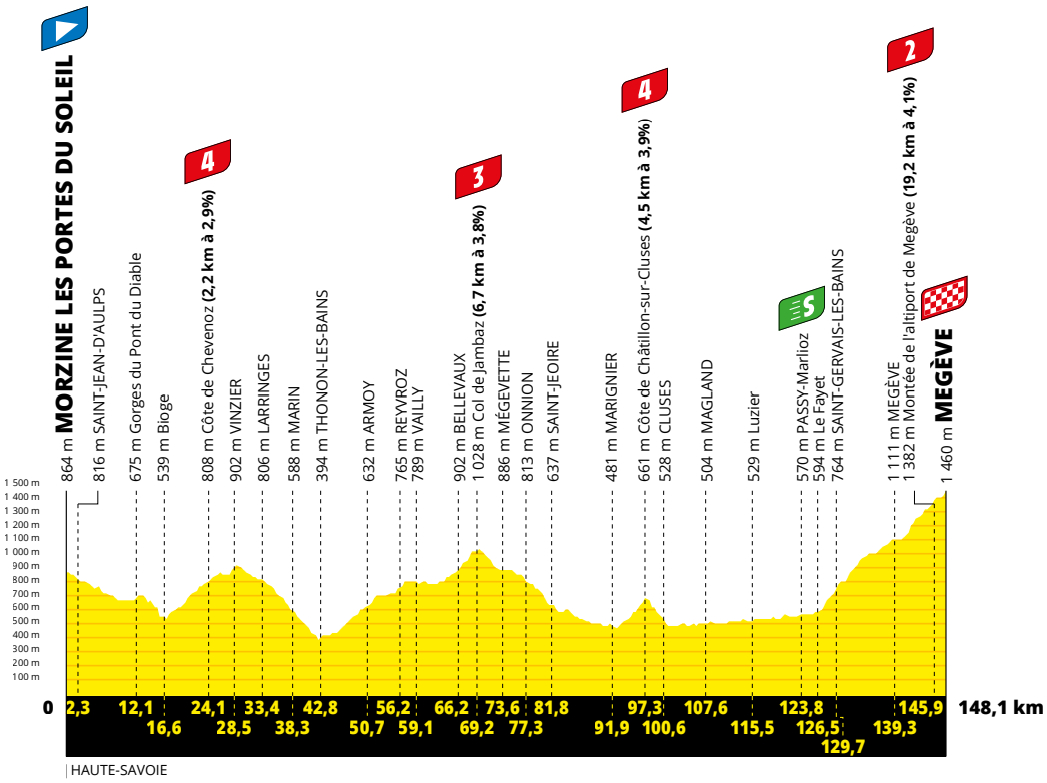 After the rest day comes a day which is very mixed. On paper, one for the climbers, however on closer inspection many riders can succeed on such a stage. It’s a short day as most mountainous days on this year’s edition are. It starts off downhill, and has an initial ascent that summits on kilometer 28 which should see the breakaway go up the road and the race settle down.

All climbs on this day are big-ring ascents, and so despite the initial high-mountain appearance, the rouleurs and puncheurs also stand a chance. The day sees a combination of rolling hills until the riders reach the base of the final ascent. 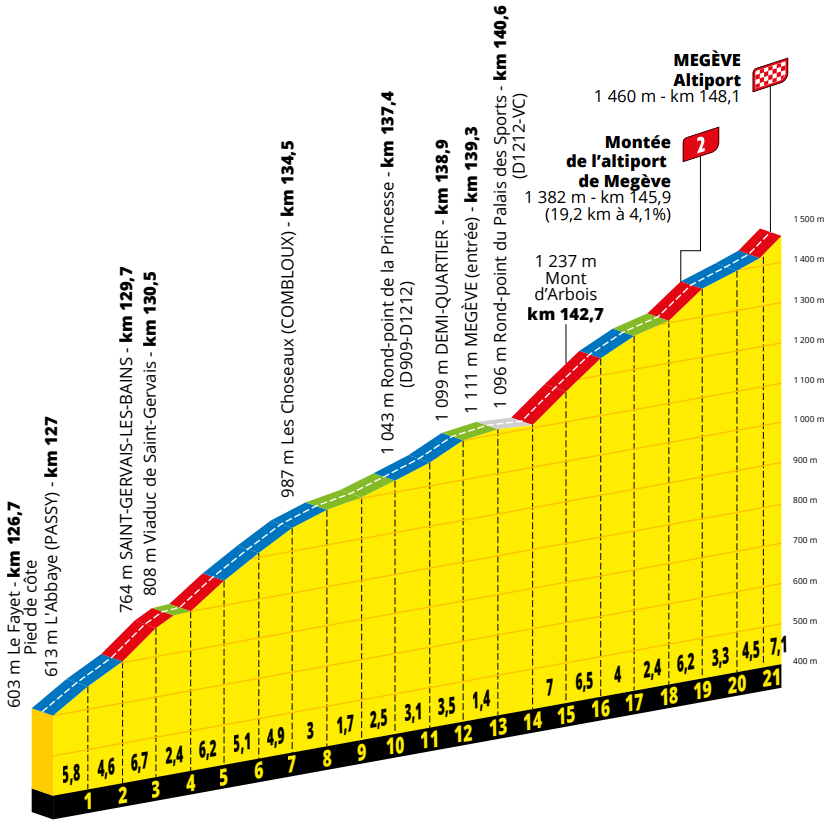 That will be into the Megève Altiport. A long climb, with over 21 kilometers in distance but just over 4% in average gradient. The opening seven kilometers reach above that, but then long sections of pan-flat roads and some areas where the riders can rest and even slack on a few pedal rotations will see them recover. Hence, this isn’t a constant uphill effort, but more a combination of two ascents. The final one is over 7 kilomers long, it does feature flat-ish sections but it also has some rougher ramps and with the distance attacks may be more effective. 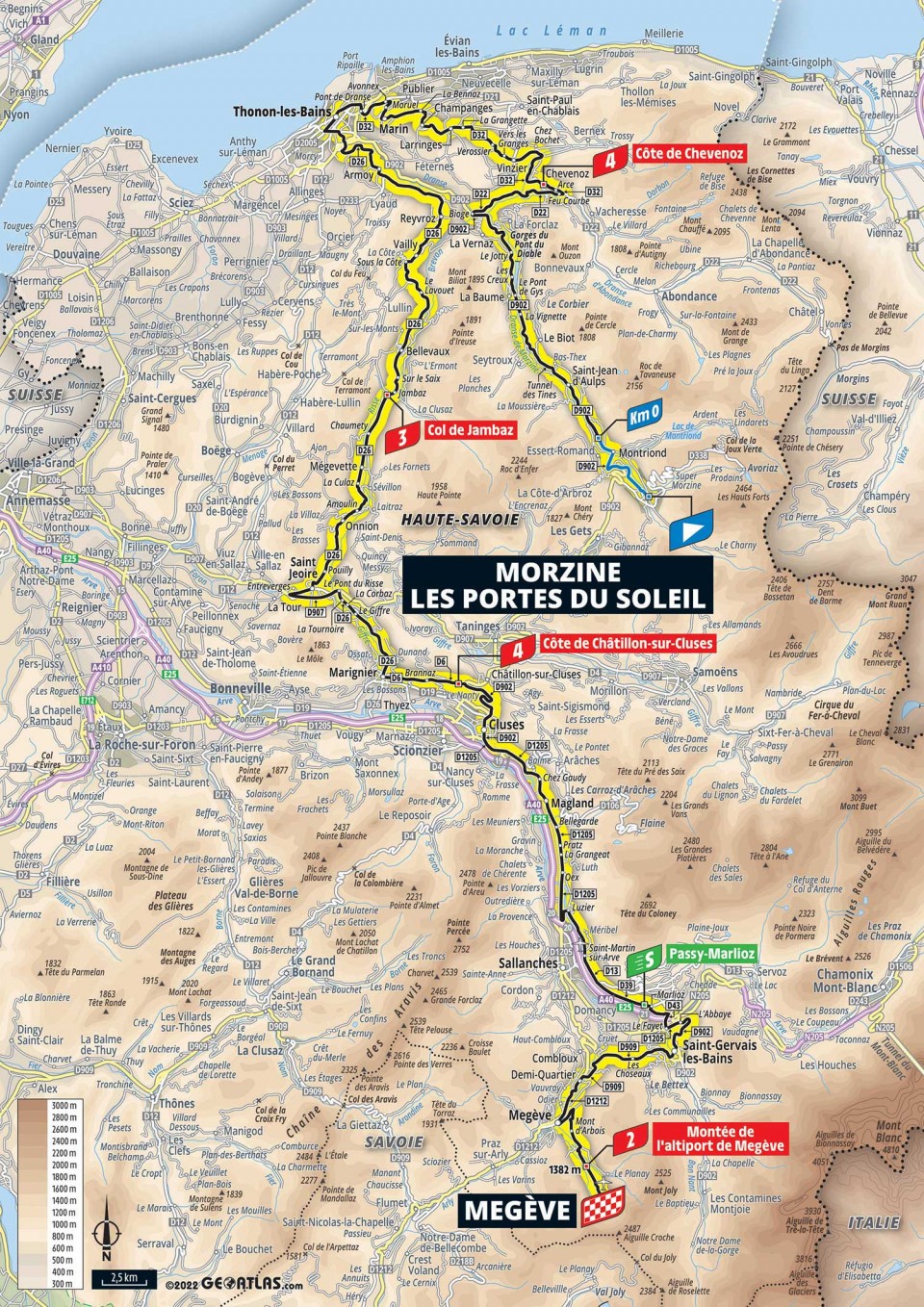 Slight breeze from the northwest. Early in the day a headwind, however throughout most and the final ascent it will be a noticeable tailwind.

UAE have been racing rather aggressively with little reason, which is why I won’t give it more. Still this is a certain breakaway stage, it comes before two crucial stages for the GC, it doesn’t feature any climb where differences can be made however it features a lot of climbing. Besides the short distances, the tailwind and the fact that it comes after the rest day are all favourable aspects towards an escapee win.

BORA – They carry GC ambitions but it’s secondary cards have the form to chase a win. Lennard Kämna, Max Schachmann, Felix Grossschartner and Patrick Konrad are all valid options to fight for the stage win here, besides having strength in numbers.

Cofidis – Simon Geshcke should be chasing the KOM jersey, but Cofidis have numbers and total freedom to chase the stage win. Ion Izagirre will be a natural option for any mountainous stage as he is one of the few climbers who’s focused specifically on it, and Benjamin Thomas will also be a dangerous rider for such rolling climbs.

This isn’t a day for the pure climbers, however they can indeed do well. INEOS will have Daniel Martinez in case he’s recovered from his bad day on stage 9 – besides other options but I believe he will be the only one with freedom. The likes of Thibaut Pinot, Jakob Fuglsang and Michael Woods will be riders to take into consideration, with Carlos Verona and Mattia Cattaneo as further cards in climbers.

As for the rest I don’t rate a specific type of rider. Puncheurs and rouleurs all have an opportunity as the climbs allow for slipstreaming and resting. In the field of rouleurs the likes of Jan Tratnik, Stefan Kung, Alberto Bettiol, Tim Wellens and Quinn Simmons are all in my opinion very dangerous riders. Michael Matthews can’t be considered one, but he’s got the form and honestly is very much an option too as he’s shown brilliant climbing performances in the past.

As for more pure puncheurs we see the likes of Dylan Teuns, Andreas Kron and Pierre Latour who will be favourites aswell for such a finale.

If by some chance the peloton does fight for the win then naturally Tadej Pogacar will be the man to beat, and would be very unlikely to see anyone managing to top him.

#73 Simon Geschke – Time to get in the break Simon, the KOM jersey is a possibility. We will give you the support, you’ve got good form and it’s time for us to attack it once again and make a serious bid for the jersey.

#24 Filippo Ganna – A day that suits you I won’t lie, but the priority is the GC here. Let’s stay with the guys, make sure we keep our firepower to attack the first few places if we must.

#124 Louis Meintjes – Do your thing Louis, if you want to stay in the peloton it’s just a matter of following the wheels until the line. We can really benefit from a breakaway here though so let’s look into that, we’ll have some guys help you out because you’re in a position to have freedom and can really benefit. 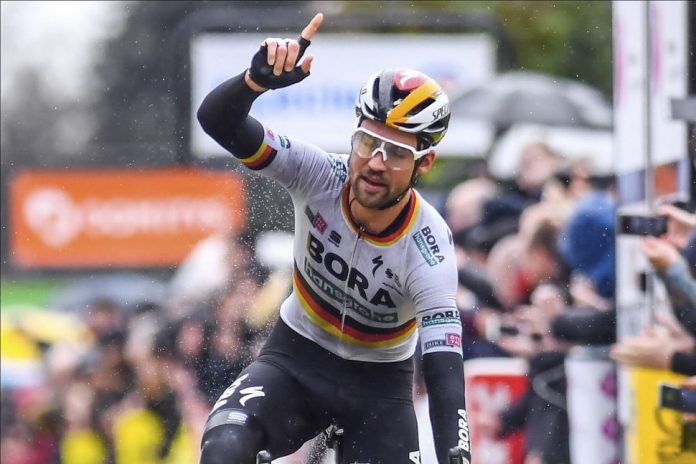 A win for the breakaway is certain for me, and my call will be for Max Schachmann. BORA have the numbers and a few riders very well suited for such a finale. The German has returned to form and will be my call for the win.