A surprising start to the Tour de France. The opening time-trial was tricky as it was, but the rain throughout the day caused issues to many, and has seen a surprise winner in Yves Lampaert who combined perfect form with a bit of luck with the weather to take the most important win of his career and the first yellow jersey. Wout van Aert and Tadej Pogacar finished second and third after the finish. 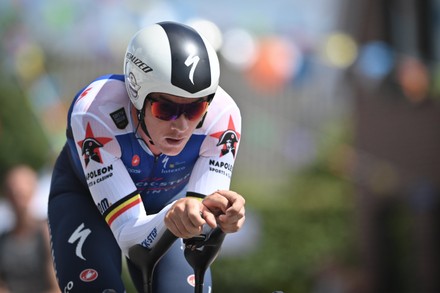 Positive: Lampaert taking a massive win and bringing in the first win for Quick-Step. Tadej Pogacar took some risks, and they’ve rewarded him as he finished above all other GC contenders and has already taken time on rivals.

Negative: Stefan Bissegger and Christophe Laporte crashed whilst in contention for the win in the wet corners. Ben O’Connor perhaps the negative surprise in terms of time, although the gaps weren’t crucial today. 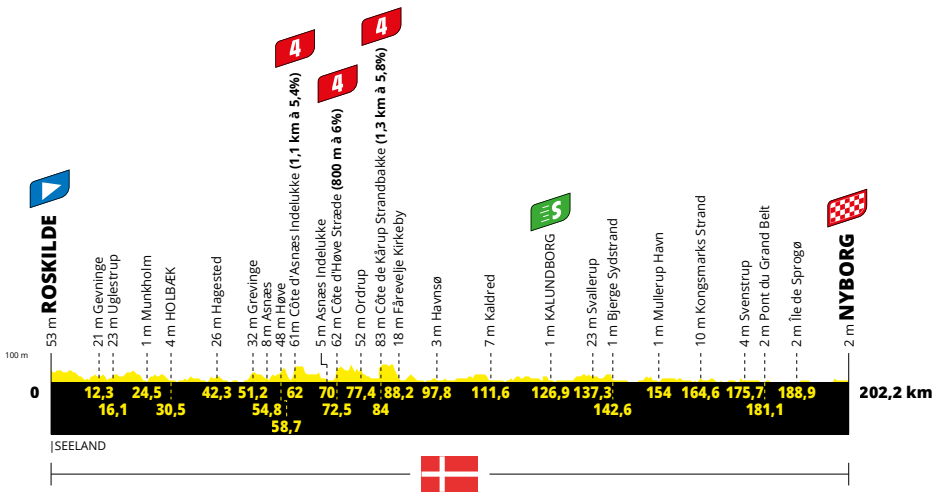 The second stage will be the largest of the race’s Danish section, with 202 kilometers on the menu serving up the first opportunity for the sprinters. It isn’t a complicated day, mostly pan-flat, however the three fourth category climbs and the intermediate sprint in the middle of the day will see some action.

The day can also be marked by the win. Although in the profile it isn’t clear, the riders will go over the 16.2-kilometer long Grand Belt bridge. It will be as exposed as it can be, a straightforward section where tension will be very high and chaos can emerge if the wind is particularly strong on the day. 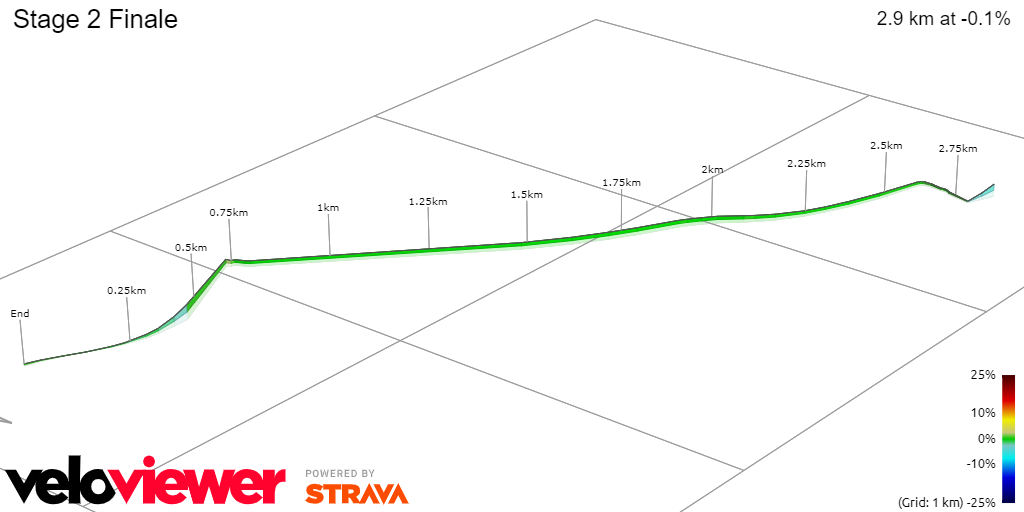 As for the finale inside Nyborg it isn’t too complex, with the exit off the bridge seeing the riders head into the town center. The last corner comes with 750 meters to go, and from there on it will be a furious finale where the sprinters will show their strengths. 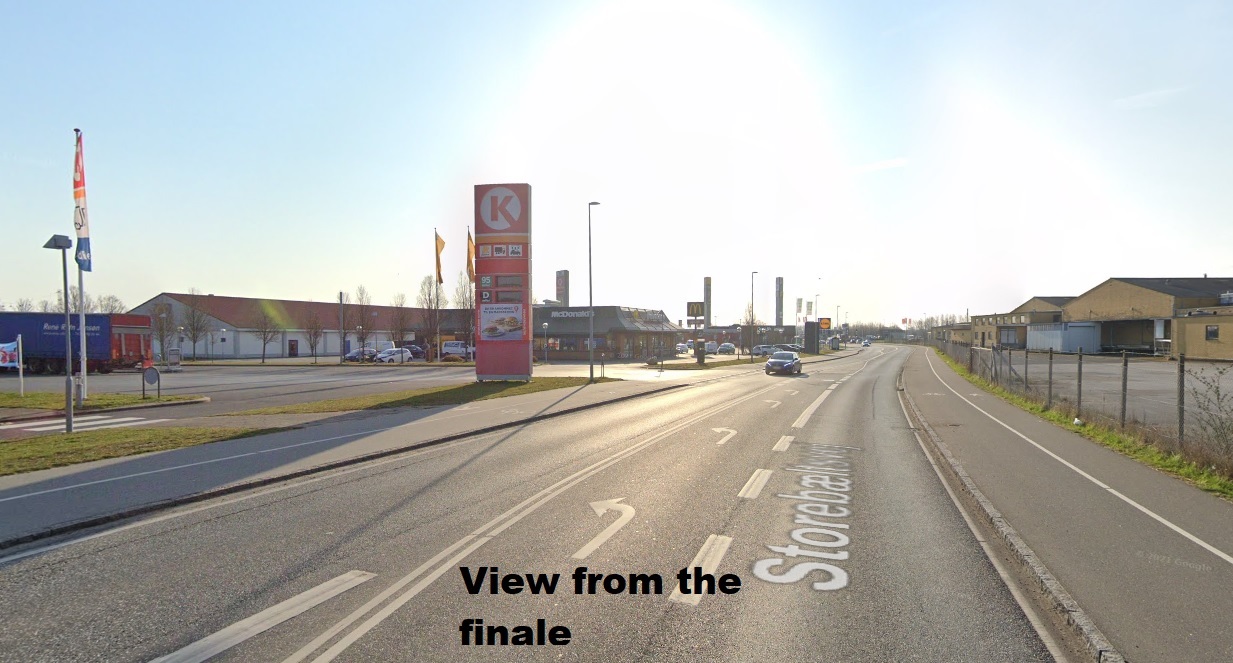 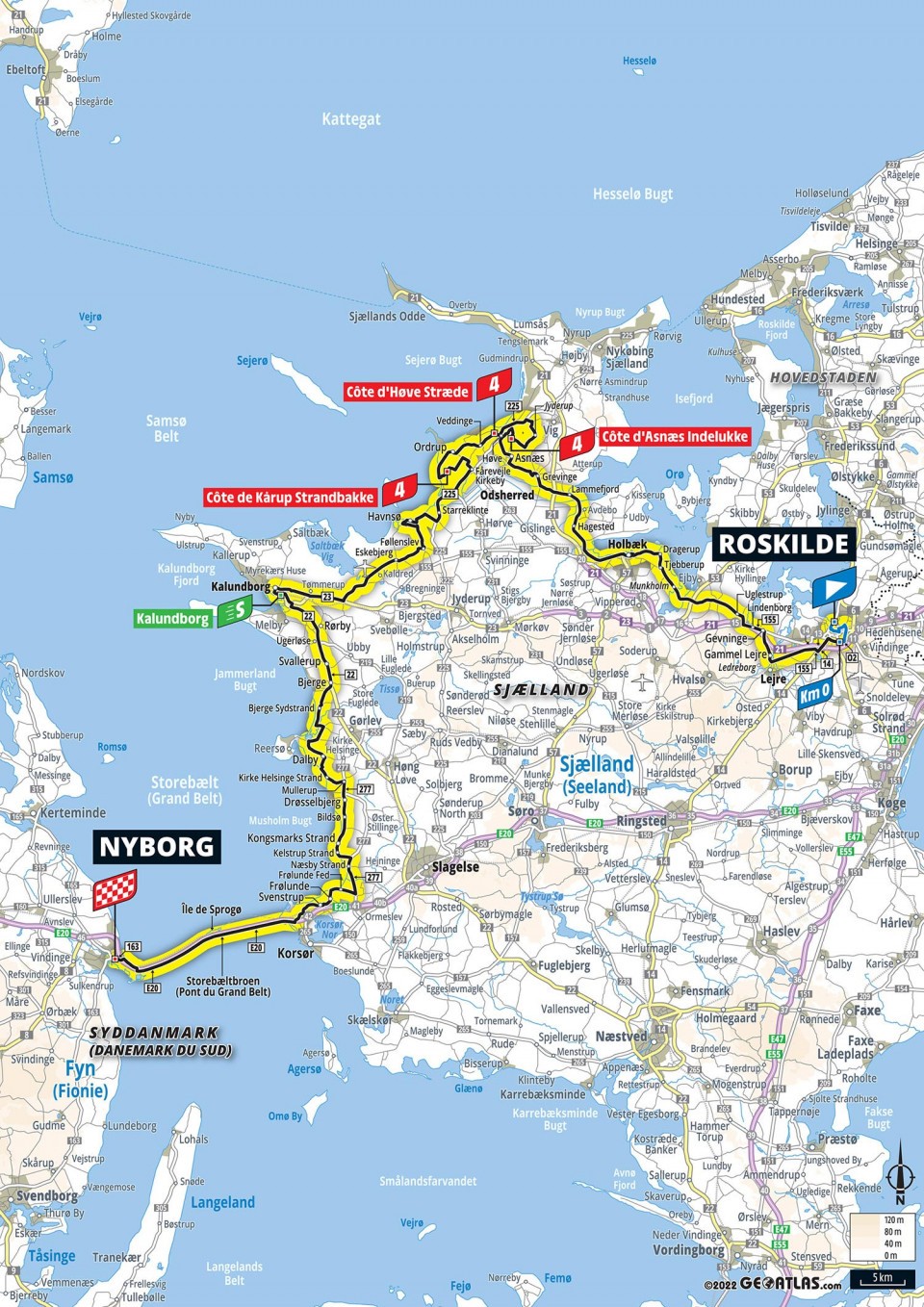 Wind will be meaningful, however from the southwest. Will be a tricky day, however the grand feature of the day which will be the bridge crosswind will be safe for the riders mostly, as a block headwind is expected. The finale should also see a headwind into the finish straight, making it more chaotic as the riders will be more bunched up.

It won’t happen, simple as that. A stage like this, full of hopeful sprinters, tension and pan-flat roads provides no opportunities for escapees.

Fabio Jakobsen – There won’t be a man to beat tomorrow, but in chaotic finishes Quick-Step are always big favourites specially with Jakobsen in the helm. With Morkov, Sénéchal, the yellow jersey Lampaert and Asgreen there will be a lot of firepower to deliver a second win.

Caleb Ewan – There will be chaos, this is bad news for Ewan specially with an unknown leadout. On the other hand, the headwind finale is perfect for him, and the Pocket Rocket will want to strike early to get the early confidence.

Jasper Philipsen – Philipsen is a master at positioning and the headwind means a good opportunity for him. Alpecin’s leadout isn’t world-class, however if van der Poel plays a role in the finale Philipsen may be well supported. Will he have the speed to finally take a win here?

Dylan Groenewegen –  Groenewegen and BikeExchange are likely the biggest wildcards for this sprint. The Dutchman can win or be out of the sprint and neither are a surprise. BikeExchange are all in for him, with Luka Mezgec and Michael Matthews as the most important pieces in the leadout. This pan-flat stage is one of his best opportunities.

Wout van Aert – Second already, van Aert departs in green. He’ll want a yellow jersey though aswell so the Belgian will have extra motivation. With the wind blowing and two GC riders to keep safe, tomorrow will be Jumbo-Visma’s first test to see how they can have all their ambitions combined. Laporte and Van Hooydonck are good powerhouses to keep him towards the front.

As you can tell, this will be a chaotic finale, specially in the first sprint of the race. The win can come from other riders, specially as there will be strong leadouts outside of these names. The likes of Mads Pedersen and Alexander Kristoff will be the best examples, also with motivations of racing at home and close to home for them respectively.

Alberto Dainese also has the speed to take a win if he finds the right opportunity on a day like this. Peter Sagan is expected to feature near the front, with riders like Danny van Poppel, Max Walscheid, Hugo Hofstetter and Magnus Cort Nielsen all names who can easily feature in the Top10 as long as they don’t get swarmed.

#117 Martijn Tusveld  – There won’t be much to do today Martijn, your job is to make sure that throughout the guys are safe, get their water and just roll along without difficulties. Towards the end the fast young guys will head to the front of the peloton, whilst you and Romain relax towards the back and above all avoid crashes.

#53 Andrea Bagioli – We will have a lot of responsibility here, both to lead the peloton as we have yellow and then fight for the stage win with Fabio. Mikkel will take up the work throughout the day, but you should be right there in the wheel throughout the day for us to make presence at the front. The leadout guys will be set for the finale, but as there will be a headwind see if you can protect them a bit towards the end before the peloton enters the final technical kilometers.

#61 Enric Mas – Stay safe Enric! Luckily the wind doesn’t favour chaos. Imanol and Albert will take care of you, should follow their wheels and no-one else’s until it’s safe to let go in the final kilometer. The race is long, so let’s start as calm as possible.

The first sprint of the race, as traditional I think Quick-Step will nail it with the most consistent leadout in the race, and Fabio Jakobsen for the win.