A chaotic stage as expected. The stage was won by Simon Clarke who was part of a six-rider breakaway, and in a photofinish outsprinted Taco van der Hoorn in the final meters to take a very important win for his newly-bright career and Israel – Premier Tech; Edvald Boasson Hagen finished third.

In the peloton it was a whole different race with Wout van Aert crashing, Jonas Vingegaard having several mechanicals and then Primoz Roglic crashing aswell. Jumbo-Visma had a bad day, with Roglic shedding over two minutes to Pogacar. Pogacar attacked in the peloton and gained some time in the end, as the peloton somewhat regrouped in the final kilometers having the GC less changed. 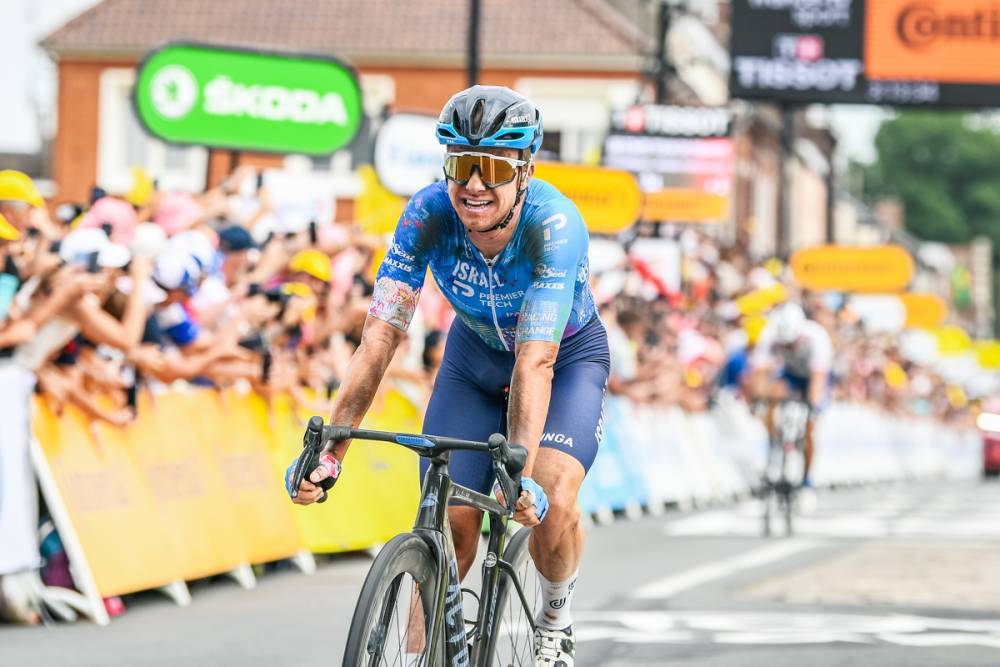 Positive: Simon Clarke taking a massive win, Pogacar taking some time on his rivals but specially on Roglic. Everyone who survived the day without crashing and loosing time was a winner with no doubt. 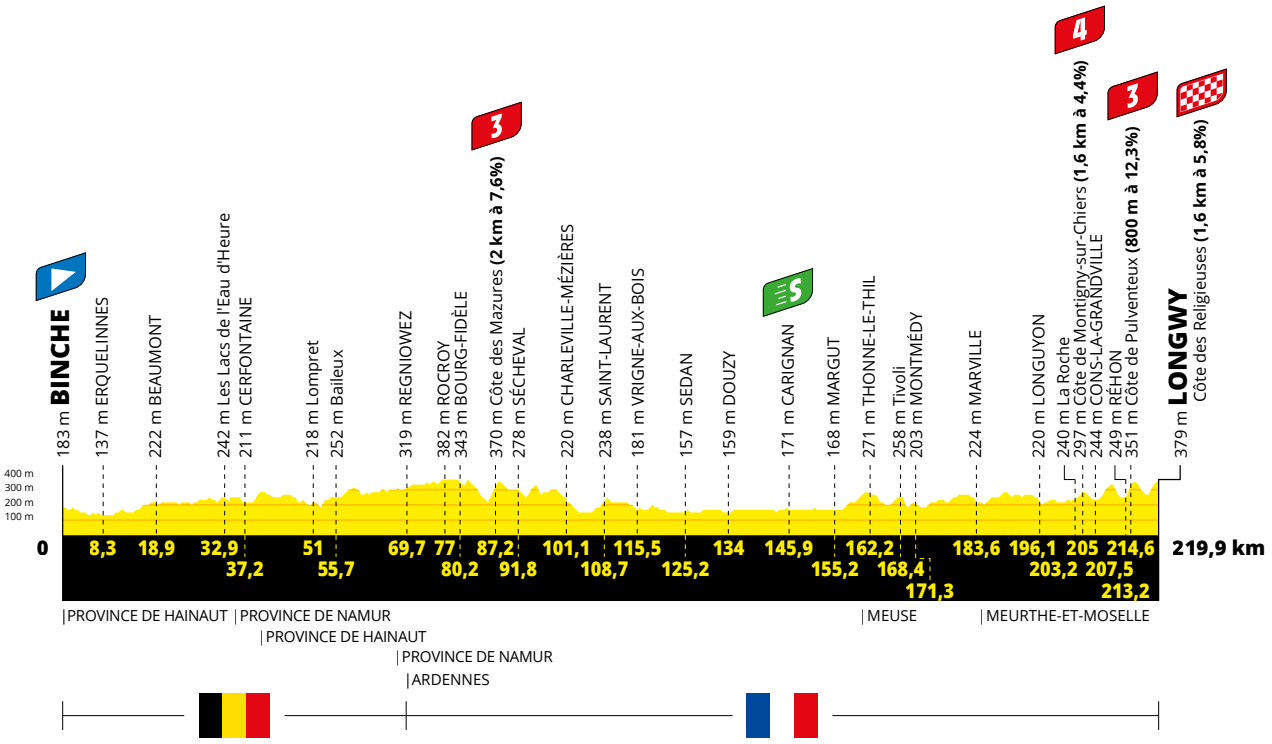 Stage six will be the first hilly day of the race. The start will be in Binche, as the peloton will travel to Belgium overnight. This will be the longest stage of the race with 220 kilometers in total. This is a day for the Ardennes classics specialists to thrive. The start is relatively flat and will see the riders return to France, for a finale in Longwy.

Beforehand there will be some hilltops. 15Km to go (1.6Km; 4.1%), 9.5Km to go 2.3Km; 4.3%) will warm up the riders. This will be a traditional classics day, where the riders who want to fight for the stage win will have to save their one bullet to the perfect timing to have a chance at winning the stage. 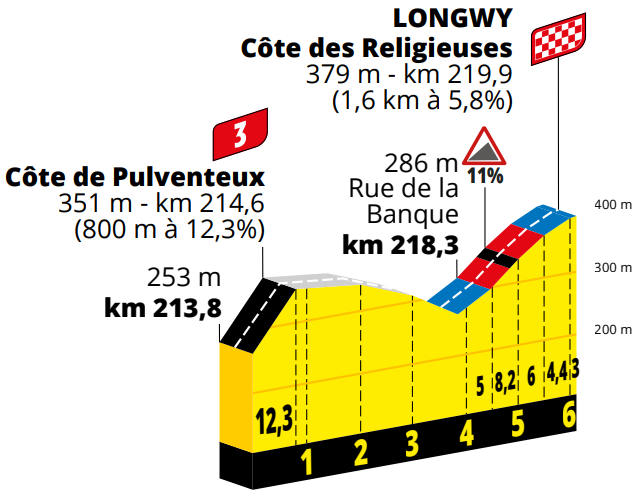 As the riders enter the town they reach the summit of the Côte de Pulventeux, 800 meters long at 12.3% average gradient. It’s a brutal ramp which may see attacks, and summits with a mere 5.5Km to go. The final ascent will be 1.6 kilometers long at 5.8%, after a short but technical descent, it will feature ramps up to 11% and be a perfect opportunity for the puncheurs. 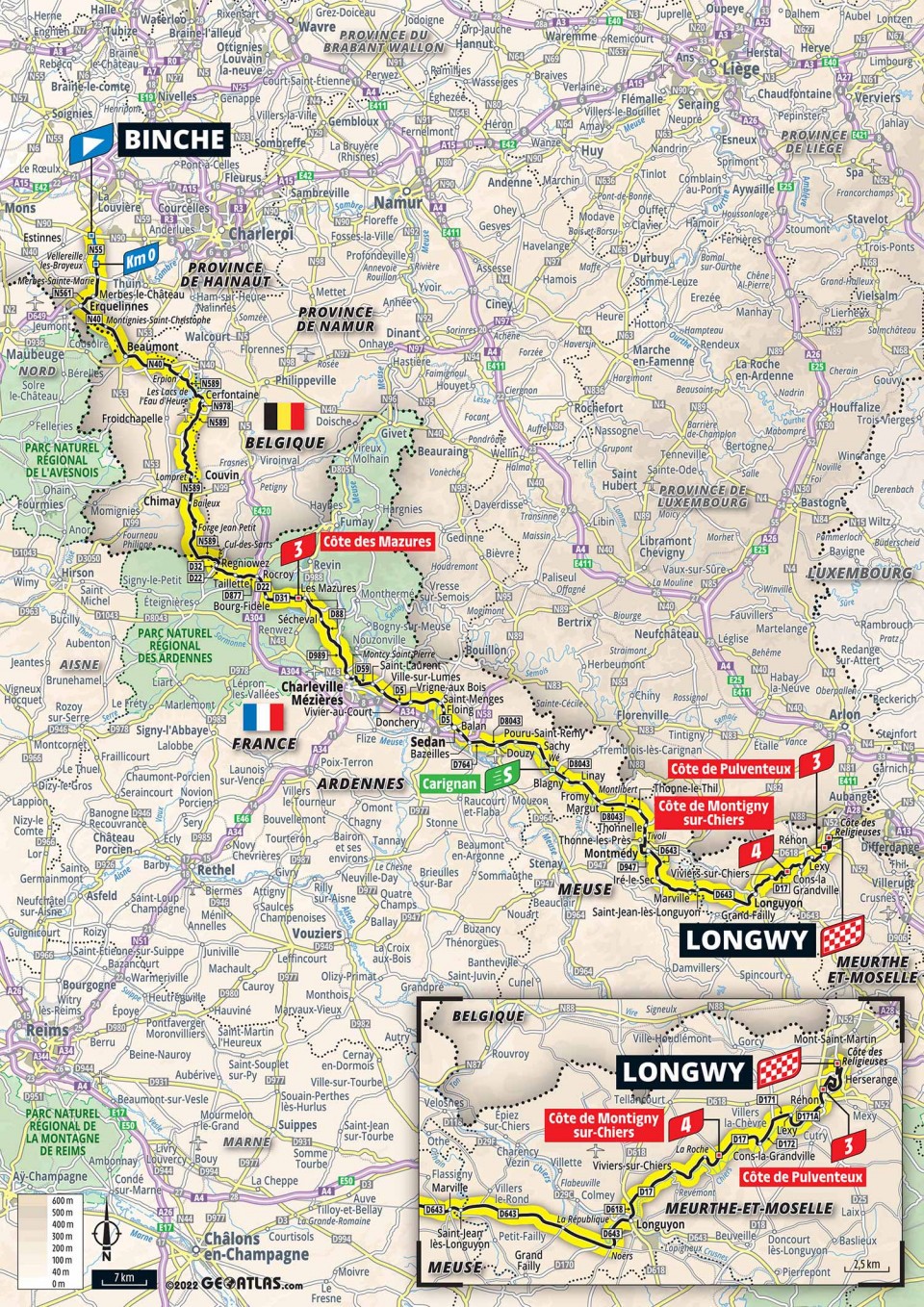 Moderately strong win and slight chances of rain from the northwest. This is dangerous, it will see a tail and cross-tailwind throughout the whole day. Favourable for breakaways, making the day harder. As for the final climb it should be hidden from the wind due to the hill and urbanization, but throughout the day it will be important.

The likes of Alpecin-Deceuninck for example have good reasons to chase as this is Mathieu van der Poel’s best chance to win a stage in this Tour de France. That isn’t their normal strategy however as they frequently launch riders into the breakaway. Jumbo-Visma lead the race but they won’t work, as won’t UAE Team Emirates or INEOS who have the other riders who could be the favourites to win this stage.

Wout van Aert & Primoz Roglic – Primoz Roglic would be a strong contender for such a finale, but will his shoulder be good enough for him to be at his best? I think Jumbo will try and have a calmer day to recollect themselves and reacess strategy. I think the stage win will be a higher priority as Wout van Aert has look in super form so far and can surely resist the gradients and hope for a sprint.

Tadej Pogacar – Overwhelmingly strong on the climbs, hills, time-trials and cobbles. Pogacar can also sprint better than pretty much any climber. He is also incredibly good at avoiding crashes and even without support of the team. That should be the case tomorrow though, Marc Hirschi will be great support, and Pogacar can without a doubt take his first win of the race.

Mathieu van der Poel – He’s been saving himself until now. Van der Poel’s initial time-trial shows he’s got the form, and so far he’s been under the radar. He’s got his as perhaps the best suited day for him throughout the three weeks, such a punchy and explosive finale will be have to seized by Alpecin.

On the climber’s side of riders who can thrive towards the end you have more riders – although to beat Pogacar is a very hard task. Daniel Martínez, Adam Yates and Geraint Thomas will all be options for INEOS. Jonas Vingegaard, Aleksandr Vlasov, David Gaudu, Jakob Fuglsang and Michael Woods can also have a strong finish here.

As for the puncheurs there are also very strong names. Tom Pidcock, Dylan Teuns, Michael Matthews, Max Schachmann, Mathieu Burgaudeau, Andrea Bagioli and Victor Lafay can all go into a final sprint with good chances of taking a win, specially if the pace isn’t as sharp. Benoit Cosnefroy would be a strong name for a finale like this but doesn’t seem to have the form.

Despite those some may succeed in a late attack. The likes of Matej Mohoric, Andreas Kron, Tim Wellens, Felix Grossschartner, Lennard Kämna can do these kinds of moves well.

As for breakaway possibilities – which are quite possible in my opinion – it isn’t easy to predict who will be there, as the start is flat and the proximity to the yellow jersey is unlikely to be problematic according to Jumbo’s style of racing. Mikkel Honoré, Simon Geshcke, Anthony Perez, Jan Tratnik, Stefan Bissegger, Alberto Bettiol, Brent van Moer, Quinn Simmons, Alexis Vuillermoz and Hugo Houle are all cards to play.

#34 Benoit Cosnefroy – Things are not going well until now. I think you’re far from the right form honestly, and this would be an ideal finale for you. What to do then? We’ll give you an opportunity, Ben lost a lot of time today and we can afford to give you some protection, we’ll at least give you a chance.

#47 Max Schachmann – Max today is a good day for you. Aleks is going to want a good finale, but we don’t want you working as you both have some chances. Ideally you both stay in the wheel, and perhaps play with the numbers in the final 500 meters. Whether it’s you or him you see on the road.

#114 Nils Eekhoff – Let’s try and get in a breakaways Nils it’s our best way to fight for the stage win. Ideally, taking advantage of the fast start, and then anticipating the moves of the puncheurs before the final ascents – using the flat roads to your advantage.

There are little questions for me at this moment. Tadej Pogacar’s performance today was somehow expected, but nevertheless impressive. UAE could barely give any support yet Pogacar was the strongest in the terrain where on paper he could be most fragile. He can with no problem outsprint the riders above, and will be comfortable climbing.