Chaos and then an expected finale. The sixth stage of the Tour de France saw an extensive battle for the breakaway with Wout van Aert repeatedly trying to get in the move. Eventually he did, but in a small group that had too much chase, eventually the yellow jersey switched hands. The stage was to play for in the finall hilltop in a sprint as was expected, with Tadej Pogacar taking an easy win in the sprint, beating Michael Matthews and David Gaudu – besides jumping onto the yellow jersey.

Positive: Pogacar taking the win and the yellow jersey.

Negative: Jumbo’s tactics can be judged. Although I understand WVA’s move was not meant to see a 3-rider group go up the road, it still feels like a waisted energy day. 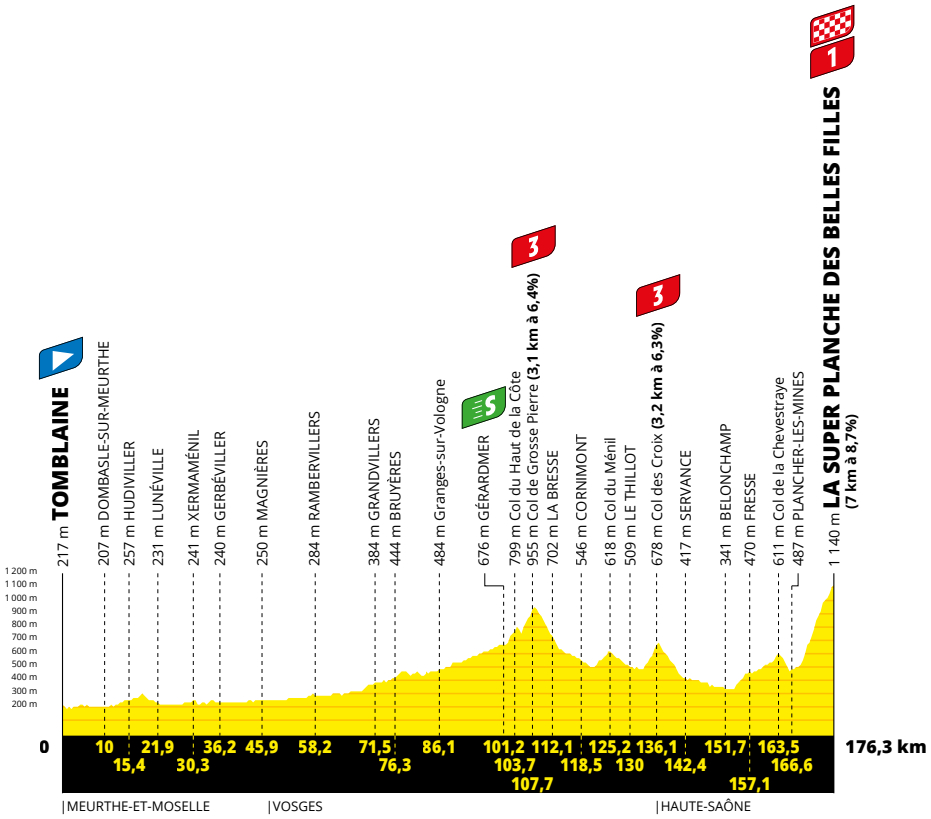 On the seventh day of the race the Tour de France reaches the mountains. There will only be one day in the Vosges this year, but as is traditional the Planche des Belles Filles will be climbed – once again. It is a 176-kilometer stage that will be a “one-effort day” and should thin down the riders that will be fighting for the top places in the race, as it’s the first real climbing test.

The first half of the stage is in it’s grand majority flat, without much of an opportunity for there to be spectacle. The intermediate sprint will come just after the 100-kilometer mark, and a sequence of hilltops will follow as the riders enter the rugged terrain. 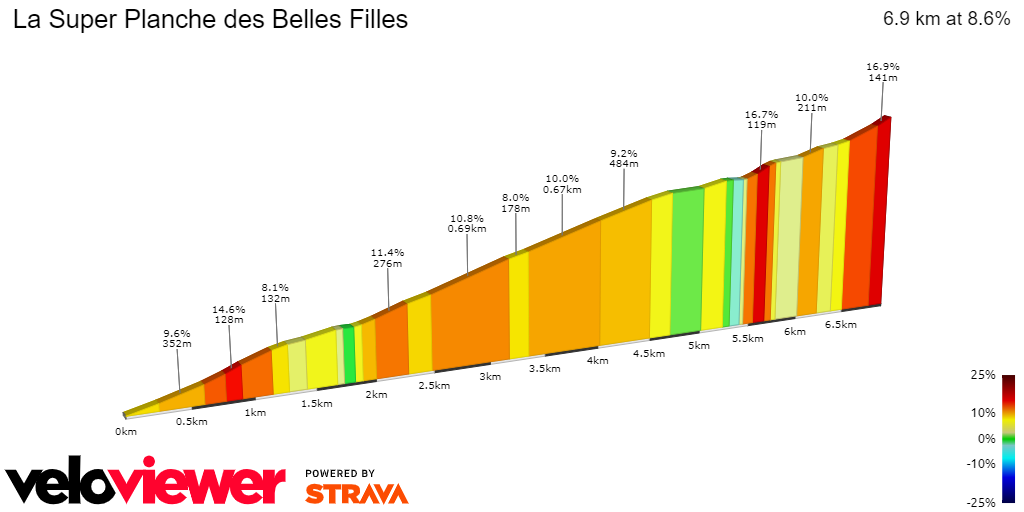 The riders will be focusing all their efforts on the final climb. The leadout into the ascent should be furious so the effort will be a little longer, and once the riders enter the hairpins the gradients will bite. The climb is 6.9 kilometers long, it has a tough beginning with some sharp gradients allowing for attacks to be dealt. 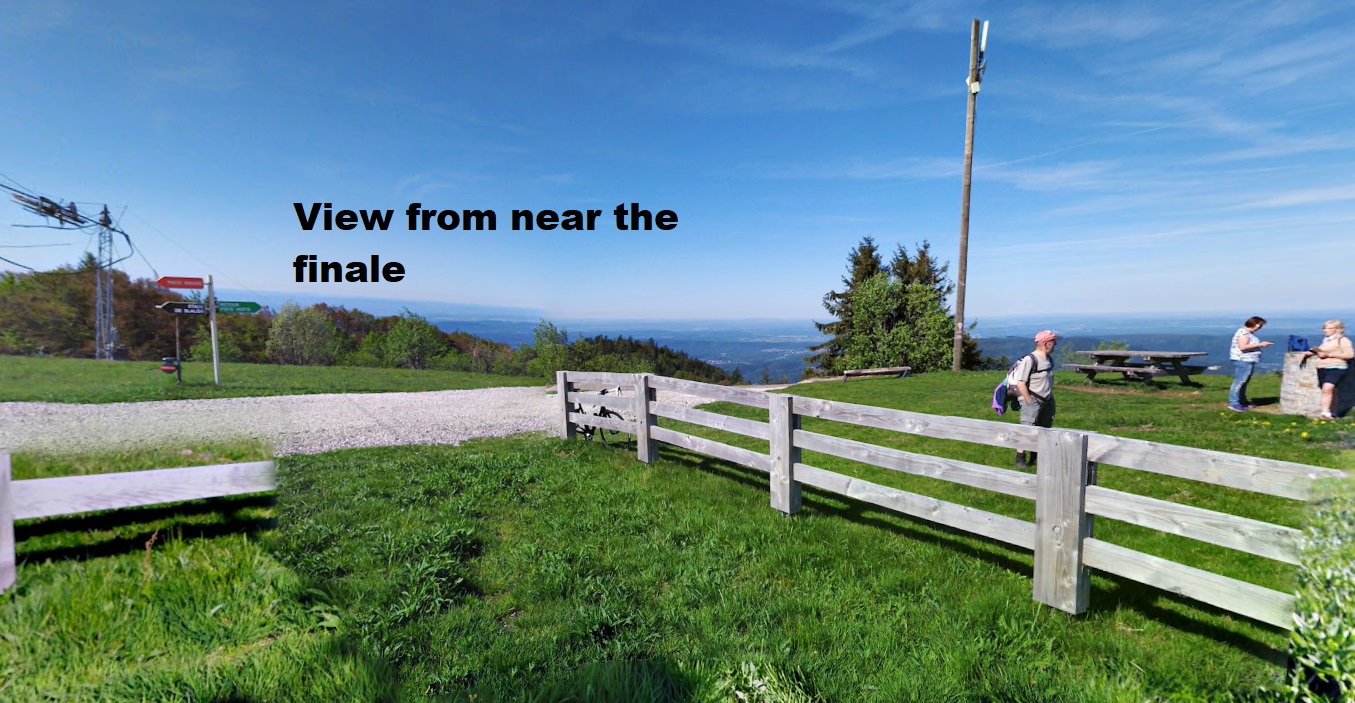 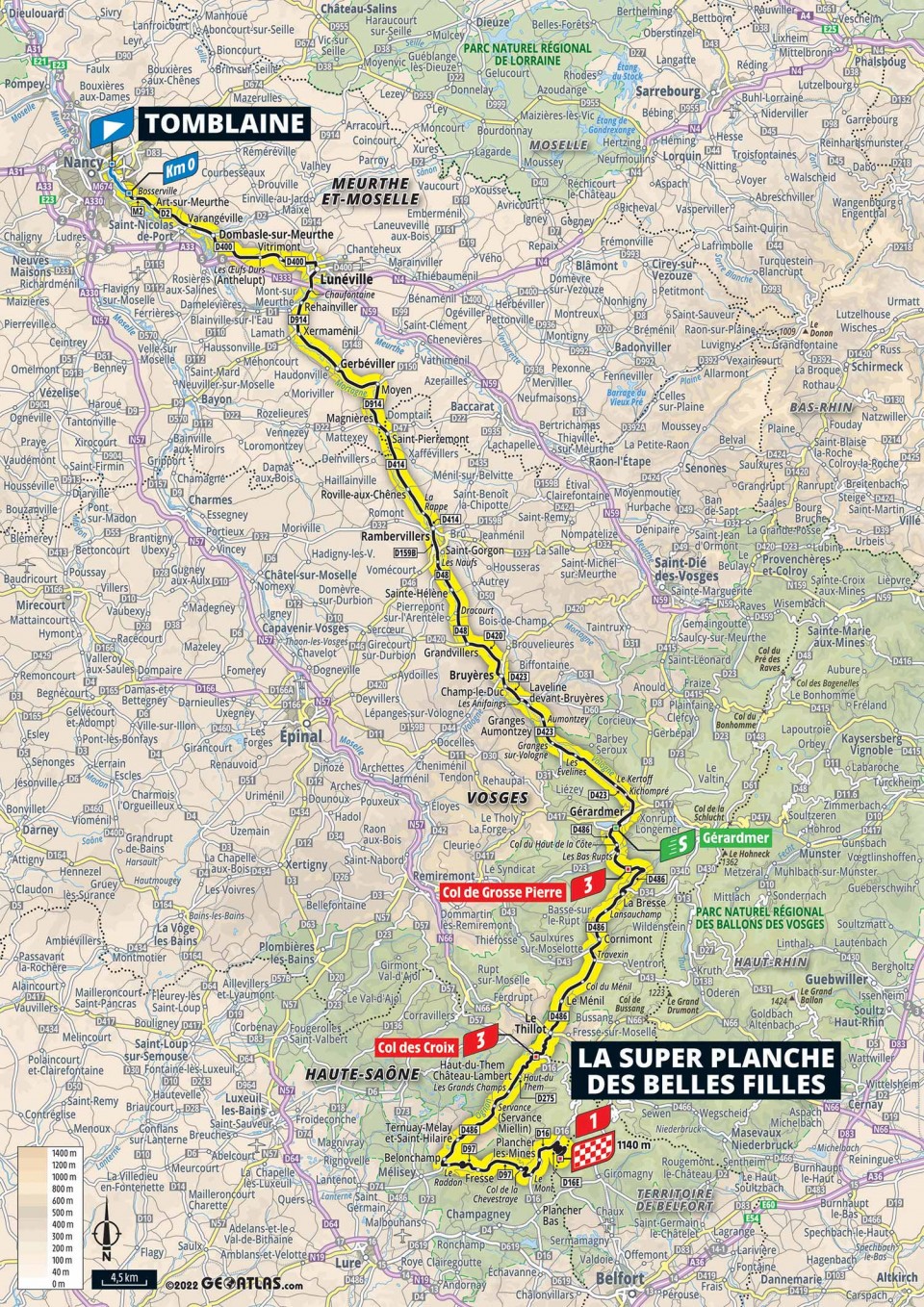 Calmer weather, with no real breeze present and the temperatures cool.

First mountain stage of a Grand Tour has traditionally gone to a breakaway in recent years as no-one wants to take up the yellow jersey. It’s a flat day, no incentives for anyone to work as Tadej Pogacar seems to be on a different level once again, meaning only UAE will likely work for a stage win which I find unlikely.

With that said, despite the flat start – as sadly most stages will have – I think the front group will make it, although I’m unsure if Pogacar will want to keep the yellow jersey or not.

Tadej Pogacar – The strongest climber in the race so far? It’s early to tell from what we’ve seen, but Pogacar has shown no signs of weakness. If he has the legs, he will attack.

Jonas Vingegaard and Primoz Roglic – Honestly I think Jumbo won’t and shouldn’t attack. They have lost enough time with Roglic yet. The Slovenian is giving good signs, but on a stage like this there is no chance at all to surprise or try and raid Roglic. Best to limit losses for now and look to do something in the stages ahead.

INEOS – Ineos I think they should do the very same thing. They have their three GC options alive, aswell as Tom Pidcock who can surprise. Martinez, Thomas and Yates will all benefit if they stay in the position they currently are in, and try to use their strength in numbers in more suited days.

The victory is likely to come from one of the riders above IF the peloton fights for the stage win. However there will be many more cards to play, in what will be the first real mountainous test of the race. Everyone will be measuring their legs, defensive racing by some is possible as they look to test how they feel against the competition. Aleksandr Vlasov, David Gaudu, Enric Mas, Damiano Caruso, Jakob Fuglsang, Nairo Quintana, Rigoberto Urán, Ben O’Connor, Alexey Lutsenko, Neilson Powless and Louis Meintjes are riders that I expect to see give it their all in an attempt to see what they can go in the fight for the yellow jersey.

From riders such as Gaudu, Vlasov and Fuglsang I would expected perhaps a stronger performance as they usually prefer shorter climbs – although this isn’t a particularly small ascent.

As for riders who could win from a breakaway it depends on what UAE wants to do. Do they want to keep the jersey? That will limit the riders who can win. Are they willing to give it away? Then a break win is certain and strong climbers will surely be in front. Dylan Teuns, Thibaut Pinot, Bauke Mollema, Michael Woods, Ben O’Connor, Ion Izagirre, Felix Grossschartner, Tim Wellens, Pierre Rolland, Ruben Guerreiro, Michael Storer and Jan Tratnik are all options – by GC order aswell.

#196 Hugo Houle – Let’s try and get in front with Michael. Jakob is going for the GC, so the rest look for stage wins. In a day like this he will not need much support, so let’s focus on the main goal. You can climb, but ideally you and some other guys help Michael get in the breakaway as it won’t be easy for him. Once there you figure the strategy – work if he’s the strongest, attack early if he isn’t to put pressure on others and he can follow wheels.

#111 Romain Bardet – Romain I want you do this and I will be very clear. Try to get in the breakaway. If you succeed then try to go for the stage win, who knows maybe even the yellow jersey – save up everything for the final climb, will be decided there. If you can’t purposefully drop back, we want stage wins here and you won’t get one if you keep fighting for a Top10.

#147 Neilson Powless – Neilson, you’re almost there! You’ve done a good job so far, but I won’t lie to you, you will not be on the yellow jersey after today – it is impossible to take time on Pogacar. We’ll support you, we can’t say if you should or not target the GC, but let’s test you. Ideally you should be able to hang around the Top5 at the end of the day. 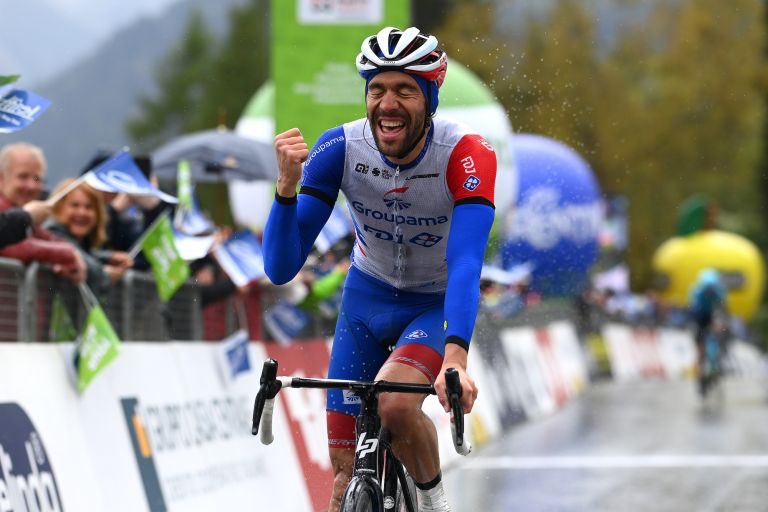 I have previewed correctly both of Thibaut Pinot’s wins this season despite being from breakaways. For tomorrow I foresee number 3, it will be a stage that the breakaway seems to be the favourite for, where only a strong climber can win, and he has both freedom, form and home fans to cheer him on.

Tomorrow’s race has prizes of at least €800 and an entry fee of only €5. Make good use of your knowledge! https://zweeler.com/game/cycling/FantasyTourdeFrance2022stage7/main.php?ref=790