A day where UAE Team Emirates did all they could to get the win. All day long the team of the yellow jersey chased hard, with the intent of having Tadej Pogacar win atop Planche des Belles Filles. The Slovenian took the expected win, beating Jonas Vingegaard in a close sprint after going through the last survivor of the breakaway Lennard Kamna in the final meters of the stage. Primoz Roglic climbed to third on the day. 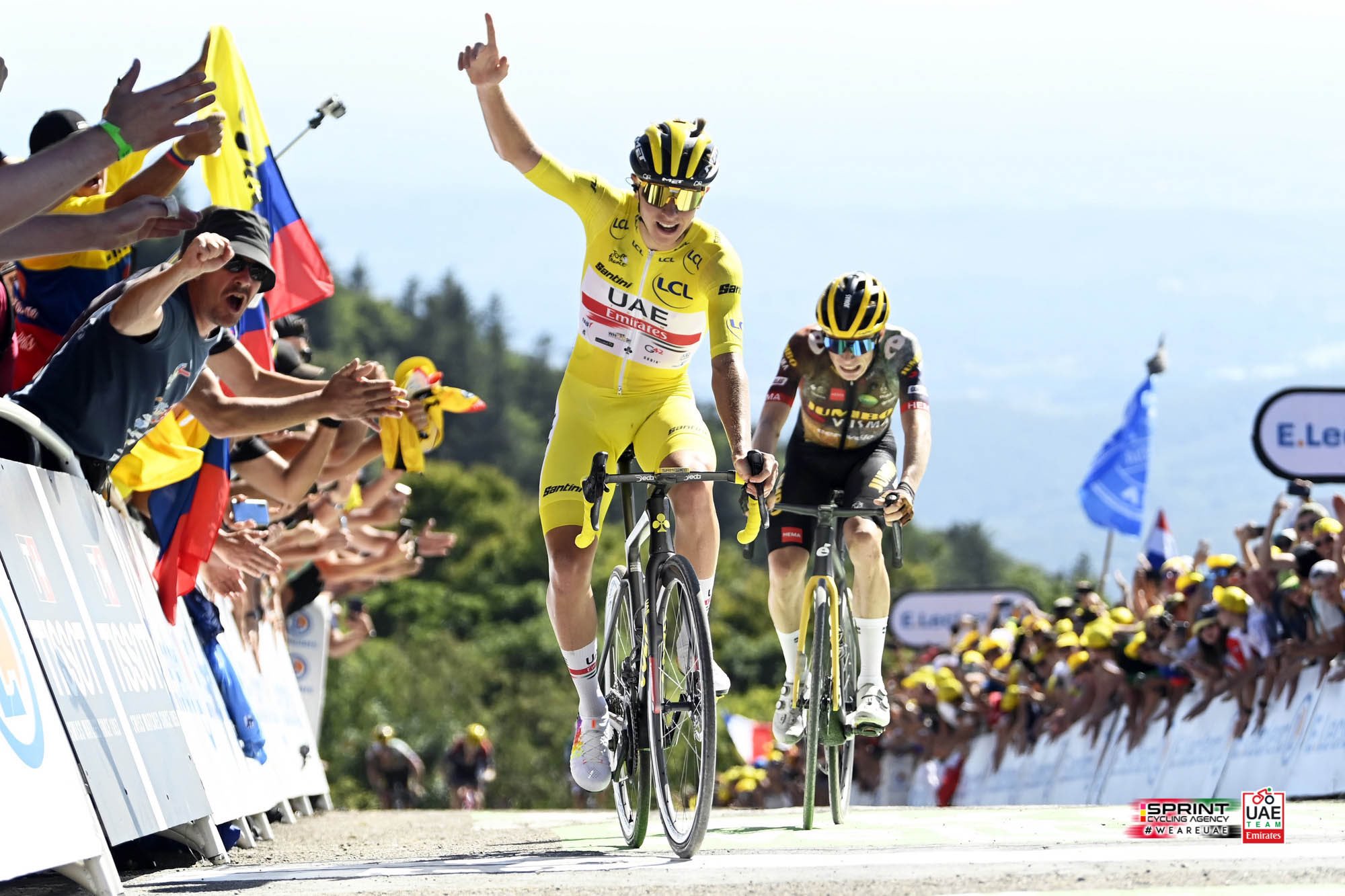 Positive: Pogacar giving the reward for all the team’s gruelling work all day long, Vingegaard matching him. To a degree it can also be said to be a good day for Roglic, who’s shown to not be suffering from the shoulder.

Negative: Aleksandr Vlasov and Jakob Fuglsang shedding some time comes as the biggest strikes of the day. Alexey Lutsenko has also lost important time in the fight for the Top10. 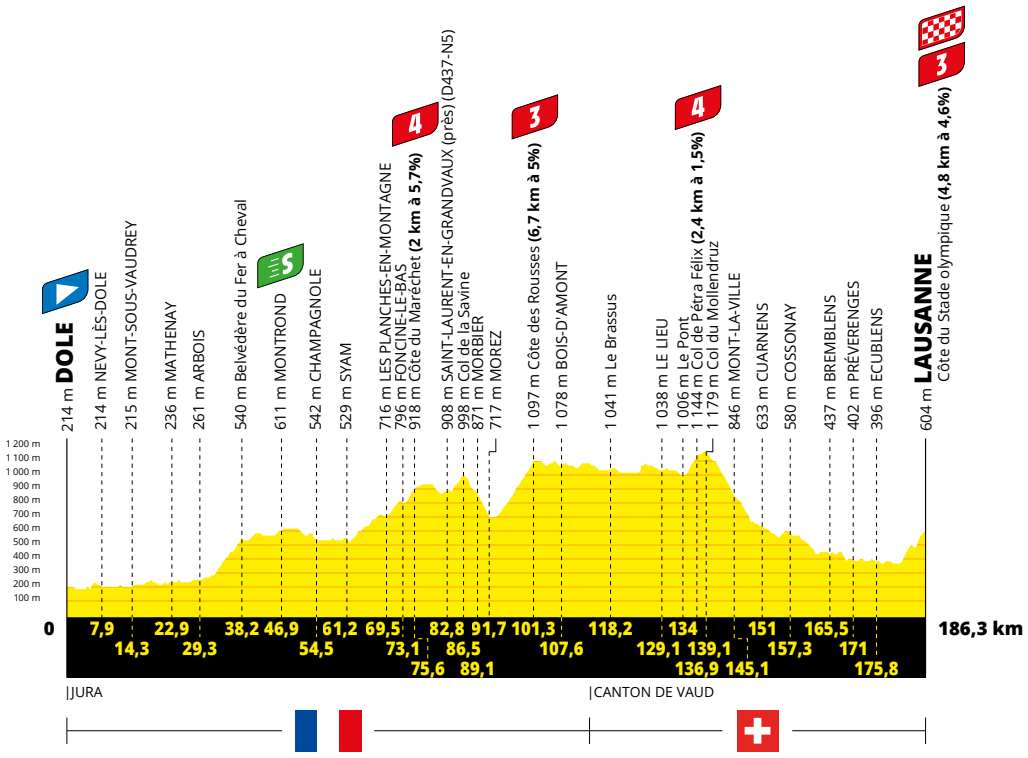 Stage eight will see the riders once again change countries, as the peloton will be heading into Switzerland for another finale away from French territory. This 186-kilometer stage will be an interesting day, suited to a breakaway but having a finale that will please the puncheurs, and even some climbers who can nowadays be as explosive.

There will be 2500 meters of climbing, however the winning effort will with no doubt be the final ascent. Throughout the day the peloton will traverse three categorized climbs, and the intermediate sprint before them all will also ensure some action. 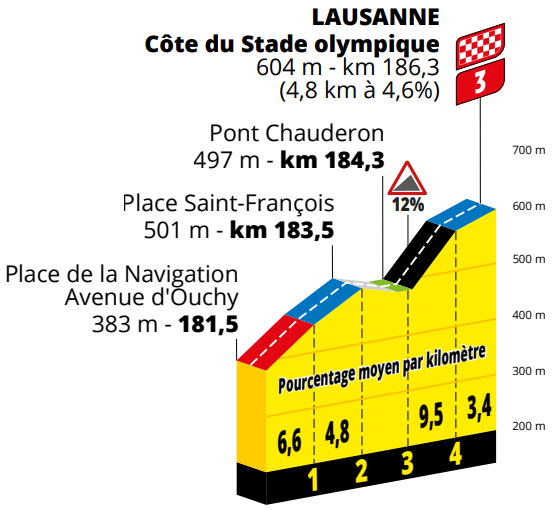 The day will end in the lake-side city of Lausanne, by the Olympic stadium. It will be an explosive finale, where several types of riders can thrive. The final climb is 4.8 kilometers in total with 4.6% average gradient, however that only tells half the story.

The climb is split into two sections, as the first two kilometers will average just above 5% and will be used to shed those who can’t climb with the best. There will be a whole kilometer with slight downhill gradients where the riders can rest a bit, but surely with a furious pace into the toughest ramps. The final 1.8 kilometers see 12% maximum gradient in the streets of Lausanne, before ramping back down to a false-flat drag that will take the riders into the line. A tricky finale to manage. 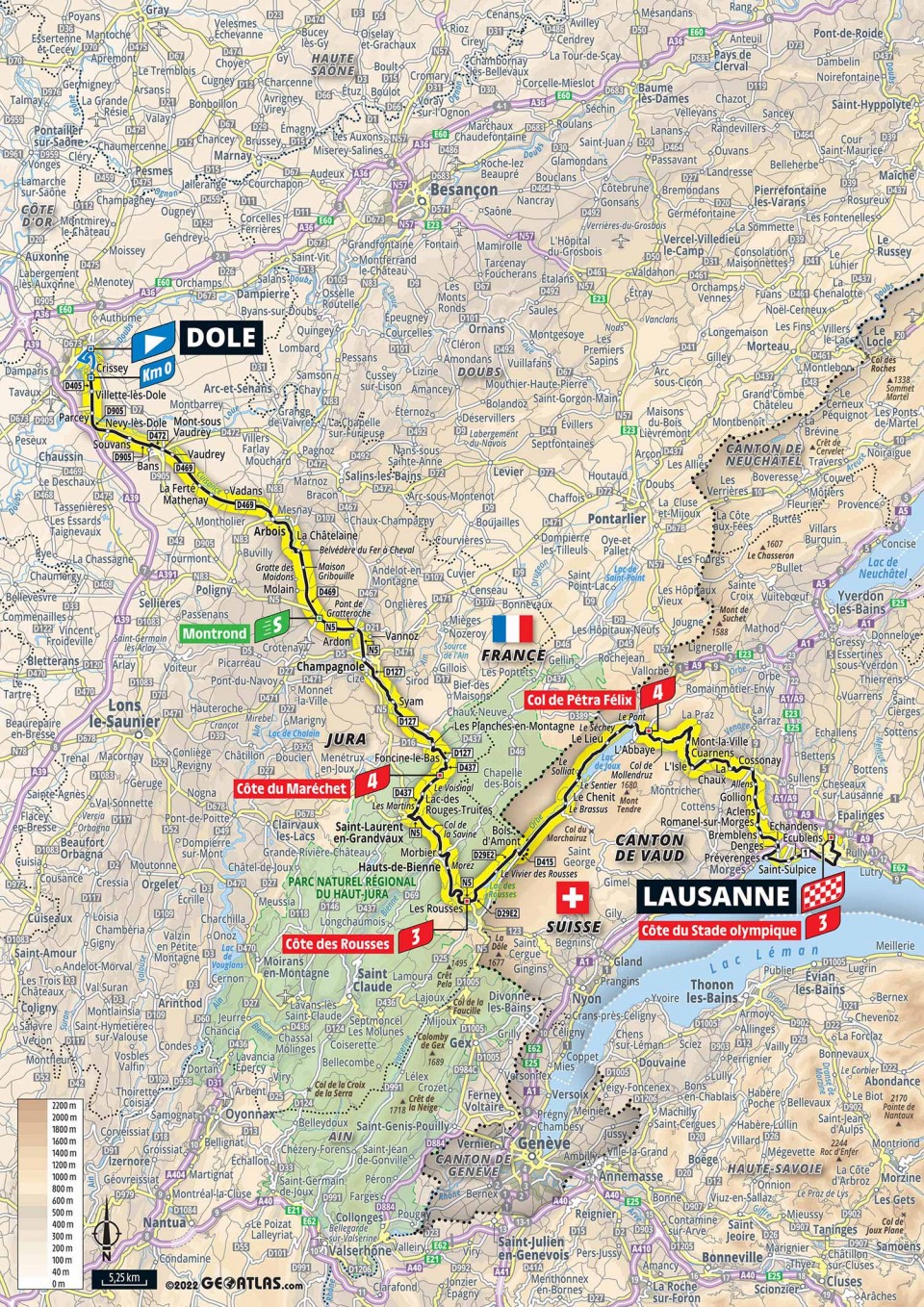 A modest breeze from the northeast. A crosswind throughout some of the day, but within the Swiss hills there will be several direction changes and covered sections. In the final ascent it also shouldn’t make much of a difference being in an urban environment, nevertheless it won’t be strong enough to create damage.

Initially I believed this would be a day for the peloton to fight for, because it’s a perfect finale for a rider like Mathieu van der Poel and Alpecin-Deceuninck could sacrifice themselves to control the race – with the help of someone else. However that’s not the case here.

Both Pogacar and Van Aert, the two clear favourites, have won stages and must save their teams for the important days. You could say the same with Pidcock and INEOS. There will be some riders with chances, but it has become a much harder day to control for the peloton as there won’t be as much interest.

Tadej Pogacar – Despite the incredible competition, it really is hard to see how anyone can beat Pogacar even though the finale isn’t extremely hard. His presence will demotivate others to work, and to burn half the team again to fight for a stage win would be a very strange strategy from UAE – although who knows, it’s worked today.

Wout van Aert – In my eyes the only rider who can match Pogacar in this finish. He does pack more of a sprint, but in uphill gradients it is a very even match. Will Jumbo work to control a breakaway? I doubt. Wout already has his win and green jersey, GC is now absolute priority – although if the situation fits he can surely win.

As for the puncheurs you will see Michael Matthews, Mathieu van der Poel and Tom Pidcock as those that have a strong sprint and could take in – that is, if they are on a perfect day! Surprises can emerge though. Max Schachmann, Andreas Kron, Alberto Bettiol, Andrea Bagioli and who knows maybe even Jasper Philipsen can be a part of it. The likes of Neilson Powless, Dylan Teuns, Pierre Latour, Victor Lafay and Mikkel Honoré are also valid options.

As for the climbers who carry some punch, or are in superb form and can have the legs to sprint well at the end of the day you will have David Gaudu and Primoz Roglic as the main names. Not the only ones though, as Jonas Vingegaard, Nairo Quintana and Geraint Thomas are also good options. If they have a better day, the likes of Aleksandr Vlasov, Jakob Fuglsang, Michael Woods and Alexey Lutsenko can also go for the win with a surprise attack.

As for breakaway chances the possibilities are many, specially as such a rolling day allows different types of riders to thrive. Depth can also be important as strength in numbers often makes a big difference if the escapee group is to thrive. In those terms you have the following: BORA with Patrick Konrad and Felix Grossschartner, Cofidis with Benjamin Thomas and Anthony Perez, Bahrain with Matej Mohoric and Jan Tratnik, Groupama with Kevin Geniets and Valentin Madouas, EF with Magnus Cort Nielsen and Stefan Bissegger, Lotto with Tim Wellens and Brent van Moer, Israel with Krists Neilands and Hugo Houle, and Trek with Bauke Mollema, Quinn Simmons and Jasper Stuyven.

As for riders which I consider big possibilities but perhaps as their only team’s option, I rate: Matteo Jorgenson, Silvan Dillier, Taco van der Hoorn, Warren Barguil, Alexis Vuillermoz and Franck Bonnamour.

Of course, some of the riders I mentioned above may also be part of breakaway attempts – and vice-versa. It’s an open day.

#203 Luke Durbridge – You’ve done a good job this last stage. In the mountains you’ll be able to take it “easier” if you could say that, but on this stage we need your firepower. It will be a day well suited to Michael, the last perhaps. Yes we have riders like Pogacar and Van Aert but we have to try, let’s try and organize your chase, with your big engine coordinating and keeping the moves under control.

#41 Aleksandr Vlasov – The task is simple, save as much as possible and stay in the wheels. It will be in the mountains that the differences will be made. We don’t want to loose seconds so you make sure you hang in the wheels, whilst some of the guys will look for the stage win in the breakaway.

#85 Luis León Sánchez – We have to try and do something early on. Damiano will have support from whoever stays in the peloton, but you and the guys – Dylan, Matej, Jan and Fred – will go ont he attack early on. We must have numbers in front and try to take a stage win. 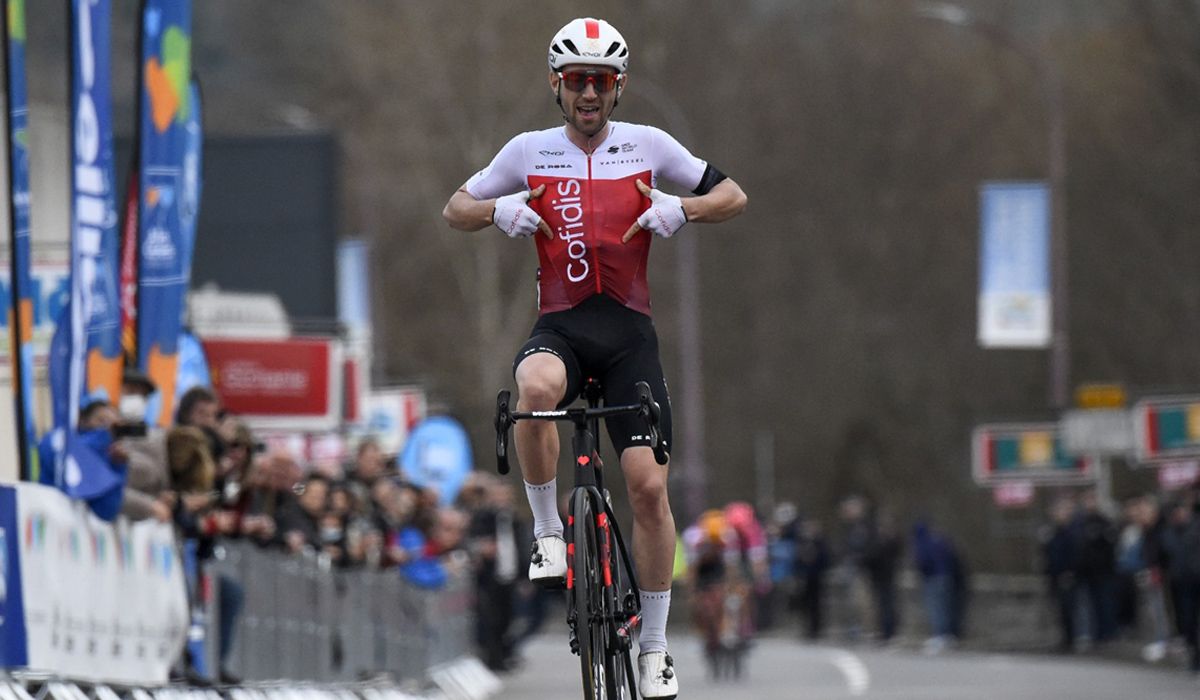 A win for the breakaway is what I expect. I think chances for peloton exist nevertheless though, but my call will be Benjamin Thomas to make Cofidis’ race.