The second mountain stage of the Vuelta a Espana once again delivered, with the same winner as the first as Jay Vine once again took a dominating win. This time from the breakaway, the Australian dispatched his companions in the final ascent for what was a strong win. Marc Soler and Rein Taaramae completed the podium, whilst Remco Evenepoel led the GC charge behind, with only Enric Mas and Primoz Roglic being able to keep up with the leader’s pace. 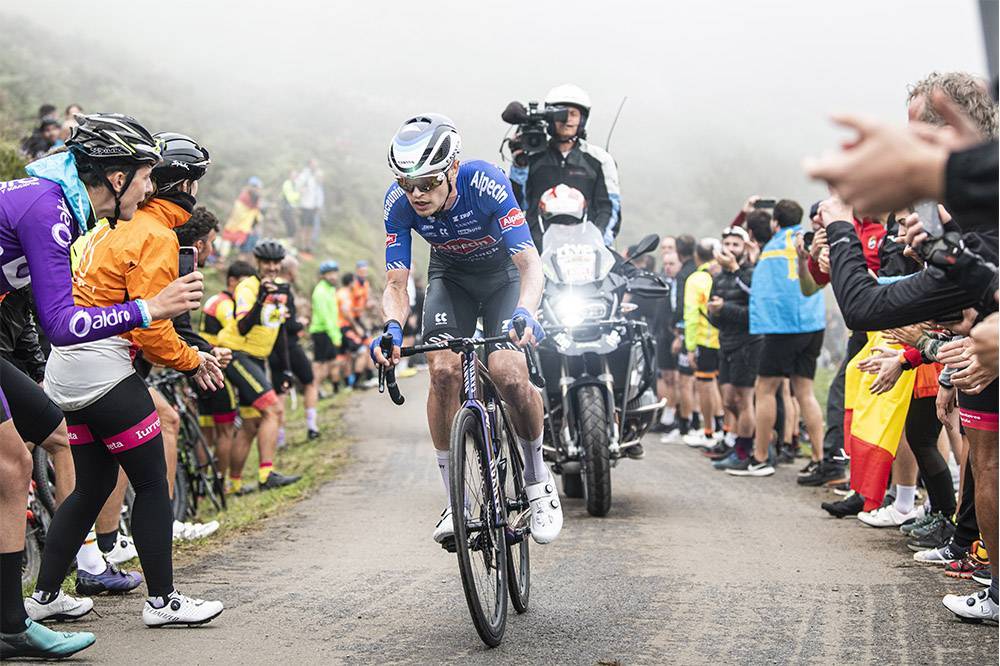 Positive: Vine taking a second win in impressive fashion and jumping into a clear KOM lead. Mads Pedersen riding into the green jersey with the breakaway.

Negative: Wilco Kelderman, Richard Carapaz and Sepp Kuss shed meaningful time and are virtually out of the fight for the overall classification.

The ninth day will be the last in the north of Spain, and although it doesn’t look like the traditional mountain day, it will be a very important one for the GC as the race will head deep into the rugged mountains of the Asturias en route to tackle on of it’s hardest and steepest ascents. 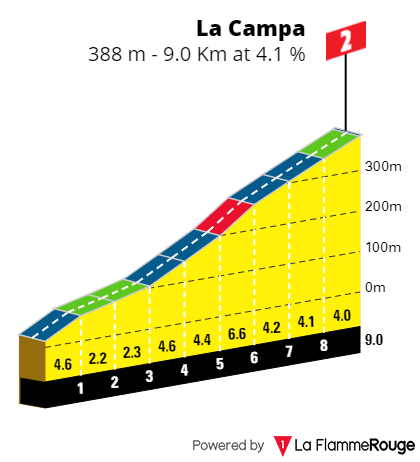 The climb to La Campa will summit with 23 kilometers to go, it won’t be complicated but it will feature a bonified sprinter at the top, and will further thin down the peloton. The group should remain relatively big however, and that will play a role in the furious leadout that is expected towards the final climb. 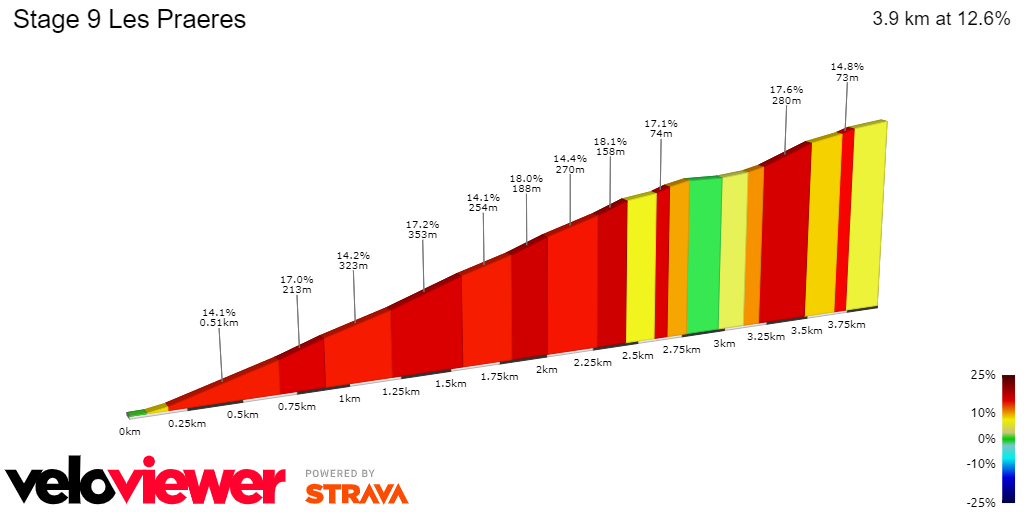 That will be to Les Praeres. As some would say, a goat track – a suiting description since the finale is located in a wide grassland inside the mountains. Officially it is a 3.9Km climb at 12.6% average gradient, incredibly steep however the first two 2.5 kilometers are mostly around gradients of 15%, a brutal effort from start to top where the peloton will just slowly be grinded until only the very best sit in front. It’s a 15-minute ascent, so the riders cannot risk gong into the red too early. Inside the final kilometer there’s a small flat section, but the brutal ramps go almost all the way into the finish. 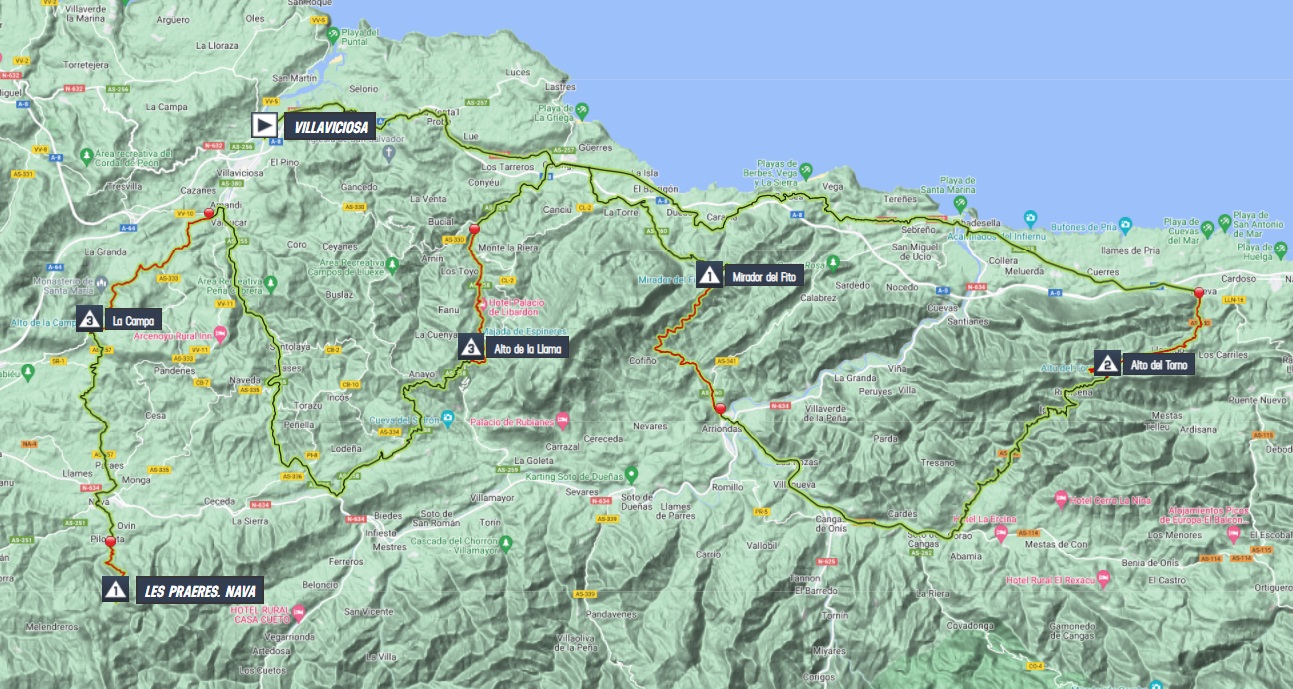 There will be a bit of an eastern breeze throughout the day, a headwind at the start, but overall it should not be crucial. The heat will tighten however, almost into the 30 degrees once again, which will bite in the climbs.

I think the tactics should be very similar to today’s, as Quick-Step as no reason to work seriously, and the start will feature some ascents. A strong breakaway will likely go up the road, and it will not be easy to bring it back.

Remco Evenepoel – Quick-Step showed good control today. Tomorrow will be an easier day to control, and the final climb team support won’t really matter. Evenepoel is showing the form, and if his San Sebastian performance showed something, is that he should thrive on this steep ascent once again.

Primoz Roglic – Having shown better legs than in Pico Jano, Roglic will be on his terrain. These 15-minute efforts are perfect for him, and although he shouldn’t feel much pressure on Evenepoel, I think he stands a chance deal a blow to him – but most importantly Mas and the rest of the field.

Enric Mas – So far Mas is keeping himself in a strong position. The third week will favour him, but in the meantime he’s showing incredible form. This climb shouldn’t be as suited to him as a pure climber, but he may be able to hold the wheels again.

Jay Vine – It would be hard to see him twice on a breakaway consecutively and win, but everything’s possible! Legitimately however, with 2 stage wins in the bag Vine may want to test himself for the GC, and he’s shown to have the legs to battle and beat the best.

In my fair opinion, at the time being it seems there are three riders above everyone else in Evenepoel, Roglic and Mas. Later in the race I expect that to change, but I believe this climb wil be resolved in the same way and you won’t be seeing anyone surprise alongside them towards the end. Additionally, this is a climb where there will be no slipstreaming, so it’s every man for himself, and most will be trying to arrive as close to the front as possible instead of thinking of ways to attack the race here – I don’t think there’ll be any sharp attack, but instead another change of pace from Evenepoel thinning things down.

The GC fight however remains far and wide. INEOS are down to three, with Carlos Rodriguez and Tao Geoghegan Hart standing clear from the other two, whilst in BORA Jai Hindley and Sergio Higuita now seem to be the two options aswell. UAE also have two cards in João Almeida and Juan Ayuso. Ben O’Connor, Miguel Ángel López, Gino Mäder and Thymen Arensman remain in the fight for the spots in the Top10 currently and will be looking to perform well again.

A breakaway can succeed however, and the further into the race the more riders will have that freedom. On such a day there will be some usual suspects in Mark Padun, Marc Soler, Rein Taaramae and Thibaut Pinot who have specifically shown good form over the last few days. Santiago Buitrago, Louis Meintjes, Alejandro Valverde, Kenny Elissonde and Élie Gesbert will be outsiders for the stage win aswell.

#98 Boy van Poppel  – It will be a complicated day Boy, stay with Gerben, we’ll try to keep him in the race, eyeing the next sprints where he may do something.

#191 Jetse Bol – Not a day for you Jetse, let the skinny guys attack each other and battle for their own results, you’ll have other opportunities.

#145 Lucas Hamilton – You’ve been given the freedom on this last stage, now it’s time to get back to the priority. The level is very high, whilst Simon is showing great form we have to protect him and you are the only one who can really keep up with him in the mountains. 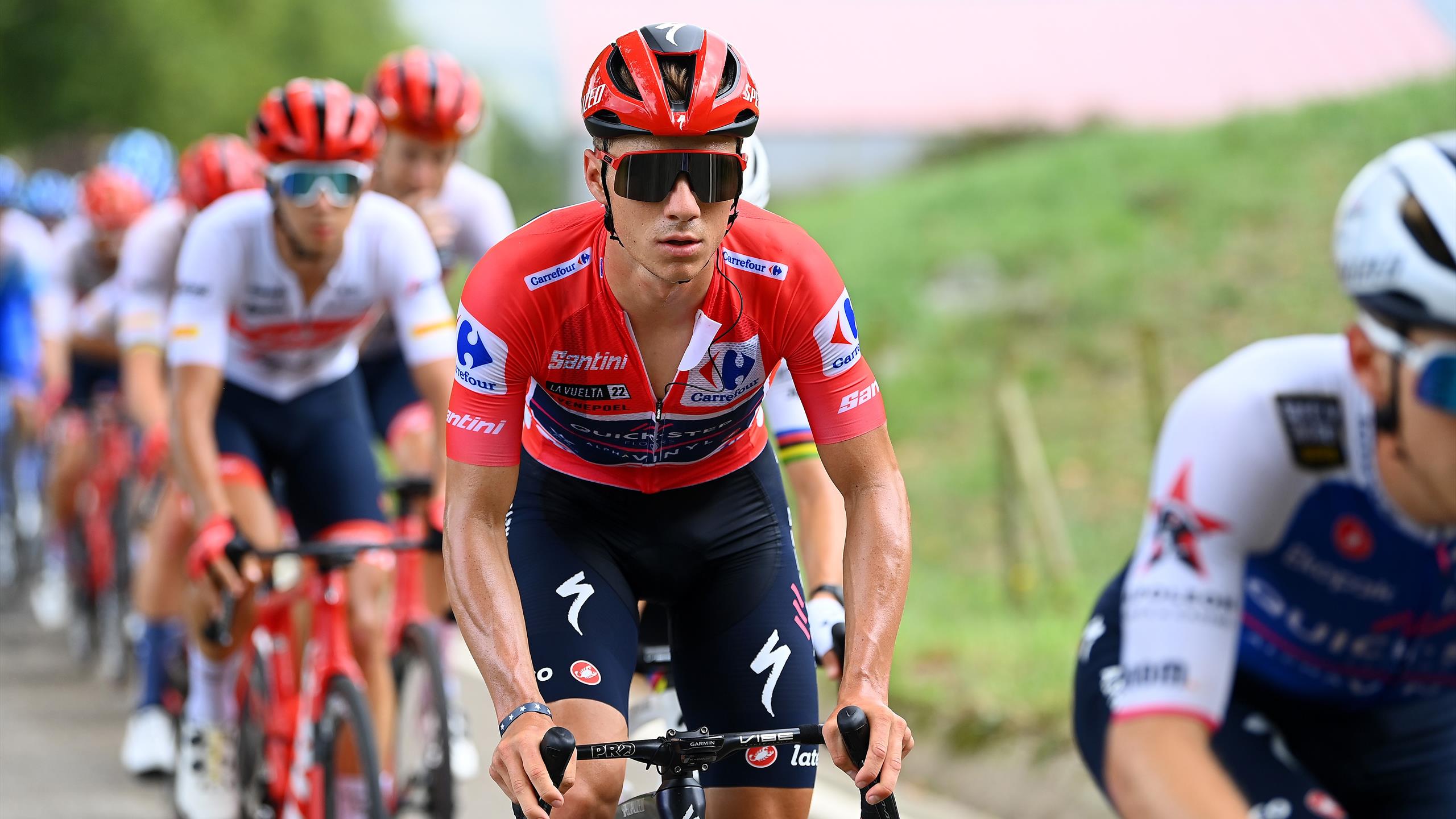 Although I think the stage can be so to say “offered” to the breakaway, what we’ve seen today was more evidence of the very high level in the GC riders. The big amount of ascents, the fight for positioning and the gruelling final climb may see the gap cut enough to see the GC battle become a stage win battle aswell, and I expect Evenepoel to strike his opponents again in a climb that should suit him.